"It's always the hippies' fault": Why the left treats its idealists all wrong

While the right lionizes its idealists, the left blames and scoffs at its own. The difference is changing America 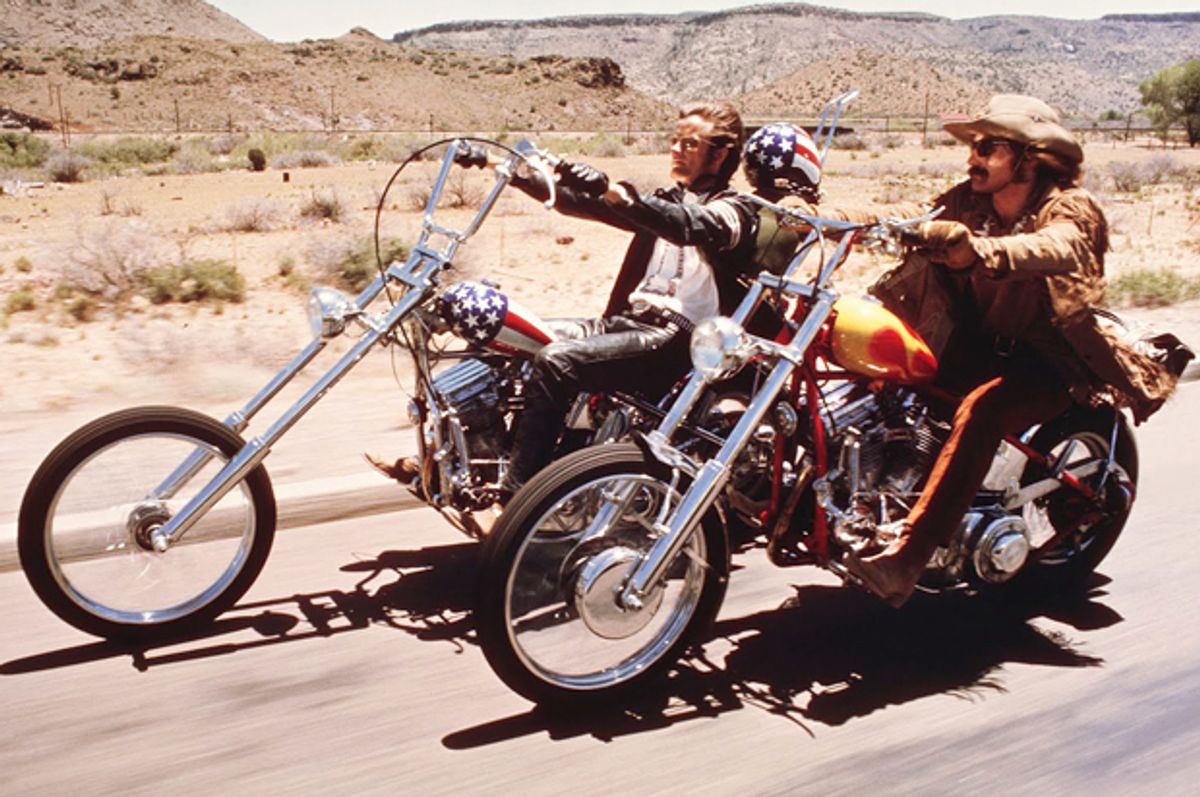 Last week the Internet was buzzing over the New York magazine cover story by Jonathan Chait in which he took the so-called Social Justice Warriors to task for their thuggish use of political correctness to make people feel uncomfortable on social media and shut down the important discussions that would surely happen there if only they would stop intimidating everyone with their tweets and comments.

It is worth noting that the notion the crazy lefties stand in the way of the Very Serious liberals who are trying to get things done is a trope of long standing. In fact, the governing principle of the New Democrats of yore was based on the belief among the smart folks in the political establishment that the hippies had ruined everything and it was time to take the party back.  And the Democratic establishment has been blaming them for their failures ever since.

Here's a case in point as reported by BuzzFeed yesterday in a piece that ponders the question of why California has failed to further legalize pot.  After all, it was the first state in the nation to pass medical marijuana and the state has shown no ill effects from the practice over the course of the nearly 20 years it's been available.  It points out the fact that California's ballot initiatives have become something of a business and billionaire's playground, costing vast sums to succeed, and unfortunately there don't appear to be any California businesses or billionaires who see marijuana as their pet cause at the moment. (Bill Maher, pick up the white courtesy telephone please ....) In fact, the state's experiment in direct democracy has become as undemocratic as it gets.

But the story BuzzFeed tells is about the infighting between a group of savvy, national pro-marijuana organizers and a band of illogical homegrown zealots who are standing in the way of real progress due to their lack of sophistication and strategic know-how that goes back 20 years. According to the article, in the early days back in the 1990s, a time when Democrats all over the country were running on the issue of pot being a "gateway drug" and supporting the arrest of anyone who knew the words to "Scarlet Begonias," the foolish hippies blew it by passing the first medical marijuana bill in the country despite these huge odds. You see, they didn't know how to write a proper marijuana bill so it had tons of problems and holes in it that made it difficult to defend in the ensuing years. One might expect that since it was the first initiative of its kind in the nation, but no, they should have known even if nobody else did.

Meanwhile as the federal government and local police agencies did everything they could to harass, shut down and steal the proceeds from these activists' businesses, the article tells us that making medical cannabis was  "never meant to be this disorganized," assuming apparently that there was some grand plan at the time. But there wasn't. These activists were the people who were making it happen, at great risk and cost to themselves, at a time of tremendous opposition. But, as usual, they were kind of embarrassing in their amateur zeal, especially with that veneer of old-fashioned '60s-style counterculture.

Next, the Democrats in the legislature wrote what the article terms an "absurdly named" bill called SB 420, which attempted to fix some of the problems.  The hippies had made it so difficult for them with that first in the nation initiative, however, that they were unable to make it perfect and bad things continued to happen.  But as time passed, medical marijuana and legalization became a more mainstream affair and the political professionals and national organizers decided it was time to take the reins. And thus began the tug-of-war between the hippies and the Very Serious Professionals that exists to this day in California.

You have to read the whole thing for the details of how each successive election cycle, the death of a pro-pot billionaire and the ongoing alleged perfidy of the grass-roots (no pun intended) activists to get the full picture. Yes, the local activists are a brittle lot and they have made mistakes. Lots of them. But so have the professionals with many fewer excuses for doing it.  In fact, they ran the last campaign in 2014 all by themselves. They had told the locals that they wouldn't get involved in a midterm composed of conservative older voters and the locals decided to run a poll with their own money to see just whether that was a bad idea or not. When it turned out that the off-year electorate was in favor, the national group put their own initiative on the ballot and ran the campaign all by themselves with no local interference. And they lost too, in a cycle when other states managed to pass theirs. You would think that at this point people would stop blaming the hippies for the problem and start trying to find out what's the matter with California.

But no. The BuzzFeed article contends, without any evidence, that this happened because people who supported legalization saw some literature from the local activists that persuaded them not to vote for it. But as a Californian I can tell you that this literature was kept very well hidden from the average voter. Still, as you can see, it doesn't matter who's in charge -- you can be sure if a liberal cause loses, it's always the hippies' fault.

This is one major difference between the right and the left in American politics. Both sides have their activists and their idealists who are inevitably going to be difficult to work with.  After all, these are people who often work for decades against all odds and outside the mainstream on causes they believe in without much chance of ever seeing them come to fruition. Because of the requirements of that job they are often eccentric and iconoclastic. You can't do this sort of work if you are a conformist. But they are the ones who lay the groundwork over time to make what was once the unthinkable, thinkable, and are therefore extremely valuable to the system. They are particularly valuable to the left, which requires such work to make progress possible.

On the right, they treat these people as equals and welcome them into the fold. That has its problems but it shows a much more respectful attitude toward the democratic process.  On the left they treat their activists like embarrassing relatives they wish they could lock in the attic. And that's odd considering liberalism's alleged affinity for the common man.  Maybe they could spare just a little of that famous compassion for the hippies who work their hearts out for the cause once in a while. It might even end up getting some results.