Jeb Bush's humiliating whiff: Why bad polls and a lame speech are killing his hype

Asked about his detail-free talk on poverty and opportunity Bush told reporters "More to come on that." But when? 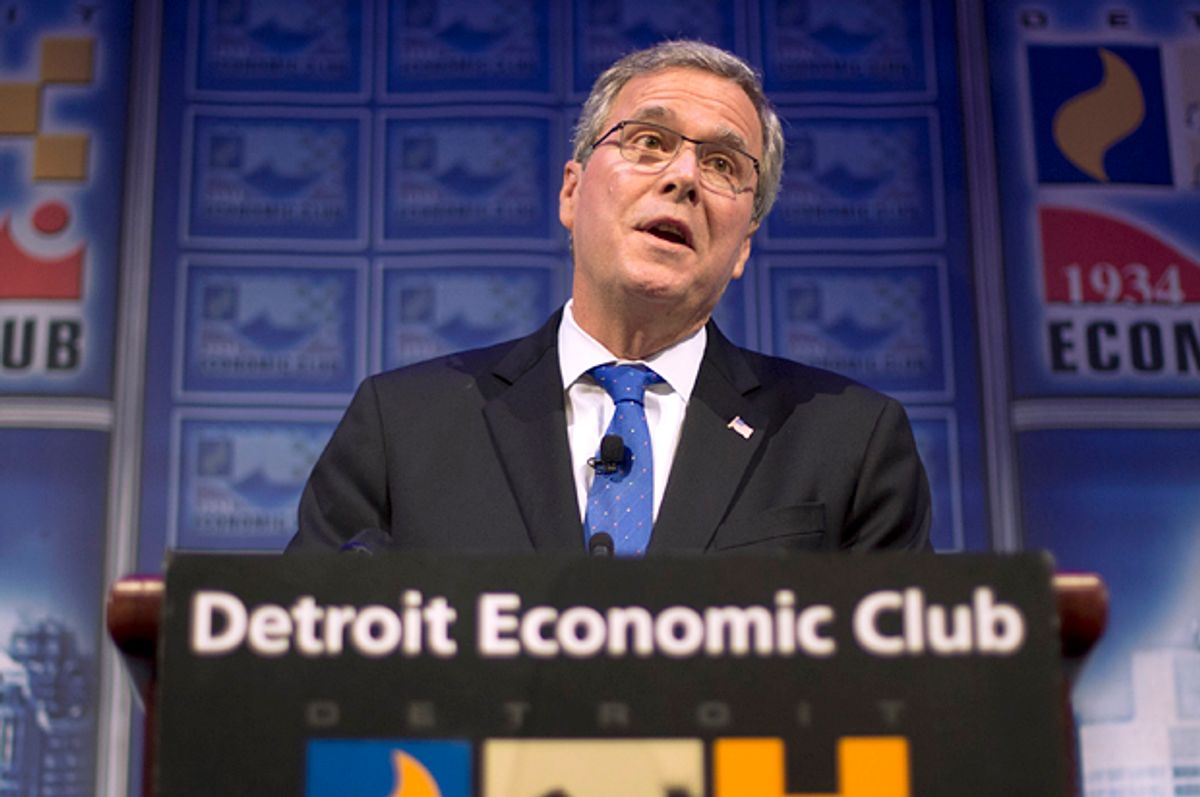 It was supposed to be a big deal: On the heels of Mitt Romney’s withdrawal from the race, alleged GOP 2016 frontrunner Jeb Bush planned a speech in Detroit where he was supposed to tackle issues of poverty and opportunity and claim the mantle of “reform conservative.”

Bush’s interest in these issues doesn’t really make him all that special in the GOP: All the Republican 2016 wannabes are touting their concern about poverty and the growing U.S. opportunity gap. Sen. Marco Rubio wrote a book about it. Sen. Rand Paul attacked it in his State of the Union reply. Gov. Scott Walker swung at it in his widely praised Iowa speech two weekends ago. A semi-movement of so-called “reform conservatives” has begun agitating for more attention to inequality of opportunity, pushing solutions mainly through the tax code. The details are sketchy, but at least the interest is there.

With the advance attention Bush’s speech was getting – Time hyped it as “intended to broaden the reach of the Republican Party and focus the coming presidential campaign on the economic plight of the American middle class” and “Bush’s first attempt to define himself on the public stage,” I assumed he would lay out specifics – but I assumed wrong.

Indeed, Bush declared himself a “reform conservative,” but he never defined what that meant in terms of policy. He called “the opportunity gap” the “defining issue of our time,” and blamed government for ignoring it. “If Americans are working harder than ever, earning less than they once did, our government and our leaders should step up, offer a plan, fix what’s wrong — or they should step aside,” he said.

But the former Florida governor failed to do anything like “step up, offer a plan, fix what’s wrong.” He mouthed GOP platitudes about growth, seeming to believe we can grow our way back to shared opportunity. But in fact the Obama recovery he scorned has shown us that growth alone doesn’t reduce inequality or restore opportunity. A growing number of economists believe inequality is a brake on economic growth, and that putting more money in more hands would accelerate growth rates.

Setting his first big speech on opportunity in Detroit seemed to be a way for Bush to poke at Democratic-run big cities, and fight the idea that Republicans are the party of the white suburbs. “I know some in the media think conservatives don’t care about the cities. But they are wrong,” he said. “We believe that every American in every community has the right to pursue happiness.”

Yet Bush said absolutely nothing about how he would help Detroit residents pursue happiness. It could have been a bold, attention-getting event: in a 2013 speech that coincidentally became public on Wednesday, he advocated that the declining city repopulate itself by welcoming more immigrants.

"It just seems to me that maybe if you open up our doors in a fair way and unleashed the spirit of peoples' hard work, Detroit could become in really short order, one of the great American cities again," Bush said. "Now it would look different, it wouldn't be Polish...But it would be just as powerful, just as exciting, just as dynamic. And that's what immigration does and to be fearful of this, it just seems bizarre to me."

Bush did not repeat that proposal Wednesday. All the Detroit venue did was remind the media that Bush, like Romney, opposed Obama’s 2009 auto restructuring that saved 1.9 million jobs. If you expected Bush to bravely tackle that irony, maybe explain why he had a better answer for the decline of Detroit and the American auto industry, you were disappointed. He said absolutely nothing about it.

It wasn’t just the speech that was devoid of specifics. In a brief interview afterwards with Jonathan Martin of the New York Times, Bush didn’t appear to have delved very deeply into policy solutions to the issues he outlined. As Martin wrote:

Mr. Bush offered few answers to address the problems he described. In a brief interview after his speech, he did not say whether his policy prescriptions would be tailored to help the neediest Americans or would more resemble conservatives’ traditional solution of cutting taxes across the board.

He did not directly answer when asked if cutting marginal income tax and capital gains rates would help those in need. He said working-class Americans would benefit from simplifying the tax code, overhauling immigration, embracing the country’s new energy sources and improving the education system.

Pressed on whether he would pursue the targeted tax breaks being pushed by so-called reform conservatives, Mr. Bush said, “More to come on that.”

“More to come on that?” Why not wait to stage your first groundbreaking policy pronouncement until the day "more" has arrived?

Bush’s swing and miss speech comes on the heels of a Quinnipiac swing state poll that showed him losing badly to Hillary Clinton in the crucial states of Ohio and Pennsylvania, and trailing her by one point in his home state of Florida. The business wing of the party clearly likes what it sees in Bush, but voters may not, and nothing he did Wednesday in Detroit did anything to convince skeptics.