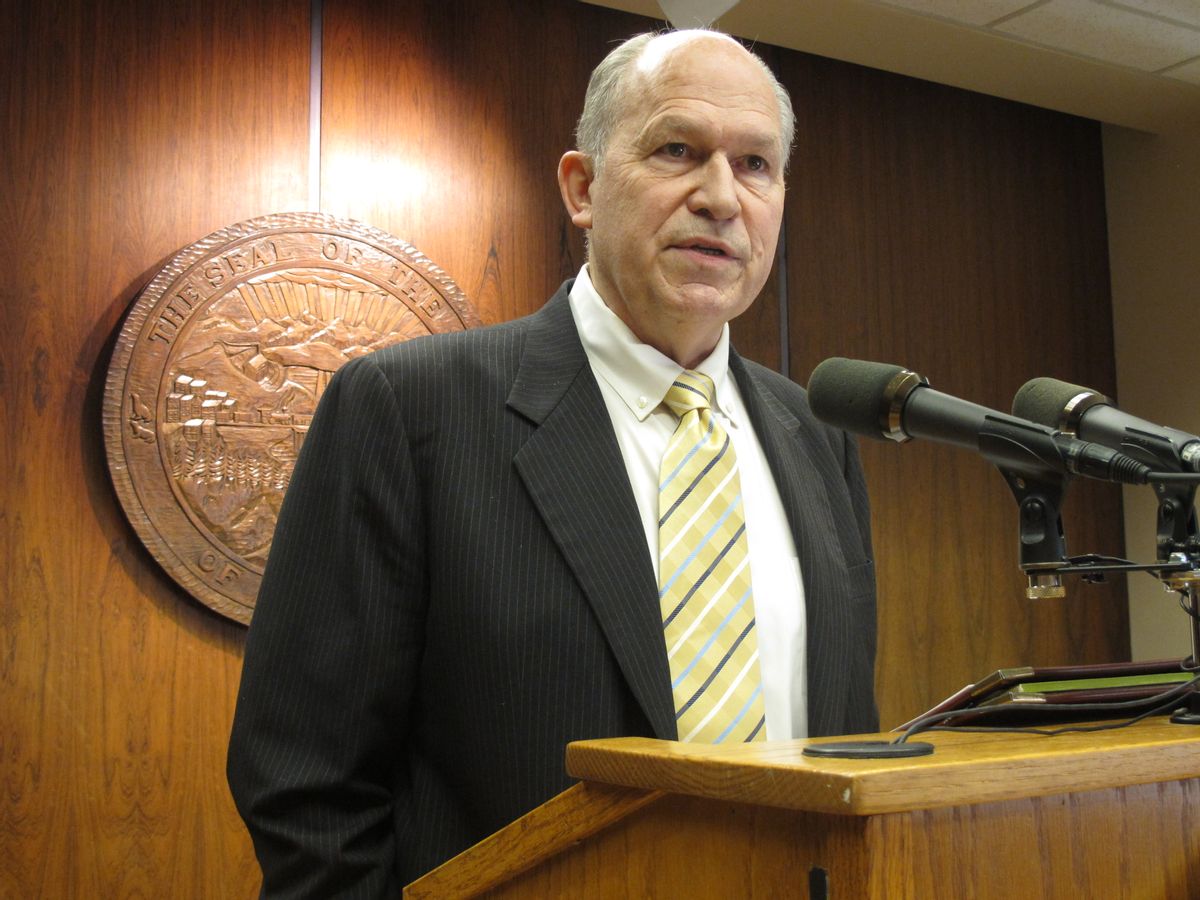 Gov. Bill Walker speaks to reporters after releasing details on his budget proposal for next year on Thursday, Feb. 5, 2015, in Juneau, Alaska. (AP Photo/Becky Bohrer) (AP)
--

Walker told reporters he didn't enjoy presenting such a budget proposal but he said it was necessary, with the state drawing about $10 million a day in savings. Cuts won't fill the projected gap, and the state will have to continue to dip into savings to get by.

Walker on Thursday proposed cutting about $550 million in total unrestricted general funds, according to information provided by his budget office. That is money that isn't restricted in its use. The total proposed budget authorization is about $12.8 billion.

The state's budget deficit is projected to be about $6.9 billion between this year and next.

Of the positions proposed for elimination, it's anticipated that more than half are vacant or are expected to become vacant because of retirements or attrition, said Walker's budget director, Pat Pitney. The list of reduced positions includes 85 within the University of Alaska system.

Republican Rep. Mark Neuman, co-chairman of the House Finance Committee, said the state is going to have to face government job cuts.

Walker's proposal is a starting point for talks, one that lawmakers have been eagerly anticipating from the new governor. Some lawmakers have suggested the overall cuts might not be deep enough, while some proposed cuts have already caused a stir, such as Walker's proposal to cut $52 million in additional school money for next year and 2017 — money that was included in a hotly debated education bill last session.

Falling oil prices have exacerbated the deficit. While Alaska has billions of dollars to dip into in the constitutional budget reserve fund, spending levels and oil prices will help dictate how long those savings last.

The North Slope oil price Wednesday was about $50 a barrel. It was around $107 when lawmakers ended their last session in April.

Walker and lawmakers have been bracing the public for cuts and plans to slim down the size of government. Walker has said he asked his commissioners to look at the potential effect of 25 percent cuts to their departments over four years.

"There's no painless reduction. You either do something completely different or you do less because you have fewer people to do the job," Pitney told reporters Thursday.

Part of the discussion is finding efficiencies and ways agencies can work together or services can be delivered differently.

Walker — who has called the fiscal situation an opportunity for constructive change rather than a crisis — said the state must be smart about cuts it makes to avoid throwing itself into an economic tailspin. There's no need to do that, he said, adding that the state can manage its way out.

Walker plans to continue to push Medicaid expansion, which he said could lead to cost savings. That issue is expected to get scrutiny as budget talks progress.