Could this finally be Beyonce's year? 15 questions about this year's Grammy Awards

Sunday is music's biggest -- and most confusing -- night 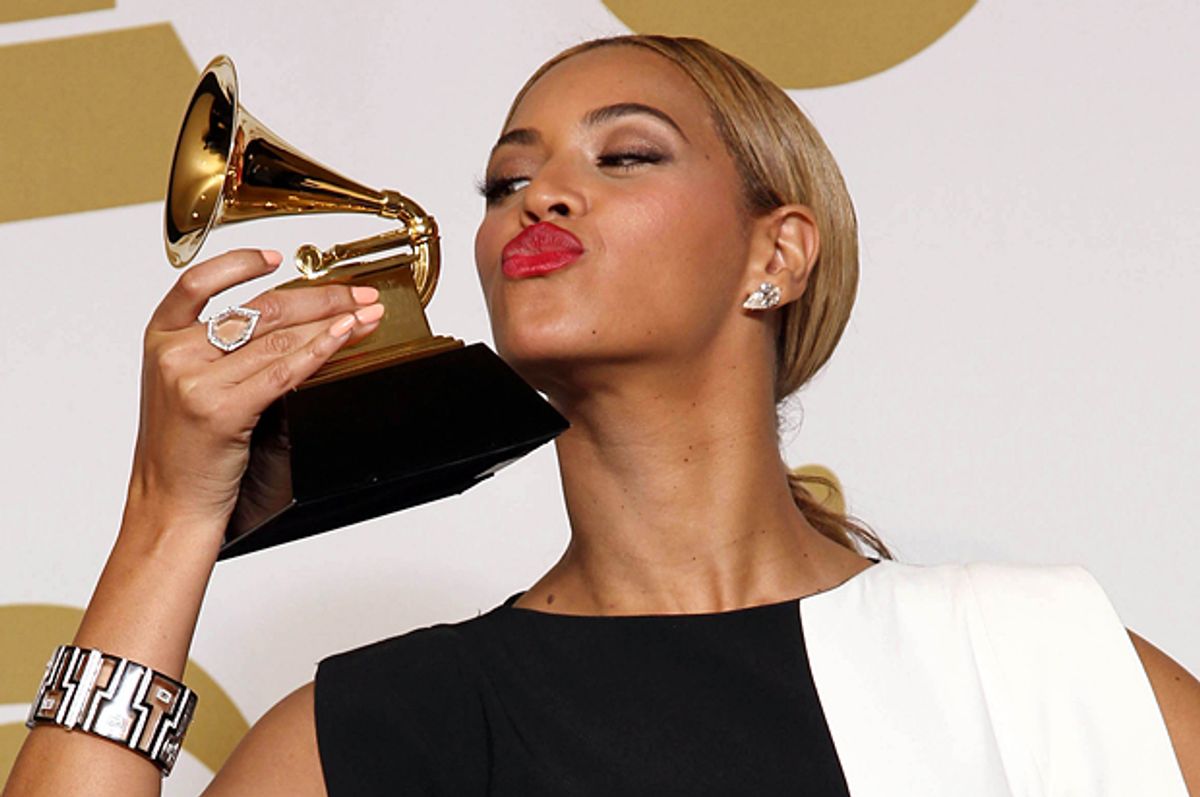 While you probably already have your Oscar ballot filled out, the narrative surrounding the Grammys always tends to be a little more muddled. While the Oscars still have the sheen of prestige, the Grammys have long been denounced as a questionable arbiter of taste, with many viewing the annual presentation of the gilded gramophones as a cheap popularity contest at best and a ridiculous farce at worse. Add to that the bloated runtime, bizarre duets and archaic eligibility requirements, and the evening can be a lot to wrap your head around. Still, it is music’s biggest night, and you’re obviously going to be watching, aren’t you? Here are 15 major talking points to get you ready for the festivities.

1. To start with: Who are the nominees?
Good question! You can see the full list here.

2. Wait -- why are there 82 categories?
Yeah... the Grammys have a lot of categories. Fortunately, only the major awards will be presented during the telecast -- about 70 of them will be given out ahead of time. And the telecast will still feel too long.

3. Who is hosting?
Inexplicably, LL Cool J hosts the Grammys ever year (well, at least for the past four). He is a hilarious host. Come for the earnestness, stay for the nonstop lip-licking.

4. Could this finally be the year of Beyonce?
While it certainly seemed like last year was the year of Beyonce — recall her show-stopping “Drunk in Love” performance at the 2014 Grammys, which came just weeks after her surprise-drop — she also wasn’t eligible for any best album nods, because the nominee eligibility period only runs through the last day of September. While Bey has never won Grammy’s top honor, the album of the year trophy, this might finally be the year she takes home the big prize.

She's performing again, too: alongside John Legend and Common in a performance of “Glory,” their Golden Globe-winning “Selma” track.

5. Is Sam Smith this year's best new artist?
Maybe, yeah. The British crooner is having a huge year, with six nominations — the same amount as Bey and Pharrell — and he is widely expected to take some trophies home, particularly in the Best New Artist category. However, he might not necessarily want to win this category, which is often said to be cursed.

6. What's the deal with Sia?
You may not have seen Sia Furler's face, but you’ve definitely heard her songs. The notoriously publicity-shy Aussie songwriter has been churning out pop hits for a decade — think Rihanna‘s “Diamonds,” Beyonce‘s “Pretty Hurts,” and tons more — but she truly reached a mainstream tipping point this year, with her radio-friendly party-anthem “Chandelier” hitting the top of the charts and garnering her a nomination for best record of the year. Her performance should be one to watch too, considering she never shows her face while performing: Her videos for "Chandelier" and "Electric Heart" featured pint-sized dance prodigy Maddy Ziegler as a Sia stand-in, while her many buzzed-about public performances only showed the back of her head.

7. What the hell is an Ed Sheeran?
The 23-year-old British singer-songwriter and Taylor Swift BFF — he joined Swift on her 2013 Red tour — has ascended to veritable teenybopper heartthrob status over the past year (surprising, because with his goofy grin and mop of orange hair he looks more like a distant Weasley relation than a One Direction member). As Spotify's most-listened-to artist of 2014, Sheeran has a serious fan following -- and two nominations, for best pop vocal album and album of the year -- so you best take him seriously (or Taylor will mess you up).

8. Do the Grammys have a race problem?
Err, possibly. Much like the Academy Awards, the Grammys are also not immune to diversity issues. For the first time since 1995, every best new artist nominee is white, and so are all the contenders for the record of the year and song of the year.

The Grammy’s have also been criticized for their lack of vision when it comes to rap and hip-hop; Last year, Macklemore and Ryan Lewis won rap album over favorites like Kendrick and Kanye, generating major backlash among hip-hop fans (even Macklemore agreed he didn’t deserve it). If Iggy Azalea triumphs in the best rep album category — which some are predicting, based on the serious chart success the Aussie recording artist has had this year — expect a similar outcry. That said, she would be the first female solo artist to win since Lauryn Hill, as part of the Fugees back in 1997.

9. Speaking of which: why is Iggy Azalea so polarizing?
Iggy Azalea has long been accused of appropriating and colonizing black culture, and has come under fire from other artists including Snoop Dogg and Azealia Banks. Read Brittney Cooper’s great take on Iggy’s post-racial mess here.

10. These categories are super confusing. What’s the different between best song and best record?
Best song honors the songwriter while best record goes to the artist. But yeah, the Grammy categories are notoriously obtuse — for example, what sets an alternative music album apart from a rock album? Why is Jack White’s latest album considered alternative, while last time it was considered rock? We may never know.

11. Who’s the dark horse in this race?
We’re pulling for Brandy Clark. The Nashville songwriter is one of Music Row’s best, and she just won a Country Music Association Award for co-writing Kacey Musgraves’ “Follow Your Arrow,” but don’t think of her as just another product of Nashville’s big hype machine. Clark is up against heavyweights like Miranda Lambert’s “Platinum” (which she has a songwriting credit on, of course) in the Best Country Album category for her debut “12 Stories.” It’s the real deal, which is why we hope she won’t win Best New Artist (see #2).

12. What are the big performances to look forward to?
In addition to Common, John Legend and Beyonce, there’s another highly-anticipated trifecta taking the stage, as Rihanna, Kanye West and Paul McCartney will perform their new country-flavored track "FourFiveSeconds." Kanye is also coming back for a solo performance, debuting a brand new song from his upcoming album, while Lady Gaga and Tony Bennett — who released an album of duets last year — can be counted on to bring some old-school vocal firepower.

13. What’s Madonna going to do?
Who knows! In 1999 she dressed up like a geisha and last year she presided over 33 marriages, so we’re sure the inveterately controversial artist be up to something when she performs a track off her ill-fated new album "Rebel Heart."

14. Um, I’m sorry, but this was The Year of Taylor Swift. Shouldn’t there be more Taylor Swift?
Due to the weird eligibility requirements, “1989” isn’t eligible for nomination this year, much like "Beyonce" last year. Swift did get three nominations for her single, "Shake it Off," but waiters gotta wait, wait, wait: It will likely be 2016 when T-Swift really cleans up.

15. Is Missy Elliott coming?
Probably not, but we really, really hope so. Left shark is also invited.