Ronald Reagan's wartime lies: The president had quite a Brian Williams problem

Reagan spent WW II in Hollywood. He told the Israeli prime minister he was at the liberation of Nazi death camps 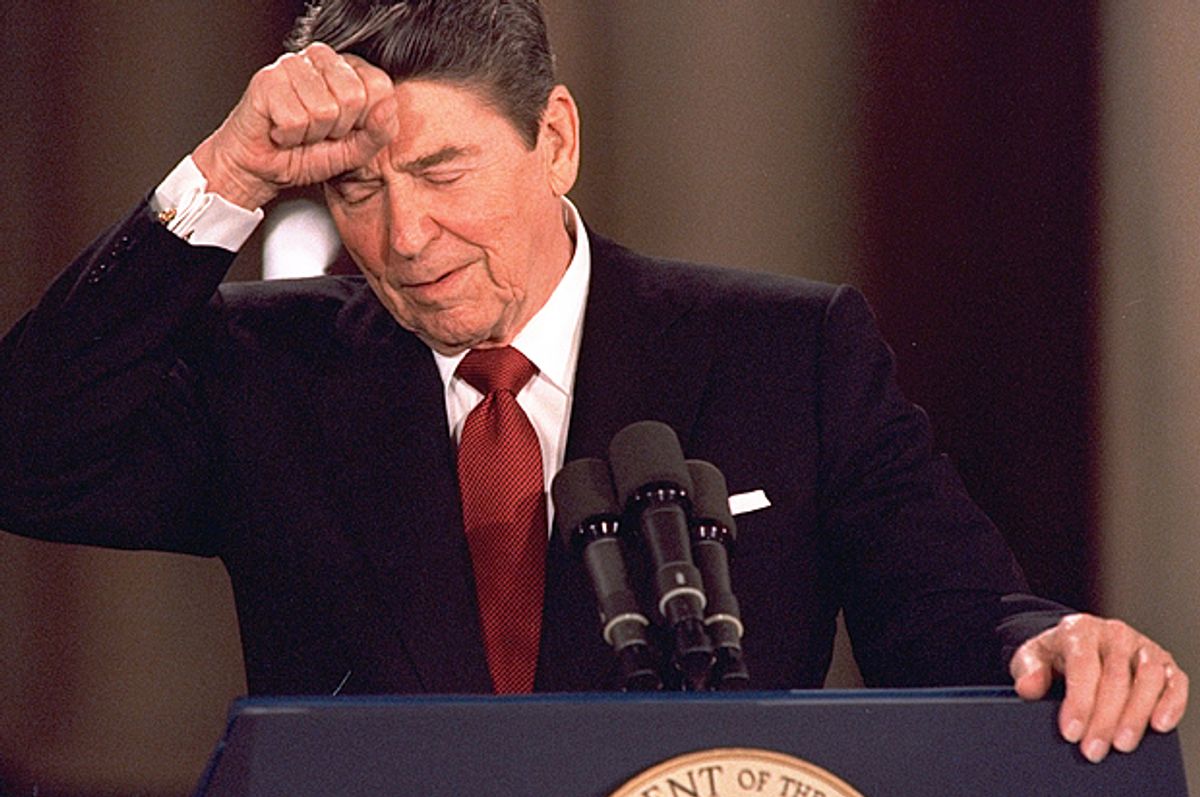 When it emerged that NBC News anchor Brian Williams had misled the public for years with a harrowing account of coming under enemy fire on a military helicopter during the 2003 invasion of Iraq, observers were quick to draw comparisons with other public figures caught telling tall tales about combat experiences. Some hearkened back to Hillary Clinton's bogus 2008 assertion that she had landed "under sniper fire" during a trip to Bosnia a dozen years earlier; in reality, video from the trip showed a smiling Clinton and her daughter walking calmly on the tarmac, with no sign of trouble whatsoever.

There's another figure who merits mention in this discussion, one whose serial blurring of lines between fiction and reality was a mainstay of his public career. That figure, of course, was Ronald Reagan.

Reagan's fibs were manifold. They included his campaign-trail tale of a "Chicago welfare queen" with 80 aliases, 30 addresses, and 12 Social Security cards, whom he alleged had claimed "over $150,000" in government benefits. The woman whom Reagan made infamous was convicted of using only two aliases, used to collect $8,000.

Once in office, Reagan's deception in the Iran-Contra scandal briefly threatened his presidency. First, Reagan flatly denied wrongdoing, publicly declaring, "We did not -- repeat, did not -- trade weapons or anything else for hostages, nor will we." Months later, when subsequent revelations rendered that assertion untenable, Reagan delivered an Oval Office address in which he tried to reconcile his public claims with the factual record. "A few months ago, I told the American people I did not trade arms for hostages," Reagan said. "My heart and my best intentions still tell me that's true, but the facts and the evidence tell me it is not."

But Reagan's fabrications also included whoppers about conflict zones reminiscent of those put forth by Williams and Clinton. During Israeli Prime Minister Yitzhak Shamir's November 1983 visit to the U.S., Reagan told Shamir that during his service in the U.S. Army film corps, he and fellow members of his unit personally shot footage of the Nazis' concentration camps as they were liberated. Reagan would tell this story again to others, including Holocaust survivor Simon Wiesenthal. But Reagan was never present at the camps' liberation. Instead, he spent the war in Culver City, California, where he processed footage from the liberation of the camps.

Reagan biographer Edmund Morris proposed an especially charitable explanation for Reagan's misleading Holocaust claim, arguing that the images "so burned into his brain that later in life -- quite understandably -- he imagined he had been there at Ohrdruf and Buchenwald." Like Williams' mea culpa, in which he stated that he mistakenly "conflate[d]" one helicopter with another, Morris' explanation stretches credulity. Just as it's exceedingly difficult to see how someone could misremember such a searing episode as being fired upon in a war zone, it's hard to believe that one could confuse viewing footage of Nazi death camps with actually being present at them.

Not only did Reagan offer misleading accounts of his own experiences during the war; he also made embarrassing flubs about others' experiences. In his 1981 inaugural address, Reagan told the gripping story of a World War I soldier, Martin Treptow, whom he inaccurately implied was buried in nearby Arlington National Cemetery. Two years later, Reagan found himself in hot water after New York Daily News scribe Lars-Erik Nelson looked into an account of heroism Reagan related during a Congressional Medal of Honor ceremony and discovered that there was no evidence the event ever occurred.

In the story, which J. David Woodard describes in his book "The America that Reagan Built," a B-17 bomber came under fire in the course of a European bombing raid in World War II. With the plane rapidly losing altitude, the B-17 commander ordered his soldiers to evacuate the bomber. When all but one young soldier had left the bomber, the commander gripped the remaining soldier's hand and said, "Never mind, son, we'll ride it down together."

Nelson examined all 434 Medal of Honor cases and could not find any citation of the event Reagan described. But one reader told Nelson that the story bore similarities to a scene from the World War II-era film "A Wing and a Prayer," while another claimed to have read it in the Reader's Digest. White House Press Secretary Larry Speakes had his own response.

“If you tell the same story five times, it’s true," he said.