From fake news to politics -- is there any way Jon Stewart will run for office?

Stewart has a host of exciting options as he makes his exit. The future is less clear for the "real" newsman 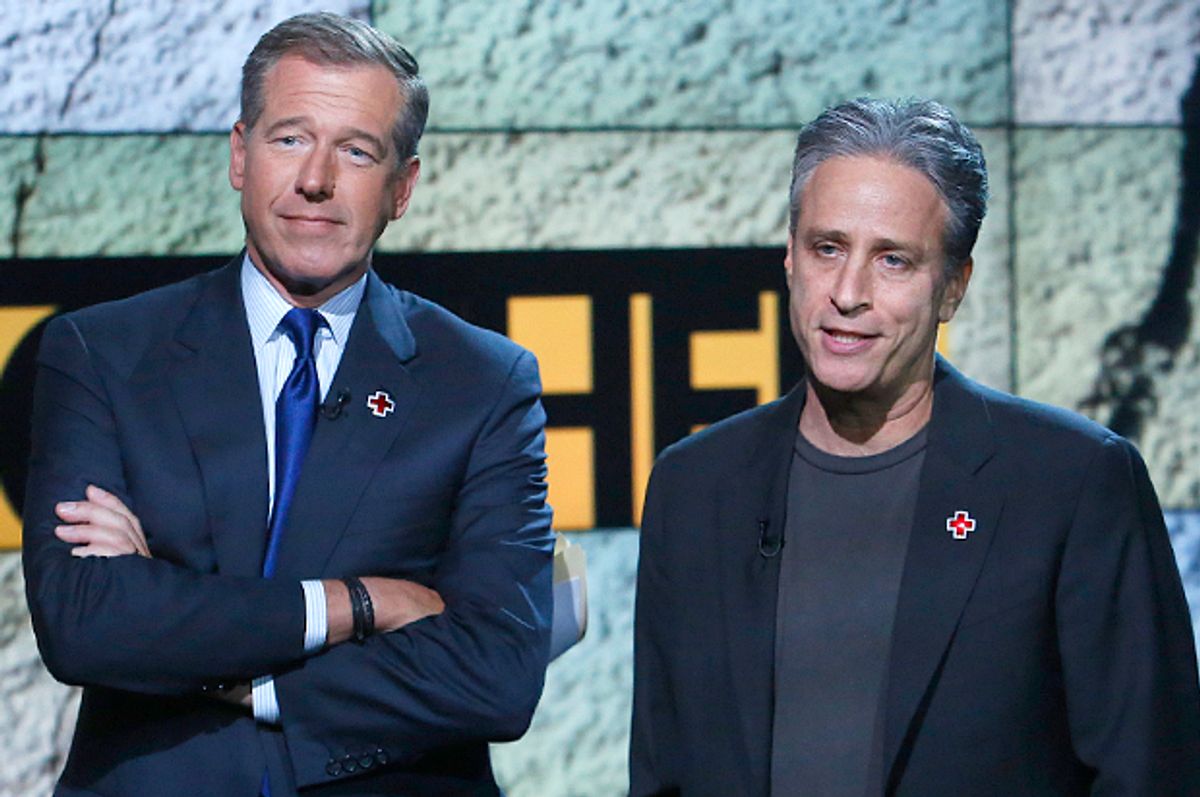 As two highly visible and influential news personalities ride off into the sunset this week — one voluntarily, the other assigned to a lengthy hiatus for playing a little too fast and loose with the facts — it’s important to examine the influence that Jon Stewart has had on the TV news industry as a whole.

In fact, in the wake of his announcement that he’ll be leaving "The Daily Show," perhaps it could be said that Stewart – TV’s first entirely fake newsman – was partially responsible for Brian Williams’ journalistic slip-ups, and not Twitter or a spotty memory. After all, when Stewart first took the reins of "The Daily Show" back during cable television’s fledgling Dark Ages in 1999, the little-watched cable show mostly consisted of frat-boy humor and mean-spirited pranks. News programs – from the tiniest local newscasts to the mega-corporate network broadcasts – largely played it safe, kowtowing to older viewers and conservative advertisers.

Stewart shook things up from the beginning. First off, he did away with the tawdry sketches from his predecessor Craig Kilborn’s era. Stephen Colbert, who started on the show in 1997, found a kindred spirit in Stewart’s arrival. “You wanted to take your soul off, put it on a wire hanger, and leave it in the closet before you got on the plane to do one of these pieces,” Colbert remarked about the Kilborn days in 2003.

Stewart wanted to make a show where he could help make a difference by covering topics that people actually cared about. He wanted to make them laugh while updating them on the major news stories of the day. As executive producer and host, Stewart never lost sight of the fact that the main reason people tuned in was to be entertained. After all, late-night viewers were either tired, stoned – or both – and wanted their news to go down in easily digestible nuggets, unlike the early-evening news audience who skewed older and most likely cut their teeth on Cronkite and Huntley and Brinkley. (To which younger readers will ask, “Who?”)

Stewart’s formula worked. "The Daily Show" quickly attracted a younger demographic who rarely watched network news and came to consider it their primary source of news. In fact, a 2004 survey from the Pew Research Center revealed that fully one-fifth of Americans aged 18 to 29 said they relied on two non-news shows for their main source of information about the presidential election: one was "The Daily Show." The other? "Saturday Night Live."

Stewart was the first to successfully blur the lines between news and entertainment, and as viewers and advertisers flocked to the show, traditional news programs took note and started to borrow from his playbook. Network and small-town correspondents and anchors alike might not necessarily crack a joke on air, but they might embellish the facts a bit and sneak in a snippet about what that body looked like as it floated by in the raging floodwaters after a hurricane.

It’s unclear if Williams felt increasing pressure to glam up his broadcasts – either internally or from higher-ups – but one thing’s for sure: In a 2010 interview with New York magazine. He didn’t hide his admiration for Stewart’s soapbox.

“He has chronicled the death of shame in politics and journalism, and many of us on this side of the journalism tracks often wish we were on Jon’s side,” said Williams. “I envy his platform to shout from the mountaintop.”

While pundits debate Williams’ future after his fall from grace, Stewart has a tantalizing host of options to consider, including making more movies. Though he won more raspberries than accolades for his pre-"Daily Show" acting career, his directorial debut, "Rosewater," was highly regarded by critics, and undoubtedly more than one Hollywood studio is already dangling production deals before him.

Many believe that Stewart’s natural next step would be to enter politics. But his distaste for holding political office is clear, in part because he doesn’t like to take work home from the office. “I make a lot of money writing jokes,” he told Larry King in 2004. “I get to go home and nobody bothers me. I don’t have to get people to vote on things.”

Once Stewart exits stage left, bequeathing his seat behind the desk to someone else – or not, since in the past he’s hinted that he may just pull the plug on the whole kit-and-kaboodle – will that reduce pressure on news organizations everywhere to pull back just a bit on the sensationalism?

As any good Jersey boy would say, Nawwwwww, ain’t gonna happen. That cat is long out of the bag.

For Brian Williams, his high regard for Stewart’s enviable platform may have led the NBC news anchor into a quandary that is impossible to escape. But for better or worse, over his lengthy tenure Jon Stewart has totally reshaped the landscape for both comedy programs and broadcast news shows: the erstwhile stand-up comedian started out as an entertainer but ended up becoming a pseudo-newscaster, while today, newscasters are required to do little more than entertain in many cases.

Lisa Rogak is the author of "Angry Optimist: The Life and Times of Jon Stewart," a New York Times bestseller.