There is no examination given to Chris Kyle's cause. We are instead supposed to worship his heroism, uncritically 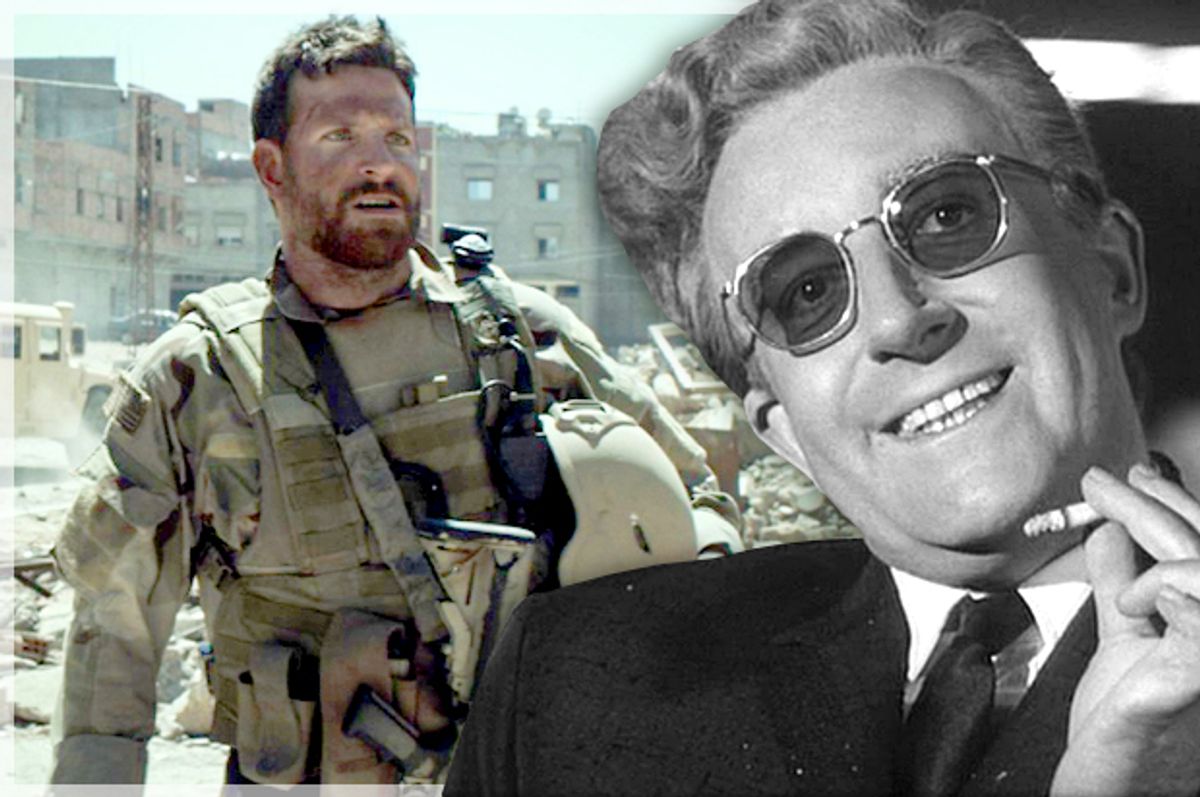 Bradley Cooper in "American Sniper," Peter Sellers in "Dr. Strangelove or: How I Learned to Stop Worrying and Love the Bomb"
--

War has been a popular theme for literature, poetry, music, theater and film since the earliest days of the mediums. Over such a long history, it’s been treated just about every way, from levity to grim reverence. Whatever else may be said about "American Sniper," it definitely falls into the second category.

Clint Eastwood’s controversial film adapting the autobiography of Navy SEAL Chris Kyle, the deadliest sniper in U.S. history, wants you to appreciate its subject’s battlefield preeminence and the tragedy that befalls a hero who gives his life for a cause. There’s hardly any examination given to that cause; you’re just supposed to be in awe of the man’s heroism.

In one of the best essays yet written about the film, author and activist Chris Hedges reminds us that this kind of sentimentality is always to be distrusted. But the response to the movie has been heatedly mixed, to say the least. Conservatives praise the film for finally portraying the American military and the values of good, God-fearing soldiers positively.

Perhaps to conservatives, Hollywood is a little short on movies about white supermen stamping out brown evil, but its films almost always reflect favorably on U.S. military might. This has become even more noticeable in the last few decades. Some of the biggest war movies from the '90s on have been "Gettysburg," "Saving Private Ryan," "The Patriot," "The Hurt Locker" and "Zero Dark Thirty." Though telling different stories about different wars, none of these can really be considered antiwar. Contrast this with some of the most popular depictions of war from a generation or two ago, like "M*A*S*H," "Dr. Strangelove," "Slaughterhouse-Five" and even "Apocalypse Now" – critical takes that highlight the absurdity of conflict. With few exceptions, Hollywood seems to have abandoned war satire entirely and shifted in lockstep toward solemn appreciation. Eastwood’s film just might be the capstone of this trend.

One of the most influential satirical depictions of war is Joseph Heller’s "Catch-22." Heller was an actual bombardier during World War II, and his experiences informed much of the story. But Heller’s hero, Yossarian, is no Chris Kyle, and the military he serves in is not noble. Of all the men he’s platooned with, none are as determined to survive the war as he. His cowardice is courageous – Yossarian is willing to risk his reputation, his career, even his standing as a free man if it keeps him alive. The Axis Powers are his enemies. The Allies are his enemies. “The enemy is anybody who's going to get you killed, no matter which side he is on,” Yossarian insists.

Creators of all stripes used to ridicule and diminish the military-industrial complex in this way, and much of this satire came from actual veterans. Richard Hooker, author of the novel-turned-film-turned-massive-TV-show "M*A*S*H," based his work on real-life experiences in Korea. Kurt Vonnegut wrote the biting satire "Slaughterhouse-Five" based on his experience as a POW in Dresden during the Allied firebombing.

Now, a big part of our conversation about war has been taken over by cheerleaders who’ve never seen combat and lack the perspective of veterans like Heller and Vonnegut. Maybe you have to live war to fully understand its horrors, but perhaps you also have to live war to understand its absurdity. "American Sniper’s" characters have moments of doubt and reflection, but even as Chris Kyle executes a mother and her young son, the audience is never seriously invited to consider that the U.S. military might be in the wrong.

Part of this is certainly due to the changing makeup of the military. The end of the draft turned soldiers into a professional, specialized class. Now that they’re no longer conscripted, fewer artists are having military experiences to share with us critically. Volunteers likely subscribe to the military’s values before they even sign up and are more receptive to indoctrination, which assures recruits they are the best, brightest, bravest, strongest, noblest people in the world and that their enemy is subhuman scum. Law enforcement goes through a similar on-boarding process. Actually, anyone who’s gone through corporate orientation has likely been told he or she is working with the smartest people at the best company in the whole world. People who buy into that kind of bullshit aren’t likely to think much of a guy like Yossarian. Professionals would rather have that indoctrination reinforced than challenged, and Eastwood definitely caters to the most devout of military admirers.

Comedic takes on war, like "McHale’s Navy," "Slaughterhouse-Five" and "Catch-22," often take place during World War II – a war most people regard as a “good war,” waged for the right reasons. The motivations in Iraq and the war on terror are far more spurious. This helps explain the need for depictions like "American Sniper" that are valorous and forgiving of American crimes. As Hitler said, “In the big lie there is always a certain force of credibility, because the broad masses of a nation … would not believe that others could have the impudence to distort the truth so infamously.” Rather than shatter the pretense, films about wars based on lies must be more passionately defended, more unapologetic, than any others. Chris Kyle, who described all Iraqis as "savages" and only regrets that he didn't kill more of them, is the perfect protagonist for such a picture.

Writing at Forbes, Erik Kain argues there is plenty of nuance in "American Sniper": “For all the time it spends making Kyle an admirable and heroic figure, it also shows his flaws – stubbornness, a lack of thoughtfulness about the war … and outbursts of anger and paranoia.” Apparently, admitting that Kyle could be a bit of a lunkhead is enough for Eastwood to achieve balance. Others argue that the movie’s depiction of the broken home lives of soldiers actually makes it antiwar. Exploring post-traumatic stress disorder is certainly worthwhile, but countless numbers of our victims suffer with present traumatic stress – at least 500,000 and probably more Iraqis were killed by our invasion, compared to 4,500 Americans. Their country is completely devastated. Given this context, it’s remarkably cynical to qualify a film as antiwar because it portrays the side that did the overwhelming majority of the killing as having some problems adjusting.

Its fiercest critics call "American Sniper" an explicit pro-war propaganda film, but even if it isn’t that it achieves the same goal as any such film might. The controversy surrounding it is encouraging. Better our culture should take its cues from characters like Yossarian who abhor war, violence and conflict than those who appear gung-ho for war and wish to spotlight only the valor and bravery of the battlefield. Fortunately, we aren't all so forgetful or clueless about war and its consequences, and Eastwood’s film is receiving the flak that it’s due.