Eddie Murphy, Wayne and Garth, Paul "Still Crazy" Simon: Here are our hopes and dreams for the SNL reunion 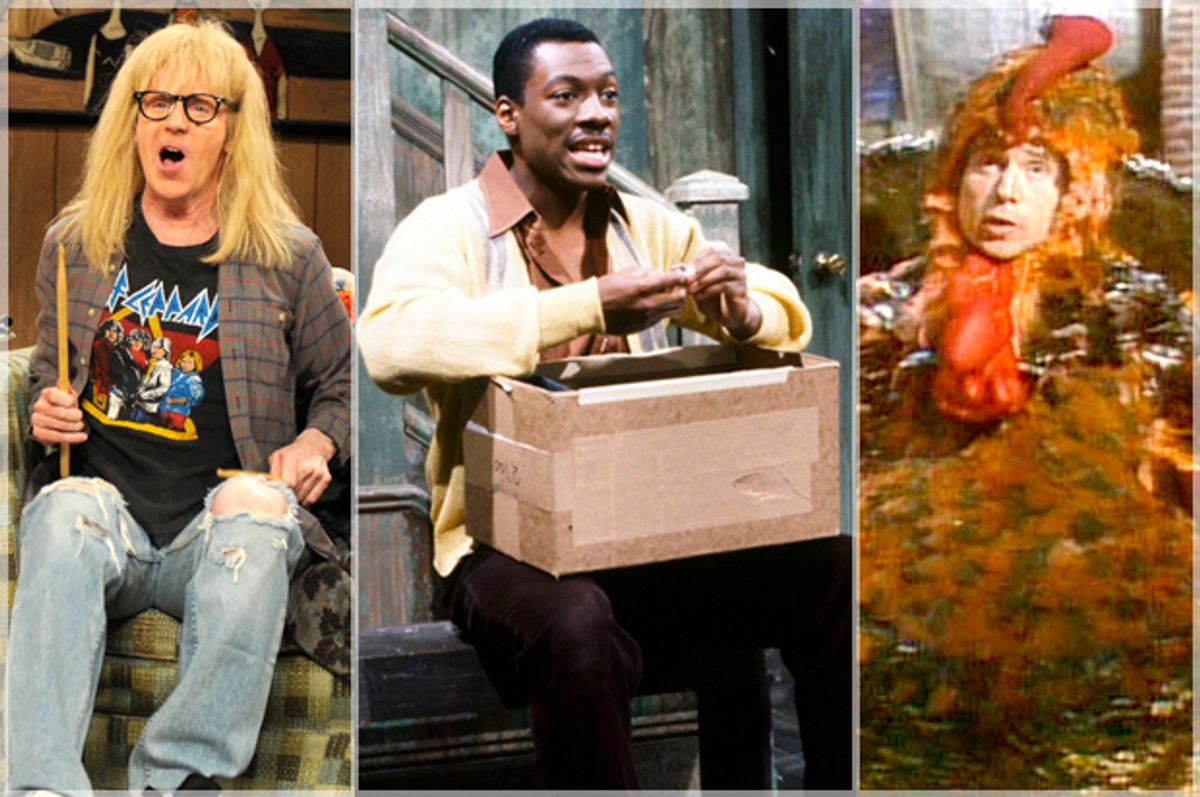 "Saturday Night Live" celebrates its 40th anniversary with a live reunion show airing Sunday night at 8 p.m. Judging by the extensive list of former hosts and cast-members who will be returning to Studio 8H to fete the venerated comedic institution, it’s going to be quite a blowout; after adding several more guests last night, the show has expanded to three-and-a-half hours. Here are some of the things we're looking forward to -- as well as a handful of our wildest hopes and dreams -- for the epic SNL birthday bash.

The return of Eddie Murphy
Murphy is one of the shining stars to come out of "SNL"’s 40-year reign, and perhaps the only reason the show survived its dark, Lorne-less period from 1980-1984. Yet the comedic legend's relationship with the show grew strained after his departure, and he hasn't graced the halls of Studio 8H in more than 31 years. The fact that Murphy even agreed to participate is a historic occasion in its own right -- the return of beloved characters like Mr. Robinson would just be icing on the cake. (Now that Joe Piscopo has been confirmed, too, could we see the return of their spot-on Frank Sinatra-Stevie Wonder duet?)

Paul Simon performing in a ridiculous costume
Simon's "SNL" appearances never disappoint, and while it may be the wrong season to perform in a turkey costume, we're sure there are some seasonally appropriate alternatives — an Abe Lincoln costume? A quality mattress on deep discount?

A Not Ready for Prime Time Players reunion
Dan Aykroyd, Chevy Chase, Garrett Morris, Jane Curtin and Laraine Newman, who were all part of the original 1975 cast, and Bill Murray, who joined a year later, brought some of comedy's most lasting and influential characters to life. Expect some serious nostalgia with their return — hopefully a reprise of some of their old fond banter (see below), and presumably a tribute to their beloved compatriots John Belushi and Gilda Radner, who left us far to soon.

Speaking of tributes:
"SNL" has lost so many greats over the years, from Phil Hartman and Chris Farley to Jan Hooks just last fall. With so many of their peers returning, we hope to see comedy's fallen soldiers be saluted in style.

A Five Timer's Club sketch
A number of members of the illustrious Five Timer's club, including Alec Baldwin, Steve Martin, Christopher Walken, Bill Murray, Paul Simon and Tom Hanks, will be back (not to mention the Club's humble waitstaff Martin Short and Dan Aykroyd), so fingers crossed for a Five Timer's sketch that even comes close to living up to the last one, on the occasion of J.T.'s induction back in 2013. Don't forget, it's pronounced hors d'oeuvres.

Wayne’s World
Both Mike Myers and Dana Carvey are scheduled to attend, so the move seems clear here (they did do a "Wayne's World" reprise at the 2008 MTV movie awards, so we're putting this one in the "very likely" column).

Adam Sandler on guitar
Adam Sandler is returning for the first time since his firing in 1995, and we hope he brought his guitar. With the festivities bookended by Valentine's Day and President's Day (the sexiest holiday of the calendar year!), he certainly has some material to work with.

Garrett Morris and Paul Rudd face off on who is the better Ant-Man
To be fair, Garrett was first.

The Fey, Poehler, Rudolph trifecta
Much like now, the early 2000s was home to a specially talented crop of "SNL" women: Tina Fey, Amy Poehler, Maya Rudolph, and Rachel Dratch (Kristen Wiig joined later). We’ve seen the women together off-sceen plenty in recent years, but it will be fun to have the whole gang back together at 8H (poor Rachel Dratch, seemingly, was not invited).

Kanye and McCartney
John Lennon and Paul McCartney never got a chance to perform on "SNL" together, but will Kanye West succeed where his, erm, predecessor Lennon never did? Will Dana Carvey do his impression of McCartney explaining Kanye to the ghost of John Lennon? Will Taylor Swift join them? (And has everyone remembered to take their Swiftamine? We're going to need it).

A "Ghostbusters" teaser/reunion
Melissa McCarthy and Kristen Wiig are both returning; is it too much to ask that they give the people what they want and team up with current castmembers Leslie Jones and Kate McKinnon for a little "Ghostbusters" teaser? Hey, maybe Murray and Aykroyd will swing by as well to give them some tips on wielding those proton packs? Oh god, please let this happen (this will not happen).

Norm MacDonald unfiltered
Norm hasn’t been back to "SNL" that much since he was fired from his spot at the Update desk in 1997, and you can always count on him to inject some mischief into the proceedings. When he came back to host the show in 1999, he famously expressed his annoyance over having been fired and commented that the show had gotten really bad since he left (since then he has made only one "SNL" appearance — doing his show-stealing Burt Reynolds impression in "Celebrity Jeopardy"). While some aren’t fans of Norm's particularly merciless brand of humor, others view him as arguably the best Update host in history, and we for one can't wait to see him get back into the ring, gloves on.

Celebrity Jeopardy
Speaking of which, Will Ferrell will be back, so it's only logical that he reprise his role as Alex Trebek for the show's legendary recurring "Celebrity Jeopardy" sketch. Throw in Norm as Burt Reynolds, Jimmy Fallon as whoever, and Darrell Hammond (who's announcer now, so we assume he’ll be there) as Trebek's iconic antagonist Sean Connery, and we can all go to bed happy.