Behold the food of the future: Why one student is challenging America to start eating bugs 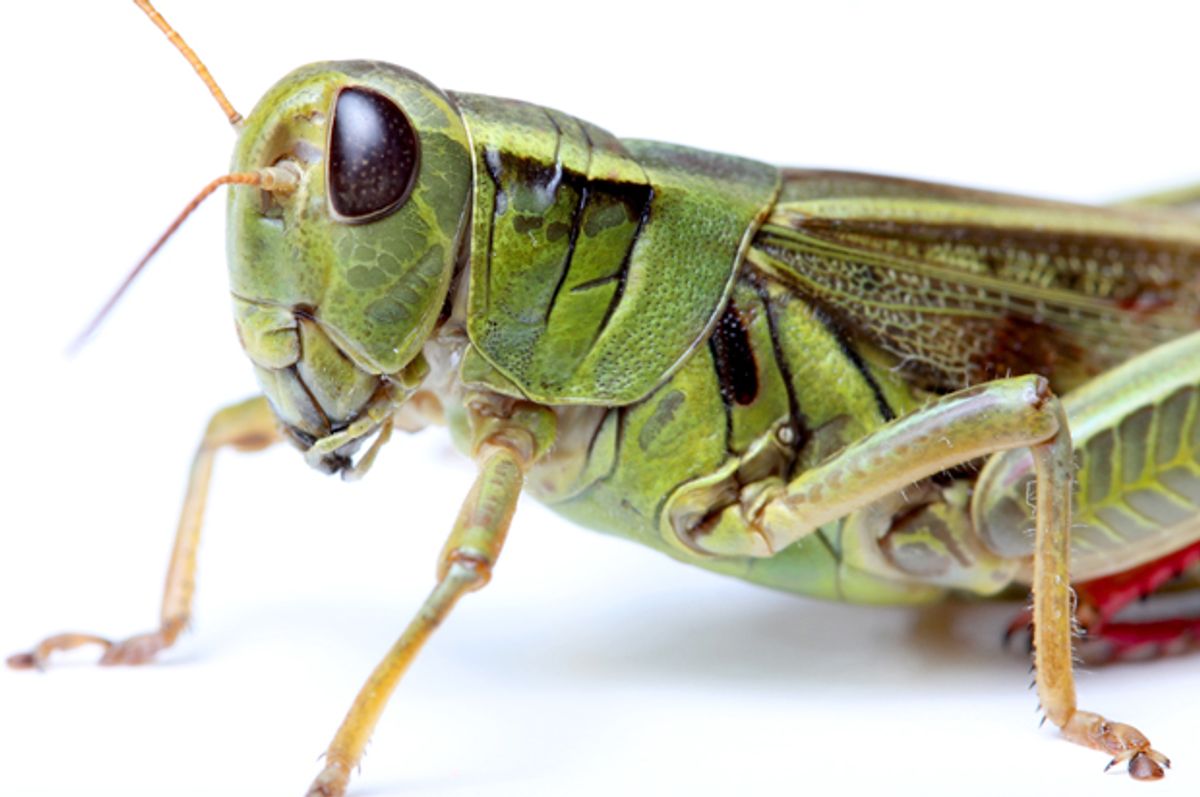 As the global population hurtles toward 8 billion, experts foresee a major agricultural crisis. How can we sustainably feed a planet where resources are already scarce? Many believe the answer lies in entomophagy — the incorporation of insects into one's diet.

Before you shake your head in disgust, consider this: Insects need significantly less feed and water than typical farm animals (e.g., cows, chickens and pigs) and contain comparable levels of protein, vitamins and amino acids. Also, there are a ton of insects, many orders of magnitude more than farm animals. Whether or not you relish the idea of chomping down on a grasshopper, the math involved is undeniable.

That's why Cam Brantley-Rios, a senior at Auburn University, recently decided to eat a serving of bugs with every single meal over a period of 30 days, then document the process on his website. Salon spoke with him about the most disgusting thing he has eaten, his fear of cockroaches, and how bugs can save the world.

What prompted you to undertake this 30-day challenge?

Originally I wanted to make a website where I could post different stories about entomophagy and small businesses that are starting up in the U.S., but I wasn’t really sure how many people were going to read it or if people would even be interested in it. So this was a great way to grab the attention of my family and friends who don’t really know about it or the benefits of eating bugs.

I think people love when someone agrees to do something scary for a long time. How far along are you in it?

[Editor's note: This interview was conducted on Feb. 12. At the time of publication, Cam is now on the 18th day of his bug-eating challenge.]

So how is it going?

It’s going pretty well, and it’s going by faster than I thought. I was actually just talking to my roommate about it. It doesn’t feel like it’s been 14 days. I feel like day 30 might sneak up on me. But it’s been good.

I haven’t told any reporters this, actually, but originally it was just supposed to be 30 days of dinner, because my schedule is crazy and I didn’t want to stress myself out or anything. And then my friend Coleman really pushed me to make it a bit more challenging, a little bit more compelling, and it really is a better story this way.

That’s been easier than I thought, too. Breakfast this morning I just made mealworms and coconut oil and brown sugar and just tossed them into my oatmeal. They don’t take too long to cook. It isn’t as hard as I thought it would be. It’s going swimmingly as of now, but I don’t know, I had a pretty weird dinner last night and I’m probably going to have some cockroaches next week, so we’ll see.

What was dinner last night?

It was silkworm pupae, which is pretty much just a silkworm undergoing metamorphosis before it becomes a moth. You boil them. They have a very strong smell.

What's the best thing you’ve eaten in this challenge and what's the worst thing?

The silkworm pupae was definitely the worst thing I’ve had. The best thing I’ve had — I do like the crickets. That’s a trend. I wouldn’t say I have one favorite meal yet; maybe after this whole 30 days is over. I’ll have a bigger pool to choose from. But so far I like crickets and I use them with a lot of Mexican dishes.

People say different things. Some people think they taste good and some people really don’t like the taste at all, but to me they have a seafood-y taste. Sort of like shrimp, a little more earthy. It’s not as strong as the silkworm pupae, for sure. If you eat them the right way, they taste fine. You can kind of taste their flavor but you just pick up on the spices that you season them with, too. So I like to use chili powder.

What are you eating next week?

I guess I can believe that. So what are the rules of your 30 days? The precise rules. Do you just have to put bugs in something every meal?

Yeah, in some way, in some form. Whether it’s in powder, or usually it’s whole bugs, at least three times a day. Sometimes it’s more, but I don’t really talk about the protein bars that I snack on throughout the day or my little baggies of roasted worms that I eat with friends. I don’t count those. But the main three meals are the ones that I’m documenting.

So why bugs? Why is this your new cause?

I’m all about good health, I’m all about going out of my comfort zone. This is both of those things at once. I’m still eating meat, but most of my meat so far has been bugs, which are just a healthier protein, and just as much protein, and rich in vitamins and minerals. It’s just a healthy choice. It’s a weird choice, for sure, but it’s a healthy one. So that’s motivation for me and that was a big reason for me to eat bugs. They’re so accessible, too. You can just order them and they get here within a few days. I really want to support the businesses that are trying to introduce it to Western cultures like America. So this is a great way to get their names out there, too.

I’ve inspired at least one friend, that I know of, to buy cricket protein bars. I’m just hoping that by the end of this people will at least know about these companies and maybe they’ll be like, “Maybe I should try it.” Even if it’s not in the next month, maybe it’s a year down the road. But I’m hoping that they’ll remember me doing this challenge. And if they’re in Mexico and they’re in the market and they see chapulines, which are Mexican grasshoppers, maybe they’ll be a little bit more inclined to eat one.