The Montana Legislature is now controlled by some far-right loons. You won't believe what they're trying to pass 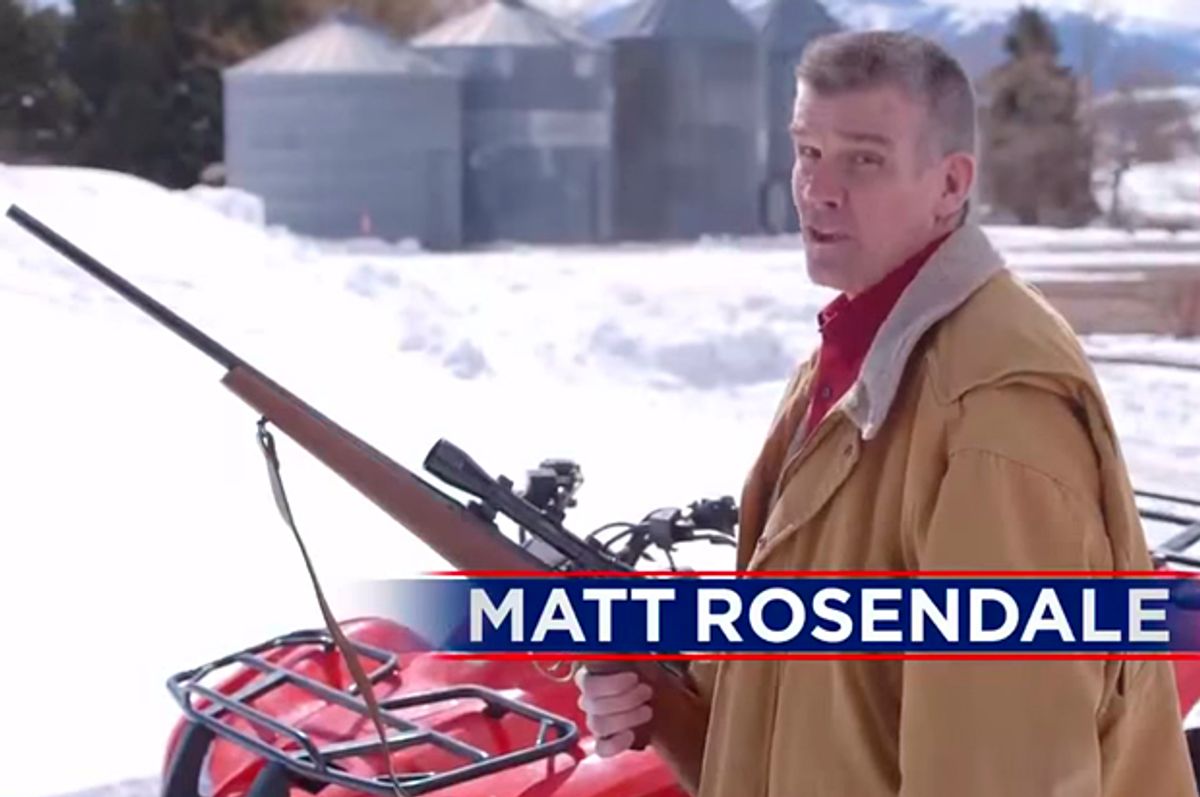 Here are the 10 most bizarre Tea Party bills currently being debated in the Montana Legislature, which is now controlled by the right wing of the Republican Party.  Some of these bills, believe it or not, have a chance of making it to the governor’s desk.

1) Prepare for National Ammunition shortage (SB 122).  When Obama comes to get our guns and bullets, Montana will be ready.  This bill cites the “serious risk” that America might run out of ammunition and exempts Montana’s ammo manufacturers from paying any taxes at all, as an incentive to produce more bullets so we can survive the Obama gun rapture. Its author, Matt Rosendale, was an unsuccessful congressional candidate in 2014 whose campaign ads featured him shooting drones out of the air with a rifle.

2) Establish Armed Militias in Every Town (SB 130). Even if we have enough bullets, Montana could still be in grave danger from the federal government.  This bill would protect citizens by creating local paramilitary groups across the state, known as “home guards,” and would allow sheriffs to mobilize these troops for whatever reason they so choose, without the governor’s consent.  This concept is supported enthusiastically by militia groups whose members enjoy stockpiling firearms but sometimes go to prison.

3) Require that nipples and areolae be fully concealed; prohibit “simulated genitalia”  (HB 365).  Our state already has a general law against indecent exposure but Montana’s social conservatives feel it isn’t enough.  The new proposal lists body parts.  Specifically, it would prohibit “exposing the anus, areola or nipple with anything less than a fully opaque covering.”  Better yet, it would forbid the wearing of “any costume or covering that gives the appearance of, or simulates, the genitals, nipple or areola.”  So much for my Halloween idea.

4) Montana Legislative Dress Code.  A young conservative ascended to speaker of the House this year, and his first order of business was to propose a new dress code that advised women “to be mindful of necklines and skirt lengths” and also to wear only “dress blouses or suit-like dresses,” and never “jersey or fleece material” or leggings.  Areolae and nipples were not mentioned.

5) “Encourage Critical Thinking in the Classroom” is the title of HB 321.  The preamble of this legislation says, “The scientific community has not resolved or answered the questions related to the origins of all life or the origin of our universe.”  It would give public school teachers legal immunity if they want to teach “alternative” theories.

6) Allow Concealed Weapons in Bars, Banks, and on Campuses (HB 371, SB 143).  There are a few places where Montana has always forbidden citizens from carrying weapons, including financial institutions, places where booze is served and college campuses.  The Tea Party feels Montana would be a safer place if we rescind these rules.  One point where they yielded, however: Bars on campuses will still be allowed to have a no weapons policy.  So students wanting to stand their ground will have to go off campus.

7) Ban “Foreign or Religious Law” From American Courts (SB 199).  The purpose of this law is to prevent Muslims from using Shariah law to co-opt our legal institutions.  This is a serious threat in Montana where the Muslim population is probably .001 percent.

8) Return All Federal Lands to State Ownership (LC 1758 et al).  This concept comes out of a growing national movement (think Cliven Bundy) whose members do not recognize the right of the U.S. government to own large pieces of land such as national parks and forests.   The bill effectively proclaims that these lands belong to Montana, rather than America, and demands that the U.S. government return them.  The Montana Republican Party platform also calls for this.

9) Nullify All Federal Gun Laws (HB 203). This bill declares that Montana may selectively recognize or ignore federal firearms laws, such as a ban on machine guns.  Better yet, it makes it a crime for a policeman to even try to enforce such laws.  The bill’s author, Montana’s Tea Party leader Art Wittich, has been known to enjoy nullifying laws himself.  He will soon be on trial for having ignored Montana’s campaign donations laws.

10) Allow Hunting With Silencers (HB 250).  The people behind this idea think that big game hunting is too difficult under current rules, because if you take a shot and miss, the animal hears the gunfire and runs.  Then you have to pursue him (or her), which could take a whole day.  That’s called “fair chase” but many Tea Party types believe this burdens their freedom. They think the Second Amendment guarantees them a Second Shot.