Doomed by the South: Why the emerging Democratic majority may never happen

For years we've heard that Democrats will rise on a coalition of white liberals and non-whites. Here's the reality 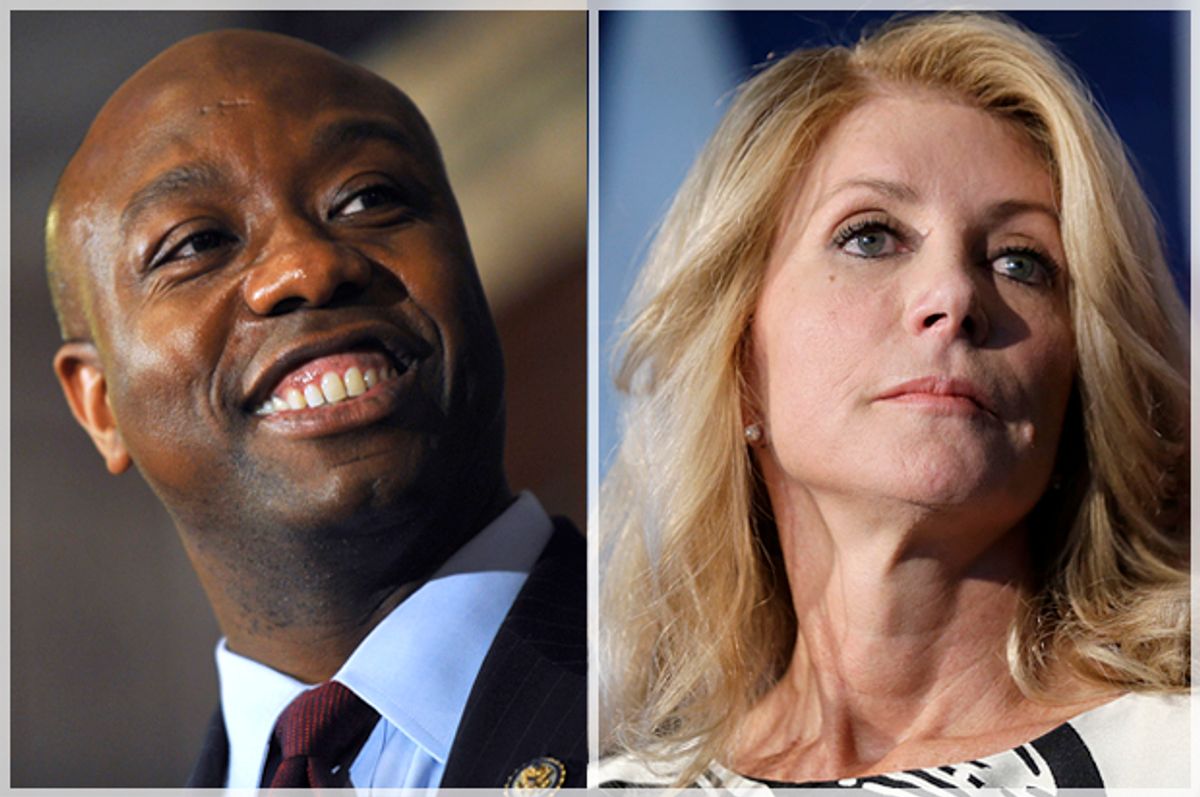 “The Emerging Republican Advantage,” an essay by the journalist and historian John Judis in National Journal, has ignited a national controversy.  In part this has to do with the fact that in 2002 Judis co-authored, with Ruy Teixeira, "The Emerging Democratic Majority," an empirically rich and well-reasoned study that convinced many progressives that it was only a matter of time until the numerical growth of a coalition of white professionals, African-Americans and Latinos produced a permanent or at least long-term Democratic majority.  In reconsidering this thesis, Judis puts a lot of emphasis on the aversion to taxes and big government of middle-income Americans, a discontent that benefits the Republican Party.

Judis and Teixeira are brilliant analysts of politics, but I never believed in their emerging Democratic majority thesis.  The idea of the “coalition of the ascendant”  is based chiefly on the premise that Latino voters, the most rapidly growing share of the U.S. electorate, will continue to be Democratic partisans as their share of the population increases over time.  This assumes that Latinos, in their voting behavior, will be more like black voters, the most loyal Democratic constituency, than like European-American “white ethnics” such as Irish-Americans and Italian-Americans, who deserted New Deal liberalism for Reagan conservatism as they assimilated into mainstream society and moved up in income and out to the suburbs.  (A British saying had it: “Give an Irishman a horse and he’ll vote Tory”).

By the 1970s, a majority of American with non-English European ancestors had multiple ethnic ancestries, and most of them no longer spoke the language of this or that Old Country.  They were mainstream white Americans with a mix of, say, Polish, Irish, German and Italian grandparents.  They might rediscover their Irish ethnicity on St. Patrick’s Day and forget it again until next year.

Recently native-born Americans surpassed the foreign-born in the Latino community.  The rates of English adoption and out-marriage—mostly to non-Hispanic whites—among Latinos are similar to those of earlier generations of European immigrants.

One result of Latino assimilation may be the collapse of the very idea of a “nonwhite majority” except as a meaningless statistical category.  Already a majority of Latinos identify themselves as “white” when given the option on census forms.  As I argued in a 1996 New York Times Magazine essay, “The Beige and the Black,” because of the depth of anti-black racism in the U.S., America’s informal racial caste consciousness has always been binary—not whites vs. nonwhites, but blacks vs. non-blacks.  The “white” category has been an elastic one that has expanded to incorporate successive non-black immigrant groups—first European “ethnics” and in the future, perhaps, Latinos and Asian-Americans.

In the 21st century, then, the U.S. population is not likely to be crisply divided among whites, blacks, Hispanics, Asians and American Indians. Nor is it likely to be split two ways, between whites and nonwhites. Rather, we are most likely to see something more complicated: a white-Asian-Hispanic melting-pot majority -- a hard-to-differentiate group of beige Americans -- offset by a minority consisting of blacks who have been left out of the melting pot once again.

Jamelle Bouie has made a similar argument recently, in a 2014 essay for Democracy Journal titled “Demography Is Not Destiny”:

While there are limits to the comparison between the Latinos and Asian Americans of today with their Irish and Italian predecessors—Latinos and Asian Americans span a wide range of nationalities—the basic point stands. These are two upwardly mobile groups that are rapidly assimilating with the white mainstream. If the pattern of the past holds, the future won’t be majority-minority; it will be a white majority, where Spanish last names are common. And if that’s the case, there’s a chance that the GOP ends up getting a new crop of voters over the next two decades: Latinos and Asian Americans who have assimilated, become “white,” and thus more conservative in their political preferences.

What replaces Old World (or, in the case of Latino, other New World) ethnicities, as they become attenuated?  All American schoolchildren are taught that America is a “nation of immigrants with a melting-pot culture.”  But this is misleading.  Like Canada and Australia—and Argentina and Brazil—it’s a European settler nation, in which immigrants and their descendants assimilate to the language and political culture of the first settlers, while contributing mostly minor cuisine and folk traditions.  The single largest ancestry group in the U.S. is German, but the German contributions to American culture—Christmas trees, kindergartens and beer brands—are negligible, compared to those of the original British settlers.

What is more, immigrants do not assimilate to a generic American culture.  They assimilate to distinct American regional cultures, which to this day are shaped by the values of the original British-American settlers—reformist Puritans in New England, the populist Scots-Irish in Appalachia, the oligarchs of  the coastal South.

Even within the same denomination or religion—Protestant, Catholic or Jewish—Southerners are more conservative than Northerners.  In the 19th century, American Baptists and Methodists split into regional denominations over the issue of slavery.  Southern Jews have traditionally been more conservative than Northern Jews.  Bobby Jindal, an Indian-American from Louisiana, is a typical right-wing Louisiana politician.  Oh, and though you didn’t hear a lot about this from the progressives on MSNBC, in 2014 the first elected black senator from the South since the Civil War was Tim Scott, a conservative Republican.

Already we are seeing this pattern of regional cultural assimilation repeat itself with Latinos.  In the recent gubernatorial election in Texas, 44 percent of Latino voters—and 50 percent of male Latino voters—supported the Republican candidate, Greg Abbott, against the Democratic candidate, Wendy Davis.  To be sure, the Latinos who vote in Texas today tend to be more affluent and assimilated than Texan Latinos as a whole—but for that very reason they are better surrogates for future Latino voters than are recent immigrants are who not citizens or do not vote.

Regional culture also tends to be adopted by native-born American migrants from other parts of the country.  Partly this is self-selection.  According to the General Social Survey, transplants on the West Coast are more liberal than natives, and the same is true for transplanted Southerners and Southwesterners.  As Harry Enten and Nate Silver, interpreting the GSS data, note at FiveThirtyEight:

An 18-year-old from South Carolina might go to college in Boston if she has liberal political leanings or stay in South Carolina if she’s more conservative. The patterns can be self-reinforcing. If liberal residents are more likely to leave South Carolina, that means a higher percentage of the ones who remain are conservatives.

More bad news for Emerging Democratic Majoritarians:  the political journalist Sean Trende has estimated the impact of regional population shifts on House seats (and thus on the presidential electoral vote) in 2020 and 2040.  In both periods, the Northeast and Midwest lose congressional representation, while all of the states to pick up House seats are in the South or the West.  Texas is the big winner, gaining two seats after 2020 and seven seats after 2040, for a total of nine gained.  New York loses one seat after 2020 and two seats after 2020, for a total of three lost.  According to Trende, California does not lose seats but picks up only one between now and the 2040s.

Different variables will yield different predictions.  But it seems likely that the political clout of more conservative regions like the South and Southwest will continue to grow as a result of population shifts.  And because powerful, enduring regional cultures tend to replace dwindling and attenuating immigrant cultures, a growing number of conservative Southern and Southwestern Latinos in the electorate may doom the hope that Latino immigration and fertility will propel a Democratic coalition of Latinos, African-Americans and white progressives to permanent power in American government.

The Republicans, to be sure, have their own problem with non-Hispanic white nativists.  Both parties need to start thinking about how to appeal to the suburban, middle-income American voter of 2050 who may be Mexican on Cinco De Mayo, Irish on St. Patrick’s Day, German during Oktoberfest, and Anglo-American on Thanksgiving Day.