"Holy sh*t! I was terrified": Actor Rahul Khanna on "The Americans," his "simulated sex waiver" and filming that infamous suitcase scene

This scion of conservative Bollywood cuts loose as the Pakistani agent who strangled a U.S. spy on "The Americans" 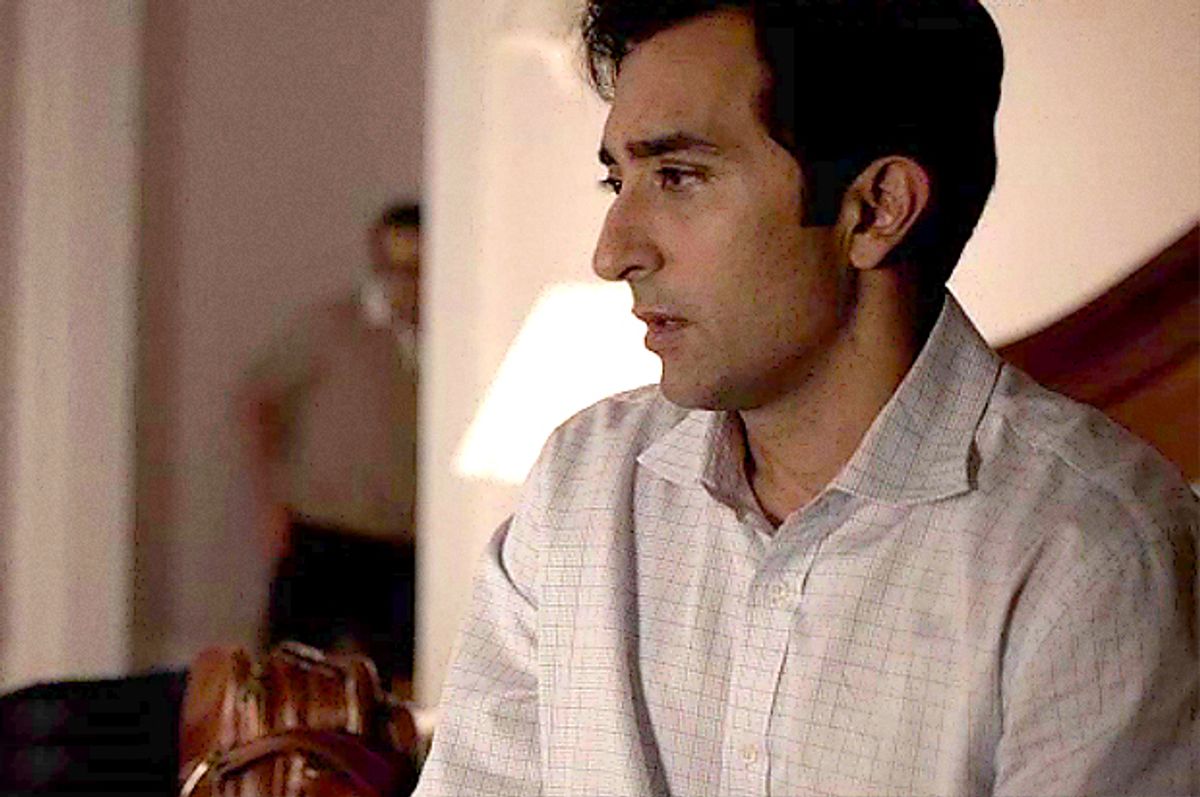 For American audiences, Rahul Khanna is just another actor on FX’s “The Americans,” a show stacked with fascinating supporting performances. But for anyone familiar with the Indian film industry, Khanna is instantly recognizable—both for his own work as a film star and for his last name, which marks his membership in a Bollywood cinema dynasty. Khanna’s younger brother Akshaye is a bona fide Bollywood star, and their father, Vinod, was a household name in the ‘70s and ‘80s. And just to give you a sense of relative fame: “The Americans” lead Matthew Rhys has a bit over 14,000 followers on Twitter. Rahul Khanna has 415,000 — and, from what I can tell, many more shirtless photos of himself.

Bollywood cinema is a lot more constrained than its American counterpart, specifically when it comes to portraying culturally taboo topics like sex, drug use and homosexuality. Perhaps because of this Khanna has demonstrated an interest in eclectic work: His first role was in controversial director Deepa Mehta’s “Earth,” and he’s had roles in English-language films like 2002’s “The Emperor’s Club.” In “The Americans,” Khanna plays Yousaf, a Pakistani intelligence agent involved in the Afghanistan conflict in the ‘80s — and, as a result, a target for protagonists Philip and Elizabeth Jennings (played by Rhys and Keri Russell). In a show that is definitively about foreign nationals and deadly romance, Yousaf was central in a particularly grisly subplot: the strangulation, mid-coitus, of an American spy, followed by disposing of her naked body by stuffing her into a suitcase—dislocating joints and breaking bones in the process—and then carrying the bag out the front door. Barely safe for American prime time; not safe for Indian audiences. I talked to the actor about that scene, his role on the show, and straddling the cultural divide in his work.

What’s the reaction to your role from your fans in India?

It’s a bit bittersweet, because for the first time ever Indian audiences can watch American shows on the same day that they air in the states. [“The Americans” is on] a channel called Star World Premiere. But the downside is that because Indian censorship regulations are so strict, they have to cut out a lot of stuff from the show. It was kind of bittersweet. People can see the show the same day it airs here, but at the same time they’re not going to see everything because it goes through the hands of a censor.

Yes, I read that part of that scene was cut. India’s a traditional country. American television, by comparison, is very eager to push the envelope. Is that one of the reasons that you were interested in this role?

Of course. For an actor, the more the envelope is pushed, the more exciting it is. You get to do so much more. You get to really explore different facets of your personality. So I love it. I find the quality of American television today is just extraordinary. It’s on the same level, if not greater than, the quality of feature films being produced. As you said, the envelope is just being pushed all the time creatively, and it’s such a rich time for television. So for me it’s thrilling to be on what I consider one of the finest shows on television today. Also it’s exciting for me because it’s not often they write parts like this, for someone like me. I was really lucky to get it.

You’re playing an ISI officer, which is very interesting because that’s obviously a sensitive subject for any Indian person.

Of course. But what I love about him is that he’s an ISI officer who’s a fish out of water in his world, because he’s not a fundamentalist—he doesn’t subscribe to a lot of the fundamentalist ideology that’s brewing in Pakistan at that time. He’s a bit of an outsider. And what I love about “The Americans” is that we always thought of the Russians as the bad guys and the Afghans as the bad guys, but at the end of the day the show shows you that everyone is human. It’s relationships, it’s a human stories. You’re rooting for the people you love, more than the politics of it all. It sets up what we know is going to happen in history, but it also shows you how much everyone else was responsible for the problems they have today. That America really brought this upon themselves by being hand-in-glove with Afghanistan against the Russians.

Tell me a little about filming. I don’t know how often you, as an Indian actor, have had the opportunity to strangle someone during a sex act and then shove them into a suitcase. That’s a whole set of actions I’ve never seen in a Bollywood film.

Oh my god, it was a dream come true. It was fun! As I said, as an actor you’re always looking to stretch yourself and do something different from what you’ve done before. And I’ve generally always played more romantic, gentle roles, nothing too extreme. This was like, “Holy shit!” I was terrified, but I was also really excited because it was so different from what I’ve done before. It’s such an exciting twist in the whole tale.

When I was initially approached for this role, they were very upfront about the fact that there would be sex and there would be a certain level of nudity. I read the script just to gauge what it was—I’d never done anything this graphic before and I wanted to see if I would be comfortable. It was a big question mark, an unknown world. And when I read the script, it seemed quite manageable; it didn’t seem over the top. So I went ahead with the negotiations, we closed the deal. Then as happens in television, they sent me a revised script, which was way more graphic than the original one—and they also sent me this terrifying thing called a nudity and simulated sex waiver that actors have to sign upfront; it’s all very sternly worded and very strict. So that just freaked me out. It was about a week of panic and phone calls with producers and directors and managers and casting directors—and everyone had to pacify me and explain to me what exactly it would be and I would not be made to do anything I was uncomfortable with, even though the contract was so sternly worded. That was the most exciting. My manager, I think, is going to be in therapy for the rest of her life, with that one week.

But— I know a lot of actors say this about crews that they work with but this is one of the finest and nicest crews I’ve ever worked with. They went out of their way to make sure I was comfortable; the actress I was working with [Gillian Alexy] couldn’t have been nicer and less stressed out and super-comfortable. So that made it all very easy, I would say. But it was probably one of the most bizarre day of filming of my life. We filmed it over the whole day; it was hours and hours and hours, maybe a full day of shooting. Because we filmed with three elements. One was Gillian Alexy, the actress herself, who was in a few shots. Then there was this incredible contortionist, who we used for some of the other shots. Then there was also a prosthetic dummy that was brought in. Matthew Rhys and Keri Russell and I were going through this process together and there were several times during the day that we’d just look at each other and shake our heads at just how bizarre this all was. If you’ve seen the episode, Keri Russell takes a picture of us breaking the body. She had that camera on set, and in between takes she actually took a picture of Matthew and me rehearsing the scene. She was very funny, like, “I am going to send this picture to your mothers in Wales and Bombay.” We are all probably going to hell.

Then—because the character is naked, the actress was naked, the contortionist was naked, the prosthetic dummy was naked—there was lots of skin on set. At one point, Matthew was bending over and his pants rode down a bit. You could see maybe two centimeters of his bottom. And the director yelled, “Cut, cut it out, we can see a bit of Matthew’s bottom. Please adjust the pants.” And we all just burst out laughing. You have to imagine the scenario—all these naked women and these limbs, and poor Matthew. Like one centimeter of his bottom was showing. He was like, “God forbid you should see my ass.” [Laughs.]

Your other family members are in the Indian film industry. What’s their take on you doing American work?

Strangely, my brother was the one who initially had recommended the show to me, before I was even approached. He’d been a fan of the show. I had just started watching it when I was approached for this part. So he was very excited when I got the role, because he was a fan of the show, and he really appreciates the writing and the quality of television in America today. My dad hasn’t seen the show—being from an older generation I’m not sure he quite gets television now is on par with feature films, because there’s still a little bit of disconnect between feature films and television in terms of quality. He hasn’t watched the show yet; as soon as he does watch it I’m sure he’d be interested. My mother would be horrified.

The type of censorship the show is subject to in India is an issue so specific to that part of the world.

Is that one of the reasons that you felt like you wanted to move into American acting instead? Was it limiting the work you were able to do?

No, it’s not that. And it’s not a question of wanting to move in one direction or the other, because as an actor you have so little control over your own career. You’re dependent on what comes your way, unless you’re a producer, and you produce your own stuff. But if you’re just an actor you’re really at the mercy of what comes your way and what’s written and what’s right for you. So it’s just a question of being open to different experiences wherever they are geographically, whether in America or India. I’m always looking for new and exciting things.

The thing about Indian censorship is that it’s a strange time in India right now; we’re economically so progressive but at the same time we’re going through this moral, right-wing, fundamentalist mind-set where everyone’s objecting to anything that is deemed slightly offensive to anyone. Everything is suddenly offensive and everyone is protesting and banning, which I think is very unhealthy for the artistic community, because how does one progress if one is not allowed the freedom of expression? How can you tell adults in a democracy what they should or shouldn’t watch? That choice should be up to them. I think it’s something we have to work on as a nation, and hopefully we will work it out.