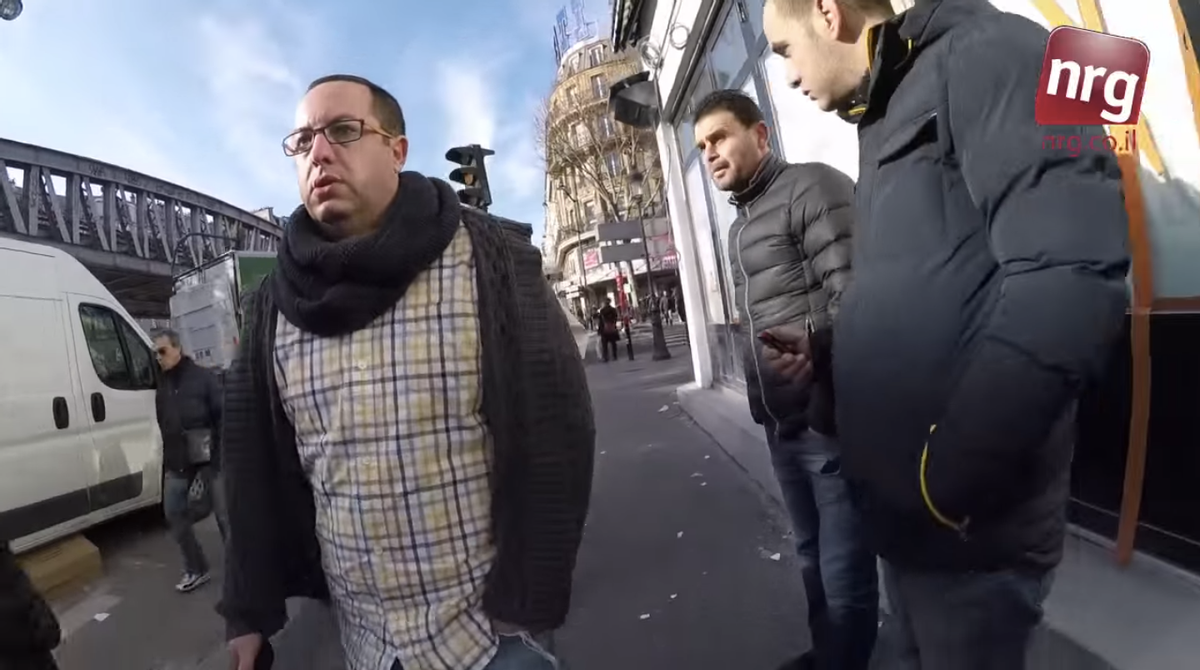 Israeli journalist Zvika Klein was recently filmed walking the streets of Paris wearing a yarmulke and tzitzit in an effort to reveal the truth about anti-semitism in the the European city. The undertaking was inspired by a viral video of actor Shoshana Roberts walking around New York City for 10 hours, during which time she was catcalled over 100 times. To be sure, Klein experienced his own share of hateful comments.

Klein wrote that in areas heavily populated by tourists, he didn't receive much attention. The trouble began when he ventured into suburban, predominantly Muslim neighborhoods.

In an article published in the Israeli news organization NRG, Klein wrote of his experience:

In one of the mostly-Muslim neighborhoods, we walked into an enclosed marketplace. "Look at him! He should be ashamed of himself. What is he doing walking in here wearing a kippa?!" one Muslim merchant yelled. "What do you care? He can do whatever he wants," another, seemingly unfazed merchant, answered. Over at a nearby street I was lambasted with expletives, mostly telling me to "go f*** from the front and the back."

NRG is owned by Sheldon Adelson, a Jewish-American billionaire who is a vocal supporter and friend of Israeli Prime Minister Benjamin Netanyahu.

Europe has been rocked by several acts of violence directed at the Jewish population, including the recent murder of two people in Copenhagen (one outside a synagogue; the other at a free-speech forum) and an attack at a Parisian kosher grocery.

On Sunday, Israeli Prime Minister Benjamin Netanyahu issued a call to European Jews, urging them to immigrate. "Extremist Islamic terrorism has struck Europe again, this time in Denmark," he said. "We are preparing and calling for the absorption of mass immigration from Europe. To the Jews of Europe and to the Jews of the world I say that Israel is waiting for you with open arms."

In 2014, over 7,000 Jewish people moved from France to Israel, and inquiries about potential moves increased 300 percent after the January attacks in Paris.

Last month, French President Francois Hollande reached out to French Jews in the wake of violence: "You, French people of the Jewish faith, your place is here in your home. France is your country," he said in a speech on the 70th anniversary of the liberation of Auschwitz.