"I'm going to hold my nose and vote for 'The Imitation Game'": An Oscar voter reveals why "Selma" will lose, Michael Keaton will win and the secrets of her ballot 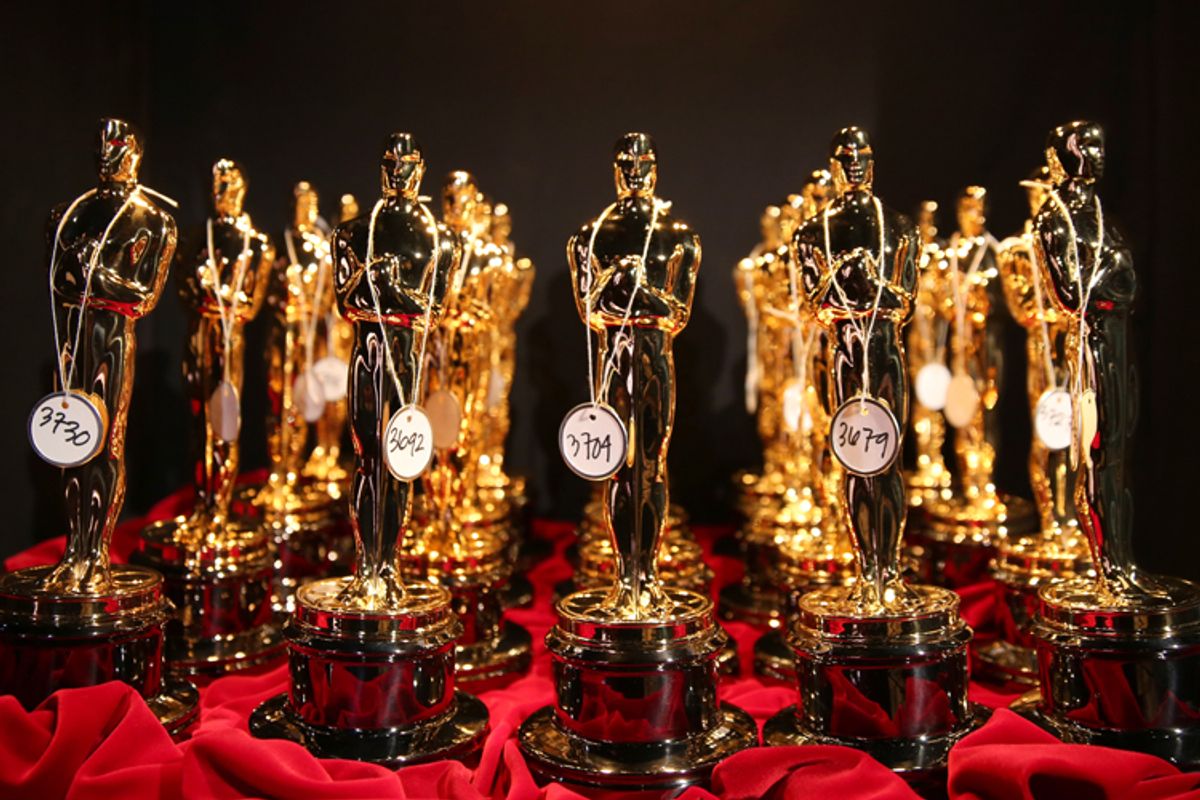 Oscar statues are lined up backstage during the Oscars at the Dolby Theatre, March 2, 2014. (AP/Matt Sayles)
--

The Oscars are such a vaunted institution that it can be easy to forget that there are real people — approximately 6,000 flawed, biased, easily-influenced-by-Harvey-Weinstein people — doing the voting. In order to help us get some insight into voters' thought processes, The Hollywood Reporter is running a conversation with a different Academy member each day leading up to the ceremony on February 22nd. Here are the best excerpts from today’s chat with anonymous female academy member, which is pretty enlightening about the whole process.

On “Selma”
"What no one wants to say out loud is that Selma is a well-crafted movie, but there's no art to it. If the movie had been directed by a 60-year-old white male, I don't think that people would have been carrying on about it to the level that they were. And as far as the accusations about the Academy being racist? Yes, most members are white males, but they are not the cast of Deliverance — they had to get into the Academy to begin with, so they're not cretinous, snaggletoothed hillbillies. When a movie about black people is good, members vote for it. But if the movie isn't that good, am I supposed to vote for it just because it has black people in it?"

On J.K. Simmons' "Whiplash" character as a role model
"The funny thing about Whiplash is that while the rest of the world thinks that the J.K. Simmons character is an overbearing, horrible monster, there are many people in Hollywood who would model themselves on that character."

...and why she's voting for him
"I'm voting for him because he was great in the movie — and because he was in 5,000 episodes of Law & Order. In other words, he's been acting forever, I've seen enough of his work to know he is a journeyman, and I'm happy to be able to recognize him."

Who's her pick for Best Picture?
"On paper, The Imitation Game seemed to be the one to me .... So why isn't it receiving more recognition? I'd like to believe it's karma for Harvey [Weinstein]. But I'm going to hold my nose and vote for it anyway because when you vote for best picture, what you should try to do is vote for the movie that, years from now, people will still watch and talk about."

On voting for Michael Keaton over Eddie Redmayne for Best Actor
"He seems grateful, not particularly needy, and I don't know when he'll ever get another chance at this; the other nominees will.”

On Julianne Moore as a lock:
"The minute I saw Still Alice, I remember thinking, "This [best actress race] is over. Four other women are going to have to get dressed and go to 5,000 dinners knowing they have no chance."

On “Inherent Vice”:
"I put in the Inherent Vice screener, and it became apparent that it's a terrible, incoherent movie, so I turned it off. I thought it was not possible for me to hate something more than I hated The Master, but I hated this more.”

On not voting for best sound mixing:
"I never vote for these categories because I have no idea what's good sound or bad sound — and believe me, I'm not alone among Academy members"