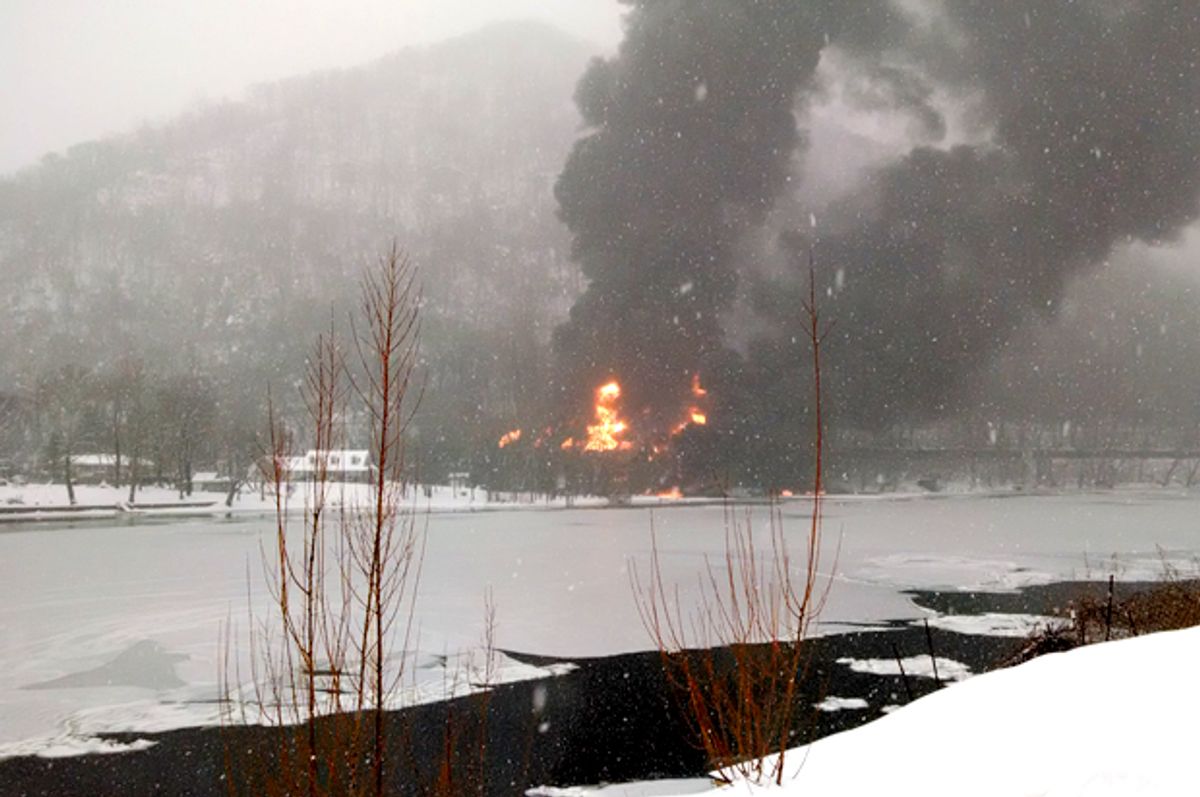 Wednesday morning, an explosion tore through an ExxonMobil oil refinery in Torrance, California, injuring four people and spewing ash for miles. Over in West Virginia, an oil train continued to burn after it careened off the tracks and exploded on Monday, destroying one home and forcing hundreds to evacuate.

Both incidents produced dramatic footage, and were certainly traumatic for the people placed in immediate danger, and who now face threats to their drinking water safety, in West Virginia, and air quality, in California. While both incidents fortunately stopped short of becoming major tragedies, they are nonetheless emblematic of serious issues underlying the United States' boom in domestic energy, revealing yet again how safety considerations are being brushed aside in the push for increased production and profits.

U.S. oil workers are currently staging the largest national oil strike in more than three decades. More than 5,000 workers at 11 plants, including nine refineries that account for a full 13 percent of U.S. production capacity, are at present refusing to work. The Torrance explosion, occurring as the strike entered its 18th day without resolution, served as an almost eerily timed reminder of what it is the United Steelworkers union says is its top demand: worker safety.

As USW International vice president Gary Beevers put it in a statement announcing the beginning of the strike:

This work stoppage is about onerous overtime; unsafe staffing levels; dangerous conditions the industry continues to ignore; the daily occurrences of fires, emissions, leaks and explosions that threaten local communities without the industry doing much about it; the industry’s refusal to make opportunities for workers in the trade crafts; the flagrant contracting out that impacts health and safety on the job; and the erosion of our workplace, where qualified and experienced union workers are replaced by contractors when they leave or retire.

It's about, in other words, a business model that they say prioritizes production over the health and safety of its workers. Industry-wide, gas and oil workers are six times more likely to die on the job than the average American. And that's not to mention the cost to communities in the vicinity of such operations.

It's an argument that has resonated with environmental groups, several of which are publicly supporting the strikers, whom they depict as yet another casualty of the fossil fuel industry's greed. "Its a pattern we’ve seen again and again," Michael Brune, the executive director of the Sierra Club, said in a statement, "-- oil executives prioritizing their own profits over the well-being of everyone else."

Speaking of patterns: It's no longer possible to call it a "wake-up call" every time a train derails and explodes, because such accidents have been happening with startling frequency: West Virginia's oil train derailment was actually the second such incident to occur last weekend -- a train derailed and caught fire north of Ontario on Saturday night -- and the second in 10 months to involve a CSX train carrying Bakken oil. It is just the latest in a long string of accidents that have occurred throughout the U.S. and Canada since 2012, when U.S. shale oil production took off. The majority can best be described as near-misses, with the major exception of the train that, in July 2013, plowed into a Quebec town, killing 47. The specter of that disaster hangs over the communities that lie along oil trains' routes -- or it would be, if not for the fact that many of those communities aren't even told that these volatile hazards are barreling past them.

In July of last year, the Department of Transportation at long last proposed new safety rules for so-called high hazard flammable trains, a move that Kristen Boyles, an attorney for EarthJustice, called “sort of a step in the right direction." The proposed rules would get the cars that are most prone to puncture and explosion off the tracks. However, the two-year phase-out period, Boyles told Salon, is worryingly long. The trains involved in the West Virginia explosion, meanwhile, were of a newer, supposedly safer model -- or, as Boyles described it, “slightly better, as compared to a completely inadequate and admittedly horrible baseline” -- suggesting that even these new measures aren't going far enough.

As the DOT's Pipeline and Hazardous Materials Safety Administration takes its time finalizing its regulations (it recently pushed the release back from March 31 to May 12), many in the industry are arguing that they need more time to update their retrofit and replace their cars, and want to go ahead and continue to ship oil apace -- if not faster -- in the meantime. Their concerns are perhaps best summed up by Thomas Simpson, president of the Railway Supply Institute, a trade organization representing rail suppliers. When the proposed deadline was announced, Simpson complained to National Geographic that it would "idle cars waiting for shop capacity and adversely affect the movement of crude and ethanol" -- an unthinkable situation, apparently, even if such a scenario would also help prevent future accidents.

Of course, all of these battles for even a reasonable modicum of safety belie the ultimate aim of those opposed to fossil fuels: to move away from them completely. If we're to limit global warming to the internationally agreed-upon 2 degrees Celsius, most of what remains must never be burned. That's why, from a climate perspective, a pipeline, even if it were safer, will never be an acceptable alternative to rail transport, and even the best of oil worker safety measures will be but second-best to an economy built on clean energy jobs.

As David Turnbull, the campaigns director at Oil Change International, said in a statement supporting the USW strike, "We look forward to the day when energy industry workers are able to focus on safer, just, and more stable jobs in a clean energy economy and aren’t tied to the profiteering whims of Big Oil."

No one's pretending we're there yet. But if we want our energy not to come at the expense of unreasonable risks to workers and communities, then in the meantime, it's the very least we can do to demand that the industry be held to stricter standards.