This is why they hate us: Fox News, drones, "American Sniper" and the gross face we show the world

The government thinks it can counter ISIS on Twitter. The real problem is how our actions breed disgust worldwide 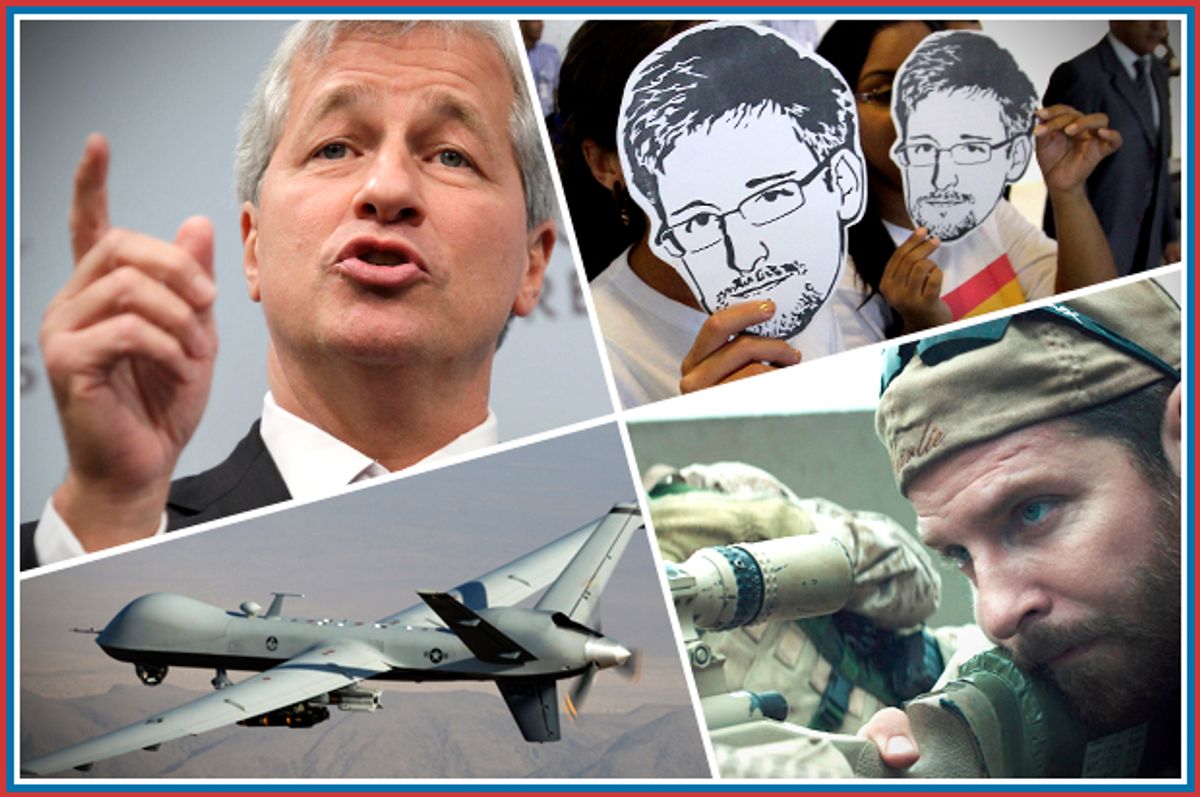 Imagine if the United States had waged its Cold War ideological struggle with the Soviet Union on the same three-year cycle consumer goods companies currently use for branding?

Gone would be the CIA-sponsored campaigns to get great literature through censors into the hands of Eastern Bloc readers. Gone would be the liberating power of jazz and rock, leaked through to dissidents outside of any known official sponsorship. Gone, especially, would be the symbol of American freedom, backed by the appearance (it was, often, just the appearance) of policies supporting freedom, at least for white Americans.

Instead, you might have the shoddy branding campaign the U.S. is fighting ISIL with right now, conceived largely in terms of unique impressions on Twitter rather than whether we can change larger narratives about America and the West.

“We’re getting beaten on volume, so the only way to compete is by aggregating, curating and amplifying existing content,” Under Secretary of State for Public Diplomacy Richard A. Stengel said for a recent New York Times story.

The Cold War's ideological warriors are surely spinning in their grave at that sentiment.

Part of the problem seems to be the conflation of an ideological campaign with efforts to provide potential recruits with legitimate diversion, as exemplified by the Countering Violent Extremism summit at the White House on Wednesday. Not to mention, the diversion effort selectively targets Muslim populations -- by no means the only community whose youth contemplate violence.

Part of the problem seems to be a reliance on slickly produced propaganda rather than something more substantial (though perhaps, in its fifth incarnation, CVE will consist of something more meaningful?).

Another persistent misconception lies in where ISIL's own propaganda has been effective. Both British and -- less officially -- American officials have called on Twitter to police speech, rightly pointing out the influence of ISIL propaganda posted there. Yet such views utterly ignore the powerful boost Fox and (until it came to a Jordanian pilot burned alive on video) CNN have given the very same propaganda by airing it for hours and days. ISIL propaganda on U.S. cable channels "radicalizes" different groups of people in ways that are every bit as dangerous as a young Muslim kid watching ISIL videos online, ways that feed a clash of civilization narrative rather than that of America's Middle Eastern allies combating murderous thugs trying to take and hold territory in a region of strategic importance.

That also seems to breed a lack of awareness of the degree to which our own actions serve as propaganda serving ISIL's goals. Yes, the U.S. flies drones because they are viewed as a safer (for our service members, as well as civilians on the ground) alternative to airstrikes. But the drones also persist as an audible and visual presence that permeates the consciousness of those who might otherwise oppose Islamists. “I see them every day and we are scared of them,” Mohammed Tuaiman, a 13-year-old killed, as an alleged al-Qaida in the Arabian Peninsula member, in an American drone strike last month, said to the Guardian in an interview laws year. "We even dream of them in our sleep.” And yet people in the U.S. rarely weigh those dreams against the nightmares we see over and over on Fox and CNN. It's not enough to say we don't behead people (though our close allies in Saudi Arabia do) or burn them alive in cages if our omnipresent weapons permeate people's consciousness like an ISIL video being replayed on Fox.

But a very big part of the problem, it seems to me, is that the U.S. is thinking only in terms of "countering" an enemy. "We've got to discredit these ideologies," President Obama said at today's CVE summit. In part this means their American narratives end up scolding ISIL's narrative, rather than presenting another more resonant one. More generally, however, it doesn't even try to offer up America as the kind of promise to others it represented during the Cold War. The U.S. will not win this ideological war by attempting to do no more than drown out ISIL's message in Twitter hits.

What does America think it is offering the world, beyond submission under the weight of an unrivaled military?  Why would people choose that over an ideology that promises -- falsely -- principle and morals? With the austerity America's bankers demand, the U.S. isn't even offering financial stability.

Obama's promises on that point ring hollow. "We will keep promoting development and growth that is broadly shared," said a president whose country ranks near the top of the developed world in inequality, "so more people can provide for their families." And the president who has presided over six years of impunity for the bankers who crashed the global economy promised to combat corruption. "We’ll keep leading a global effort against corruption, because the culture of the bribe has to be replaced by good governance that doesn’t favor certain groups over others."

"The essential ingredient to real and lasting stability and progress ... is institutions that uphold the rule of law and apply justice equally," said the president to a community often deprived of just that.

So to the extent we're promising something, we're not delivering on it.

Then there's the larger picture. Consider what we've sold in two of our greatest export industries in recent years. Hollywood continues to sell its product around the world (with illegal knockoffs extending its reach). Yet it has been selling -- with the explicit assistance of the administration -- the torture of "Zero Dark Thirty" or the blind targeting of "American Sniper" rather than America as a beacon of freedom.

America's tech giants had been a vehicle for communication and even for mobilization in recent years, until we learned the degree to which the NSA had prioritized a futile bid of omniscience online over the viability of those brands and what they stood for, both from a commercial and ideological perspective. More recently, we've learned American hardware, too, may have been hijacked as another tool of spying.

I'm not a fan of intelligence agencies buying out cultural institutions, as they did during the Cold War.

But if you're going to wage an ideological war, do so competently. You're not trying to sell a consumer an overpriced box of cereal or watery beer. You're trying to make an affirmative argument about what America has to offer.