Oscar voter or right-wing pundit: Can you tell the difference? (QUIZ)

They have more in common than you might expect 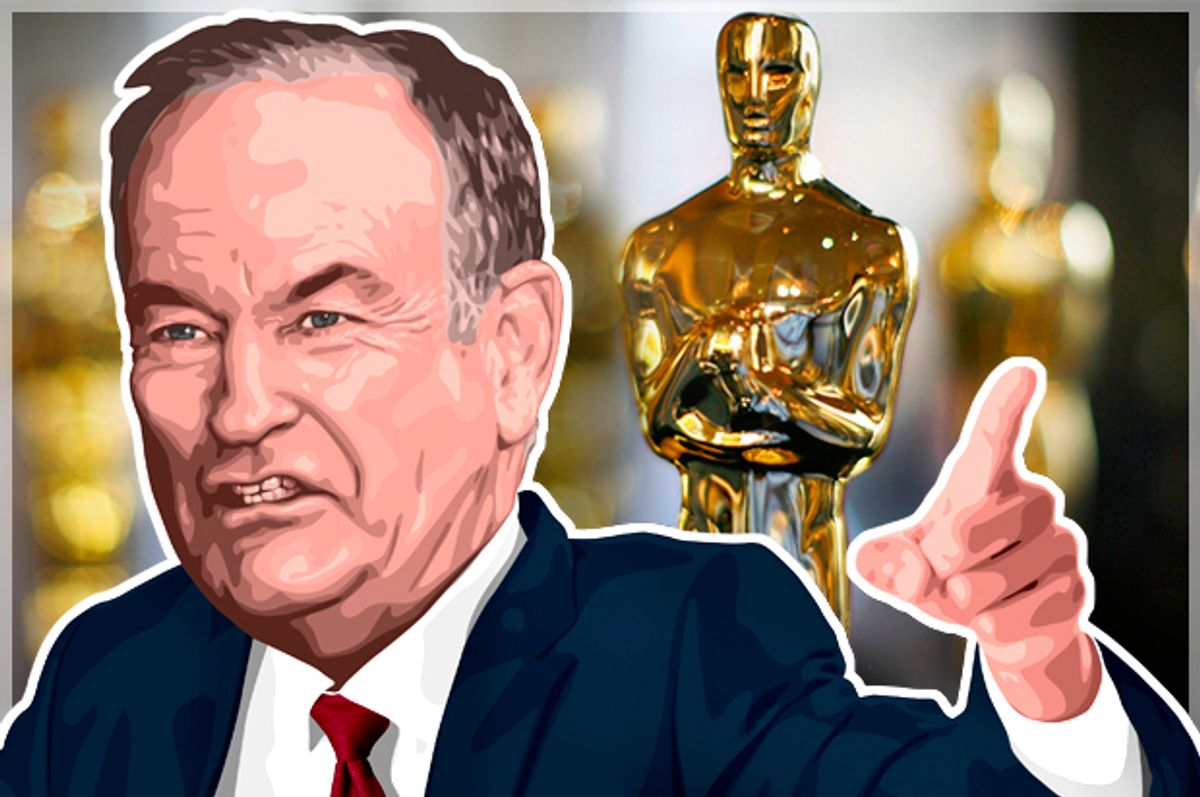 Diversity has never been the strong suit of the Academy Awards, but the overwhelming whiteness and maleness of this year's nominees is a stark reminder of some alarming facts:

As recently as 2013, the Academy boasted 6,028 voting members. Ninety-four percent of those voting members were white. Seventy-six percent were men. The average age of an Academy voter in 2013 was 64 years old. And none of those percentages have likely shifted in the two years since. Judged against this backdrop, the decision to nominate precisely zero people of color in the acting categories is no less infuriating, but at least it begins to make sense. The Academy is in some ways deeply conservative, and it shows.

It especially showed last week, when the Hollywood Reporter came out with its "Brutally Honest Oscar Ballot" — a now-annual series of interviews with anonymous Academy Award voters, which has if anything intensified the group's image problem.

Take, for example, this year's first featured voter, who said on the topic of "Selma": "Am I supposed to vote for it just because it has black people in it?" And about "Boyhood" star Patricia Arquette: "[She] probably was sorry she agreed to let them film her age over 12 years." On charges of Academy bigotry, the anonymous voter struck a defiant note: "Most members are white males, but they are not the cast of 'Deliverance' — they had to get into the Academy to begin with, so they're not cretinous,  snaggletoothed hillbillies."

A few things immediately jump out here, in particular the way in which racial and sexist provocations are refracted through a prism of #NotAllWhiteMen indignation. All of which — in the context of the the Oscars' well-established diversity deficit — brings us to wonder the following: Is the Academy really so different from, say, members of the right-wing media? And also: If approached by one of each — in a West Hollywood nightclub, perhaps, or in the corridors of News Corp. headquarters — could you really tell who was who?

That in mind, we've compiled an extensive list of quotes from both anonymous Academy Award voters and the representatives of various conservative news companies,* and organized them into 8 single-topic, multiple-choice questions.** Each question features only one Academy Award voter. Your job is to figure out which statement is theirs.

A. "The critical and commercial success of 'Sniper' demonstrates there is a great yearning out there for well-made films that do not offend the sensibilities of Middle America." (Source)

C. "'American Sniper' is the winner of the year, whether or not it gets a single statuette... I don't care what your politics are — it is literally the answer to a prayer." (Source)

D. "The movie is a testament to the warrior – to the man in the arena. Everyone criticizing the film is on the sidelines hurling insults. Chris [Kyle] was in the arena, fighting for us in a dangerous and complicated war." (Source)

C is the Oscar voter.

A. "Hollywood is so racist it would never vote for a movie like 'Selma'! Wait, that's idiotic." (Source)

C. "The race-grifters are also intentionally ignoring the fact that just last year, a mere 11 months ago, this very same Academy awarded '12 Years a Slave' an Oscar for Best Picture." (Source)

D. "Based on the way the Academy was able to embrace '12 Years a Slave' and various black actors and actresses through the years, I don't believe for one minute that race had anything to do with the director or actor from 'Selma' not getting nominated." (Source)

A. "Contrary to what some have asserted, it's not as if it required great courage to make that movie -- maybe if you made it in Mississippi in 1930." (Source)

B. "Seriously, how long has it been? How many times can you keep bringing [slavery] up after 150 years?" (Source)

C.  "Slavery was the most horrendous of institutions, but it has been over since 1865." (Source)

D. "It didn’t matter if it was good or bad. I haven’t seen it. It was going to win. It had the magic word in the title: Slave."(Source)

A is the Oscar voter.

Question 4: On "The Lego Movie"

A. "[The Lego Movie] pushed an anti-business message to kids." (Source)

B. "I thought 'The LEGO Movie' was horrible. It was whack and I just did not like it at all." (Source)

C. "Don’t get me wrong, there are some original ideas here... That said, I’m not surprised Michael Moore is a fan." (Source)

D. "No 'Lego Movie' for best animated feature? That is … bizarre." (Source)

B is the Oscar voter.

A. "I think this was the best movie of the year. That is my opinion. I saw it, and I was on the edge of my seat." (Source)

B. "What resonated with me was [Chris Kyle's] motivation for making a change in his life: [Sept. 11, 2001]. He wasn't arbitrarily killing people; he was protecting his men and that was his job." (Source)

C. "Clint Eastwood's film makes a sharp distinction between the evil of the terrorists in Iraq and the nobility of the American sniper, Chris Kyle." (Source)

B is the Oscar voter.

a. "The film gives plenty of ammunition to anyone who wants to argue that the church tends to hurt more than it helps. (Source)

B. "The movie makes this particular Irish Catholic institution look about as pleasant as Abu Ghraib." (Source)

C. "The film is a witless bore about a ninny and a jerk." (Source)

A. "For most Americans, being held captive is a nightmare that they will never experience, but one would imagine under those circumstances wanting to bring whatever harm possible to the captors." (Source)

B. "There is also a thrilling moment, maybe even one that is meant to be thrilling, when the pirates look with awe and horror at the approach of a sleek U.S. Navy warship and cry in dismay: "It’s the Americans!" Not many movies these days would dare to produce such a retro feeling of pride and triumph amongst all the pathos." (Source)

C. "Honestly, this movie reminded me why I'm proud to be an American." (Source)

A. "I think the outcry about the Academy being racists for not nominating ['Selma'] for more awards is offensive." (Source)

B. "Why not talk about another black actor who was worthy of a nomination? There wasn't a better performance this year than Chadwick Boseman in "Get On Up." But [him not being nominated] had nothing to do with him being black. They could have put five other fucking guys in there!" (Source)

C. "I've got to tell you, having the cast show up [to 'Selma's New York premiere] in T-shirts saying 'I can't breathe' — I thought that stuff was offensive." (Source)

D. "If the movie had been directed by a 60-year-old white male, I don't think that people would have been carrying on about it to the level that they were." (Source)

Trick question! They're all Oscar voters.

—Tell us in the comments how you did!—

* The quotes used for this quiz, presented out of context and, yes, by way of a certain amount of cherrypicking, necessarily conflate many different political temperaments, from relatively benign to repugnant beyond measure, all in the service of an ultimately silly little quiz. We promise, however, that the purpose of this exercise is not to directly compare the attitudes of the typical Academy member with, for example, the crypto-white supremacy of a place like Taki's Magazine (which makes an appearance in Question 3). If there's one thing that compiling the following questions has demonstrated, it is that blinkered, obstinate privilege comes in all shapes and sizes. (And also, as evidenced by the "Lego Movie" question, that there is no accounting for taste.)

* * In order to add a reasonable amount of difficulty to the questions in this challenge, certain Oscar voters' responses were altered so that instances of first-person nouns and pronouns appear instead as their third-person counterparts (e.g. "The Academy voted for this movie" instead of "We voted for this movie"). However, the original source material is linked immediately following each quote, where the original quote may be viewed in full.