Why can't Caesar the ape win an Oscar?: It's time for the academy to embrace digitally enhanced performances

Some of the most memorable acting performances now are digital hybrids. The Oscars are behind the times 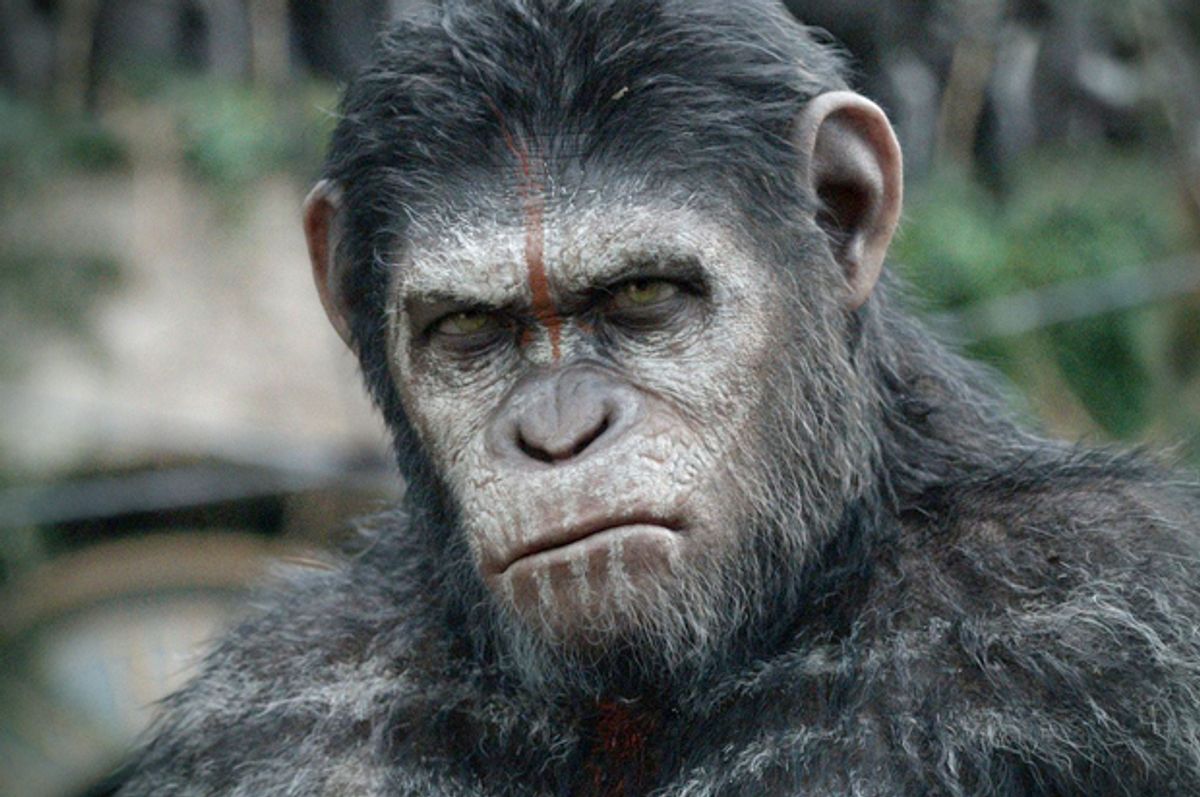 Want an ape, penguin, skeletal pirate, dragon, mutant raccoon or tortured Gollum in your movie? Some anonymous extra in a fur or rubber suit or a stop-motion puppet just won't cut it anymore. Today, to make these fantasy creatures and characters feel real and palpable, Hollywood has an arsenal of tools at its disposal — from mind-popping visual effects and 3-D animation to motion-capture technology.

But the Academy of Motion Picture Arts and Sciences doesn’t consider this digitally assisted trickery "acting." Wake up, academy. It’s the 21st century. Time to update your idea of "performance.”

The Oscars and other prizes bestowed by groups such as the New York Film Critics Circle or the Hollywood Foreign Press Association (aka the Golden Globes) award achievement in film according to fairly traditional categories: best actor in a leading role, best actress in a supporting role, best animated film, and so forth. Over at the Boston Society of Film Critics, which I belong to, our most unconventional category is best ensemble cast.

Alas, no awards for “best actor supported by computer graphics.”

In the age of digital technology, computer-generated cartoons, immersive video games and motion-capture performances by actors are commonplace. What we now understand as “acting” includes wholly or partially digitally composed characters. What begins as conventional actor-in-front-of-the-camera stuff is often augmented by artificial flavors and colors. When Johnny Deep or Geoffrey Rush go zombie in “Pirates of the Caribbean,” where does the actor begin and the pixels end?

Point being, film has become a real-world virtual hybrid. Brick-and-mortar stuff is blended with special effects and computer graphics — buildings, crowds, tigers, waves — all the time. And that extends to acting.

Yet as the blurring of the boundaries between acting that is traditional and "enhanced" shows no signs of abating, Oscar has not changed with the times.

Had the Academy Awards been more open-minded in the past, Zoe Saldana might have been at least considered a best actress contender for her role as Neytiri in the 2009 film “Avatar.” (While her role as Gamora in this year's “Guardians of the Galaxy” was largely achieved via old-school green makeup, the performances of her colleagues Bradley Cooper, playing a wisecracking raccoon, and Vin Diesel, as a walking tree, were digitally enhanced.) Andy Serkis might have been recognized for his inspiring work as Gollum in the "Lord of the Rings" and "Hobbit" trilogies. Instead, this year, the academy again ignored his outstanding and nuanced acting job as the chimp Caesar in "Dawn of the Planet of the Apes,” the sequel to “Rise of the Planet of the Apes,” which also featured leading man, I mean, leading ape Serkis.

As for animated features, only rarely is a cartoon nominated in the best picture category (aside from special achievement Oscars, it’s happened only to “Beauty and the Beast,” “Up” and “Toy Story 3”). Partly to placate animation fans (and partly to pay tribute to this genre which generates guaranteed box office gold), the academy began handing out a special “best animated feature” Oscar in 2002. Despite this progress, voice actors in these cartoons are routinely ignored. Take Robin Williams' turn as the Genie in Disney’s 1992 animated movie “Aladdin,” which many cite as one of the late actor’s finest roles. Many others are doing stellar work in video games, too, but statuette-giving societies are equally at a loss how to recognize them.

Some argue that animators, not the actors, deserve the lion’s share of the credit for these illusory human and humanoid performances. So be it. FX geeks should be rewarded for their artistry, too. The skill required to bring to life Gollum’s or Caesar’s face and smirk, or Smaug’s bellowing voice and body — to imbue those beloved characters with souls — is on par with the art of traditional acting.

A purely animated character is one problem Oscar needs to solve. Further muddying the waters is the fact that actors’ faces are routinely retouched in post-production. Take Brad Pitt’s title role in "The Curious Case of Benjamin Button.” How much of Pitt is behind all the layers of computer-added aging and Fountain of Youth effects? In the end, a digital prosthetic isn’t much different from altering a face with latex and spirit gum.

For sure, should Andy Serkis play enough of these CGI-magnified characters, someday he may be given an honorary Oscar for all his hard and pioneering work in that skin-tight motion-capture suit — probably when he’s as ancient and withered as Gollum himself.

But meanwhile, let’s face it: The "acting" category is too narrow. As more and more films feature digital performances, and as some of the biggest names in Hollywood do voice work and motion-capture work, eventually the academy and other award-donning groups will have to adapt. One idea is to sidestep the trouble of combining “real” and virtual acting. Continue to reward “pure” acting, but add a new category called "best digitally enhanced performance” or “best CG performance.”

Or, the Oscars could be bolder. Keep the same categories. But have the chutzpah to nominate not only a Bradley Cooper-as-Chris Kyle in "American Sniper," but a Bradley Cooper-as-Rocket the Raccoon in “Guardians of the Galaxy.” Not to mention a Serkis and a Saldana, from time to time.