"I am coming after you": Why Bill O’Reilly's train wreck has the right unhinged 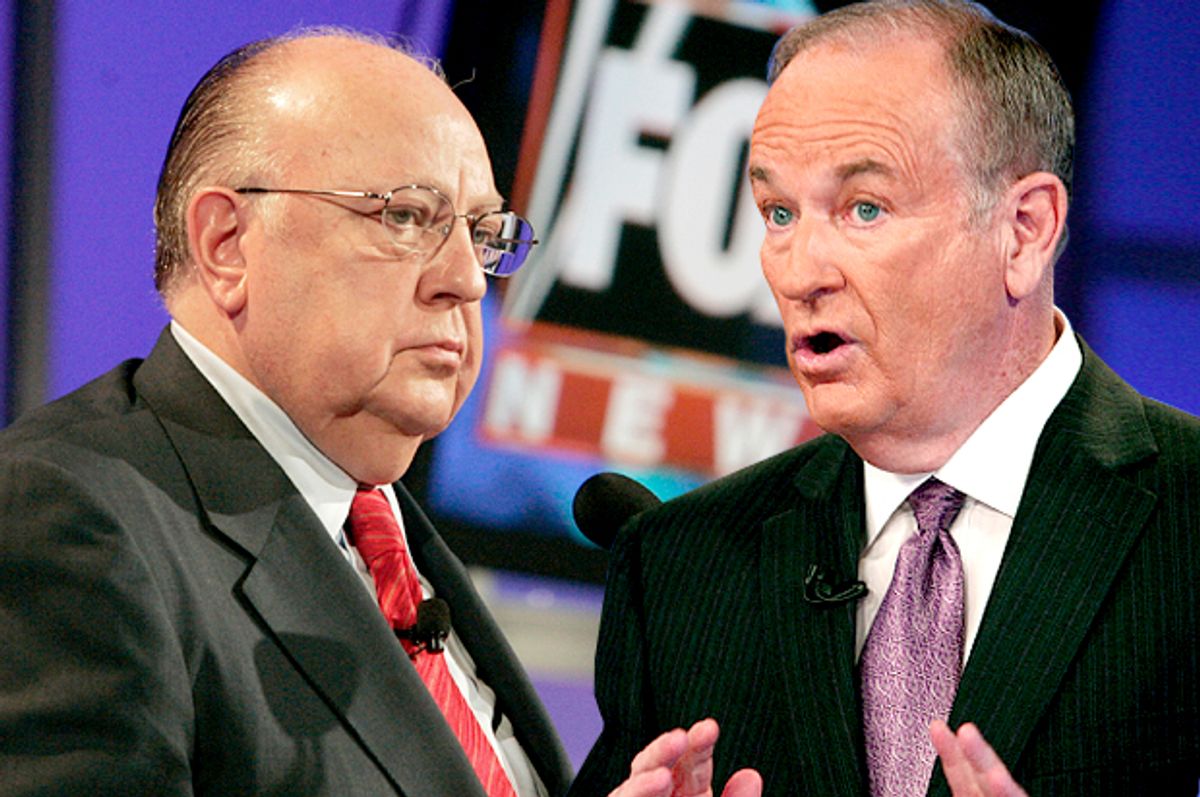 Bill O’Reilly continues his frenzied attacks on Mother Jones’ David Corn, even after at least seven former CBS colleagues have come forward, with varying degrees of outrage and disdain, to back up Corn’s reporting and dispute O’Reilly’s accounts of his time in the Falklands “war zone” – which consisted of covering demonstrations in Buenos Aires, 1,200 miles away from the actual war.

But O’Reilly went around the bend on Monday by threatening New York Times reporter Emily Steel, telling her in a phone interview that if he didn’t find her story fair, “I am coming after you with everything I have.” In case she was confused about his meaning, he added: “You can take it as a threat.”

Liberal social media went wild over O’Reilly’s threat, as though he’d crossed some obvious line of human decency or journalistic integrity and there might even be repercussions. But why? Most of us know this is O’Reilly’s M.O. Normally he sends his “producer” Jesse Watters out to menace reporters who’ve displeased him; Amanda Terkel tells her 2009 story of being stalked, harassed and ambushed by Watters here; there are many others.

When I criticized O’Reilly for his violent imagery in reporting on Dr. George Tiller before his murder, he invited me on his show promising to have a reasonable debate. Instead he told me to “stop talking” and berated me for having “blood on your hands” – and over the next week, sliced and diced the interview in unflattering and unfair ways and replayed clips with a variety of flunkies (thanks, Juan Williams) agreeing about my perfidy.

But not only does O’Reilly regularly come after critics “with everything I have,” so does his boss, Roger Ailes. I don’t see how O’Reilly’s fabrications, or his threats to reporters, will get him in trouble, when that’s exactly how Ailes runs his Fox News empire. His efforts to intimidate unauthorized-biographer Gabriel Sherman are legendary. When he couldn’t frighten Sherman or his publisher, he turned his bullying on his staffers, making clear they’d pay with their jobs and reputations if they talked to Sherman.

As one Fox employee told Ailes enforcer Brian Lewis, "Look, I know you can kill me. I don't wanna wake up tomorrow to read I'm gay and fucking sheep." Ironically, when Ailes began to suspect Lewis himself was a Sherman source, he followed his longtime P.R. guy and tried to ruin his reputation with unproven allegations of “financial irregularities.” (Sherman recounts all of this in his excellent “The Loudest Voice in the Room,” and Media Matters catalogs it here.)

And when Ailes bought a small town New York newspaper, he tried to put a rival paper out of business, as Gawker’s John Cook has repeatedly documented. Not merely by lobbying the town to disqualify the paper from receiving legal listings – the lifeblood of small local papers --  but by harassing publisher Donald Hall personally: “poking his finger in his chest, threatening to sue him, and darkly suggesting that if Hall ever retaliated, Ailes' papers would go public with damaging information.”

The Fox chairman has personally described New York Times reporters as "a bunch of lying scum," so don’t expect him to come to Emily Steel’s defense any time soon.

Besides, not all journalists are appalled by O’Reilly’s lying or bullying. In the last few days Politico’s Dylan Byers, radio host Hugh Hewitt and the lads at Mediaite have served as an annex to the Fox P.R. operation. Hewitt slavishly defended his pal O’Reilly in a tedious and tendentious 45-minute “interview” with Corn, in which he tried to suggest that Corn’s inability to remember precisely what Brown University required to designate a graduate Phi Beta Kappa was comparable to O’Reilly’s having trouble keeping his story straight on whether he reported from a Falklands “war zone."

As it happens, I’ve known Corn since college, and I’ve heard him tell countless stories about his battle for Phi Beta Kappa. Brown was a war zone, as Corn tells it -- he had to fight his way past the brown-nosers and the big-footers and haters and the “old men” -- people whose parents sent them to kindergarten late, to give them an advantage. Cruel Brown professors fired insults and even pieces of chalk at the best students; once Corn had to drag a colleague to a nearby pub for safety. Finally, Corn prevailed – and got himself the hell out of that combat situation. If you’ve read his books, you know stories of his days in the Brown war zone figure prominently.

But really, that’s what Hewitt would have you believe. Not only has Corn not gone around peddling his Phi Beta Kappa stories (of course), O’Reilly is not merely guilty of mixing up details. He has aggressively and frequently told stories about himself in a “combat situation” and a “war zone” when he was not, in order to denigrate other journalists and prove his macho bona fides.

Still, if you dislike O’Reilly and Fox, you’re inclined to think this episode has to have repercussions. I’m just not sure it will. The network makes money off the willingness of its audience to believe the worst about the “liberal media.” Lying, exaggerating, raging at Mother Jones and threatening a Times reporter are all in a day's work.