Lawmaker who thinks the stomach and vagina are connected: Question was about "safety of the woman"

Rep. Vito Barbieri's anatomy goof may have made him infamous, but his claims about abortion are just as dangerous 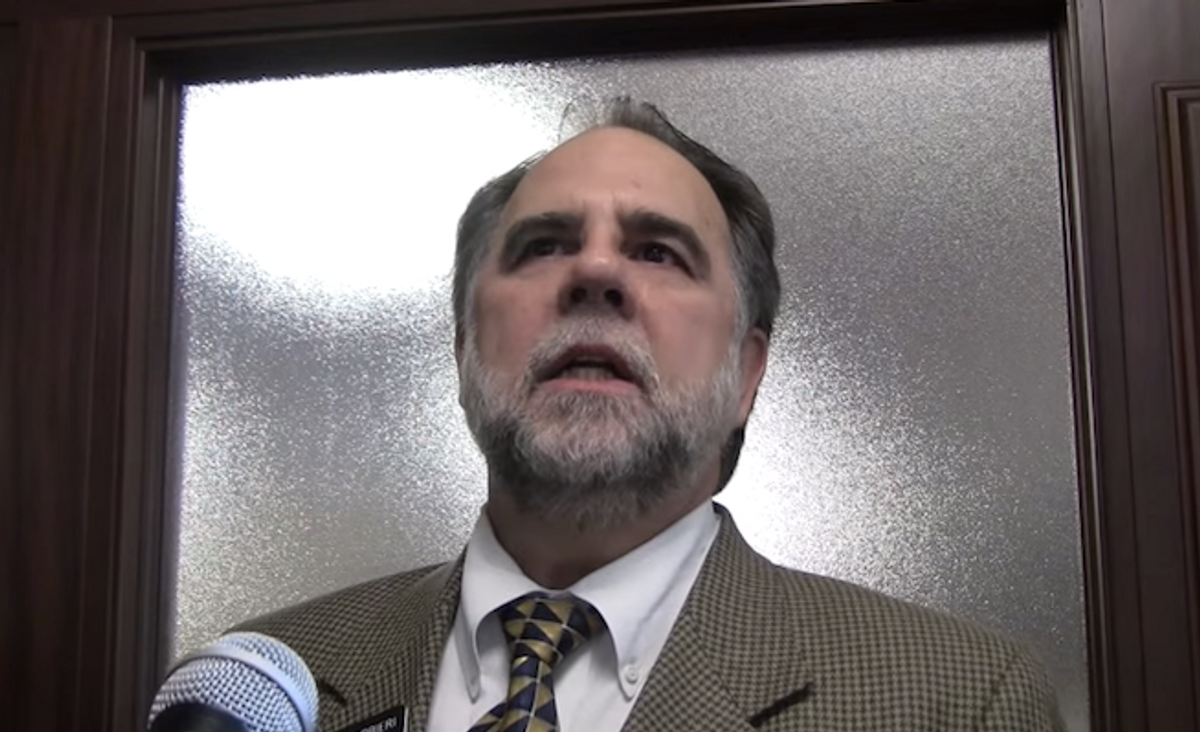 An Idaho Republican who asked if a person could swallow a tiny camera so that a doctor could conduct a remote gynecological exam said he was asking a "rhetorical" question about the safety of telemedicine abortion. (For the record, swallowed objects don't end up in the vagina.)

State Rep. Vito Barbieri questioned the doctor who testified against a proposed ban on administering abortion-inducing drugs through a remote medical consultation, a process that expands abortion access to people without local providers. “I was being rhetorical, because I was trying to make the point that equalizing a colonoscopy to this particular [abortion] procedure was apples and oranges,” Barbieri told the Spokesman-Review after his comment went viral. “So I was asking a rhetorical question that was designed to make [the doctor] say that they weren’t the same thing, and she did so. It was the response I wanted.”

In a separate interview with a local news station called Idaho On Your Side, Barbieri emphasized that his question was about safety (emphasis mine):

My whole point was I thought she was inappropriately comparing colonoscopy and the ability to diagnose that from miles away to this particular medical procedure [abortion], which is a totally different thing. And the idea that she is saying one is safer than the other and the idea, of course, the important aspect of this, is safety of the woman, safety of the expectant mother. So to try and compare these two as though they can be done, well, telemedicine, some distance away, that one can diagnose this issue and make sure that the woman is in the proper medical situation that this chemical is appropriate, then she is making an inappropriate comparison. So rather than be sarcastic, I'm just leading her down to get the answer that I want, which is that they don't compare.

Barbieri did both interviews after his initial comment went viral and made him the subject of some serious Internet ridicule, so the intent was obviously damage control. But his attempt at clarification is actually much more ignorant (and dangerous) than the question he asked in the first place. Rhetorical or not, Barbieri's question about anatomy was posed from a place of not knowing. He asked a doctor if a swallowed camera could be used to perform a remote gynecological exam. He was then given an authoritative answer -- an unequivocal no.

But in his subsequent comments to the media, Barbieri is staking out a position as an authority on telemedicine abortion. In his interview with Idaho On Your Side, he claimed the use of telemedicine in medical abortion is less safe than other procedures performed using telemedicine. But this time, there was no doctor there to correct him. And that's a problem because just as the stomach is not connected to the vagina, medical abortions performed via telemedicine are not at all dangerous.

Here's how it works: A person having a medical abortion through telemedicine goes to a local clinic to get an ultrasound and lab work done by a nurse or other trained medical technician. After that, the patient and the clinician consult with a doctor by teleconference. The doctor then goes over the patient's medical history and the ultrasound to make sure the pregnancy is less than nine weeks along and to confirm that there are no medical complications (such as an ectopic pregnancy).

Once the doctor determines that medication abortion is the right option for the patient, a drawer at the local clinic that contains the abortion-inducing pills is opened using a remote access code. Those pills are mifepristone and misoprostol. The mifepristone is taken while the patient is still in the office. After returning home, the patient takes four tablets of misoprostol over the next 24 to 48 hours.

"Part of it has to do with the convenience for women," Ibis senior researcher Daniel Grossman, also a gynecologist and an obstetrician, told ABC News. "They are able to get it closer to home and done sooner. It just adds another option for women that fits better into their lives."

More on the study from ABC:

Researchers followed 450 women between 2008 and 2009 who obtained medical abortions at six Planned Parenthood of the Heartland clinics in Iowa. Half of the women in the study accessed the services through an in-person physician visit and half through a telemedicine visit where the woman spoke to the doctor using video teleconference equipment on a secure dedicated data connection.

"Generally, during the actual expulsion, it's like a miscarriage," said Grossman. "It can be painful, but it can be easily controlled with oral pain medications. Women come back for a follow-up a week or two later to have an ultrasound to confirm that the abortion is complete."

About 1 percent of the women had a complication related to the medical abortion -- but adverse events were not more prevalent in in one group more than the other.

Ninety-four percent of the women in the study who chose telemedicine reported that they were "very satisfied" with the procedure.

There is nothing to suggest that telemedicine abortion is dangerous, but that is the claim that Barbieri is making anyway. He may have caught some necessary ridicule over thinking that the vagina and the stomach were connected, but his current campaign of misinformation about telemedicine abortion is just as ignorant. Unfortunately, his equally ridiculous comment about abortion is won't inspire nearly as many headlines.