Someone else's daughter: How women in prison led me back to my mother

Mom disowned me years ago. When I began working in prisons, people said I was compassionate. Really, it was for me 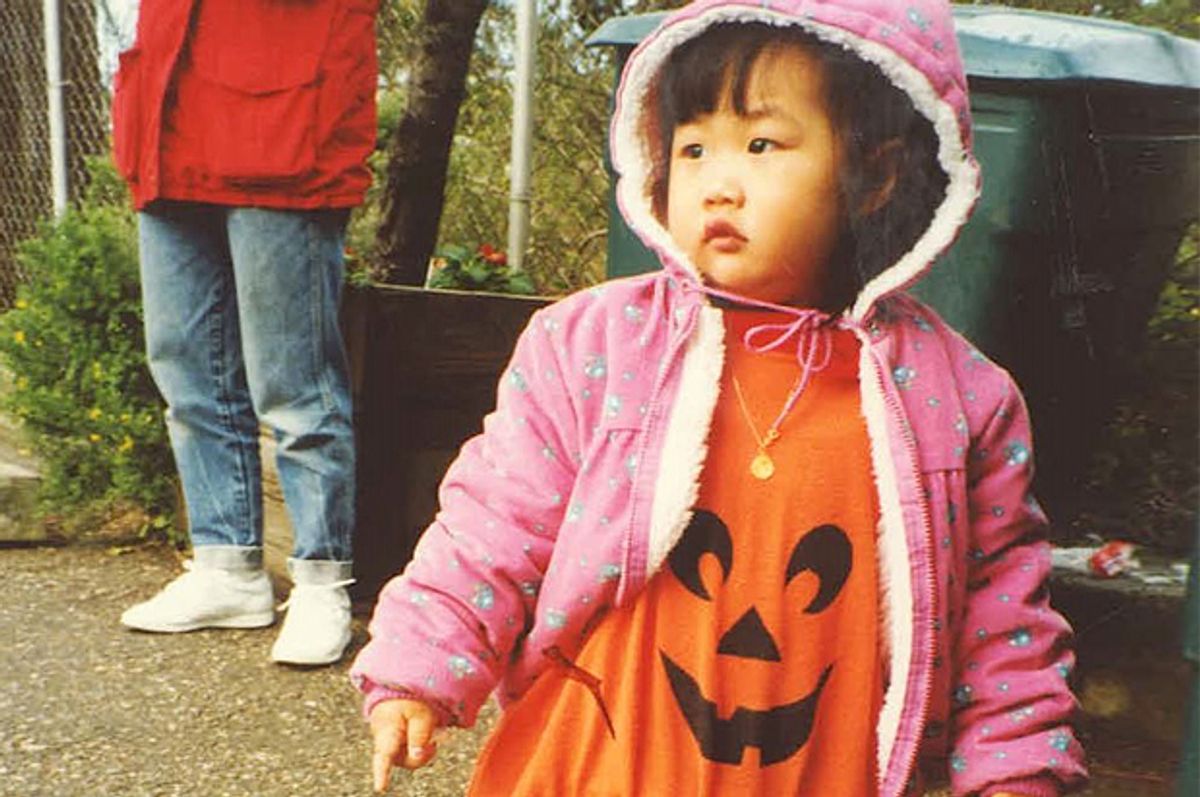 A photo of the author as a little girl
--

I work reception at a gym in Seattle. One evening, in Marin County, California, my mother turns herself in to the police. The next morning, I slide members' cards under a scanner and fold swim towels to hand out to them. When people ask, “How are you?” I say, each time, “Not terrible.” No one is happy with this answer.

That summer plays out in a split-screen montage: I bring sparkling cider to housewarmings at married couples' condos. My mother waits for sleep in a cell. I go on sunset picnics with my boyfriend and buy fabric bins at Target. With no one she knows in court, my mother stands before a judge. I perform poetry at slams in dirty bars in different cities, squint at the stage lights, laugh at the applause. She is sentenced to four years and transferred from jail to prison.

When I was younger, she told my sister — who wouldn’t stop crying — that she would send her away, just as she had done with me; she would have left me at the hospital if my grandmother hadn’t intervened. When my mother rounded the corner and saw I had heard, she fixed me a look like I was some department-store clerk who had blocked her path trying to hand out a sample.

I fly down South to visit her once. The other visitors are sweating on vinyl seats and shuddering off fat black flies. My mother comes out, so gaunt inside her jumpsuit, her clavicles hold it up like a hanger. Her nails have yellowed. She tells me through Plexiglass that she needs me to know she has always wanted me. It turns out this isn’t what I need to hear. I fly back to Seattle. I pat my boyfriend’s hand when he touches me, stare at nothing when he asks. I feel a new unease — pressing his torso against mine in bed, rolling out my yoga mat in class, tipping a charming barista a dollar. I do not have the shatterproof sanity to talk to her again, but I cannot forget that somewhere each of my mother’s days is exactly the same. Some loyal part of me remains: I do not want to be living the better life. I start volunteering for the Washington prison system, with women whose own children have not forgiven them yet.

Because I volunteer in a place often dramatized but rarely visited, people want to praise me and few want an explanation. I need them to ask. I need to explain to them this is not happening because I am good, because I am socially responsible or — worse — compassionate. I am doing archaeology. I make time for the women because they tell me more about my mother and myself than my mother ever shared with me, or may even be capable of sharing. They give me answers on this otherwise deafening ocean floor — quiet, pearlescent, dart-like answers. I go because I could not keep hiding in swing dance ballrooms and ice cream shops, because the people in my life were talking about wedding registries and Mazda models and I needed someone to tell me, some days, they wanted to take a gun to their own heart, too.

I wasn’t raised by my mother or with a clear image of her — to my extended family, she was the renegade, the cautionary tale. My grandfather would say, distractedly, “Don’t be like your mother,” the scrambling limbs of Spandexed wrestlers flickering on TV. My grandmother and my aunt summoned her specter for different reasons. In the throes of an argument, they would say, faces pinched, that I was the one kid who would end up like her. My mother has five children. I was the first she gave away as an infant and the only one she disowned as an adult. The day it happened, her heels clattered on asphalt as she charged uphill, so she could drive away in her car to where I could not follow. She screamed in front of my siblings and the neighbors’ day-lit houses, “Don't talk to me. Don't come back here. I want you gone when I get back. You are not my daughter.”

In the years I was no longer her daughter, I became more and more like my mother. I dieted more than I ate. I stared at my body for minute changes and felt relief when other people stared, too. I considered my life a daily head-on collision and resented everyone who couldn’t just sense it. I lied about big and unimportant details; I made shit up because I could. Finally, at 24, I fell in love, and it became humiliatingly clear to me how deep our sameness ran. I am a mess of insecurities and misplaced needs. I am with a man who will pick me up from the airport and cook me Sunday breakfast but does not wish to wind the banner of his life around me. Even after almost two years, it unspools my crazy heart, each day he does not say he needs me, does not promise me more. I know I sound young. He is better than me, I think — more interested in researching local systems for food justice and improving public education in rural areas. He picks his head up from the pillow some mornings to look at me, and I forget I am a person without him.

My mother loves this way. In relationships, she and I love like children: Love is reliance and reliance is love. She asked my grandmother to raise me when she met the man she would leave my father for. When this man turned to coke and paid sex, she bought herself breast implants and chased the white noise of exhaustion on treadmills. She dated. An older man from Palestine who would impregnate another woman when he visited home; a bodybuilder she met out dancing who would recruit her to sell Human Growth Hormone; an amateur soccer player about my age who still does not know she is in prison.

The harder I love, the more the shadow of my mother sharpens. I know why she screamed so much and held us out open windows. I know how when you meet someone, all the realities snap apart in you like glow sticks. I know that when you can’t hold him close enough, there is a beating in your body like a swarm of bees. I know why, when all the loves failed and left, when she was alone with five children, she stole money, numbly, systematically, because she could. I feel only clarity around my mother. For over a year now, there has been no anger. I cannot say I would not have done exactly the same.

You know what aging women do, in or outside of prison? Show you photographs of when they think they were most beautiful. Usually this was before the first person left them — or the first child made it impossible to escape. They clutch at their chests when they talk about their lovers, and they lift their chins when they brag about their kids. They are so proud of their daughters, their daughters who spend time with their grandparents, who are kinder than their mothers ever remember being as teenagers. Their daughters won’t visit them.

Some of the women never voice regret; they may not be sorry for what they did, but I don’t want them to be sorry. I only want for them to talk. When I asked my mother for the truth, she ran to her car so she could drive away to safety. The women, without knowing, tell me what it was like for her. They were her, without ever having hurt me.

I try not to give back much of myself at first. From stints as a shelter counselor, it had been drilled into me to never breach boundaries, never call this arrangement friendship. Don’t risk finding your tires slashed because something you said felt like a promise unkept. Then on a drive home from the prison, my volunteer director says, her eyes on the exit signs we hurtle past, "You know, when you don't reveal anything about yourself, the women think they're the zoo and you only came to watch."

I begin to bring in my favorite poems. I tell them how I learned to write because my aunt told me to shut up when I talked, because my grandmother wanted me to hide if I cried. I tell them how my best friend is engaged to a man who I don't believe really sees her. When one woman closes her eyes and shakes her fists and admits she has no idea why she violated that restraining order, I tell them about getting addicted to people who show me even once that I might be visible. The women never flinch at anything I say, shift in their seats, change the subject. They hold it all, without realizing it is exceptional that they can.

We do an exercise in our Restorative Circles class, role-playing people who have hurt us. The women play these characters — the baby daddies and mothers and prison girlfriends who can collapse them with one wrong word. When one woman speaks as another’s fiancé who has been sleeping around, she says, haltingly, finding the reason, “I cheated on you because ... I needed to assert my manhood because ... I don’t feel like a man.” When one woman speaks as another’s sister who refuses to return custody of her children, she says, resolutely in character, “You say you’ve changed, but I’m afraid you haven’t, and I’m just afraid you’ll hurt them.” The room tenses at these words, likely flung at many of these women more than once, but the woman speaking is bringing herself to reimagine the intention. These women inhabit the people who betray and underestimate them and find an empathy that is riveting.

And I know, in another facility elsewhere, my mother is impressing wardens with her good behavior and middle-class charm, but I find myself wondering if she could do this, if she could husk her complex, calloused pain and reveal something that would surprise me.

I was raised in my grandmother's home, for the most part, growing up. When I would stay with my mother, when she thought to introduce me, people said I looked like her. Her face would spasm. "This one looks like her father,” she corrected them. For a long time, I believed she thought I was ugly. I think now, if she could, she would tell me that it was hard for her to love her own children when she was never loved by another adult as she had hoped to be in her lifetime.

In one of the prison classes, a woman flips open her notebook to show me a photograph of her daughter. I say, "She's beautiful." I do not have to lie. The woman says, "I brought it in because you look like her." The girl in the photograph is dark-skinned, doe-eyed and sculpted like polished stone — as far as I can tell, the child of two African-American parents. I am a pale, soft-faced Filipina, often asked if I’m Korean. We have our shaved heads in common and little else.

I stare at the photograph, not understanding, and say, finally, Thank you. It is good, at least, to remind one woman of her daughter.

Anis Gisele is a writer, girlfriend, and recovering daughter. She gets better at the writing part every day.