Twitter CEO talks online harassment: "Was that really harassment and abuse? Or is that discourse?"

After admitting Twitter sucked at handling abuse, Dick Costolo is discussing what he sees as the challenges ahead 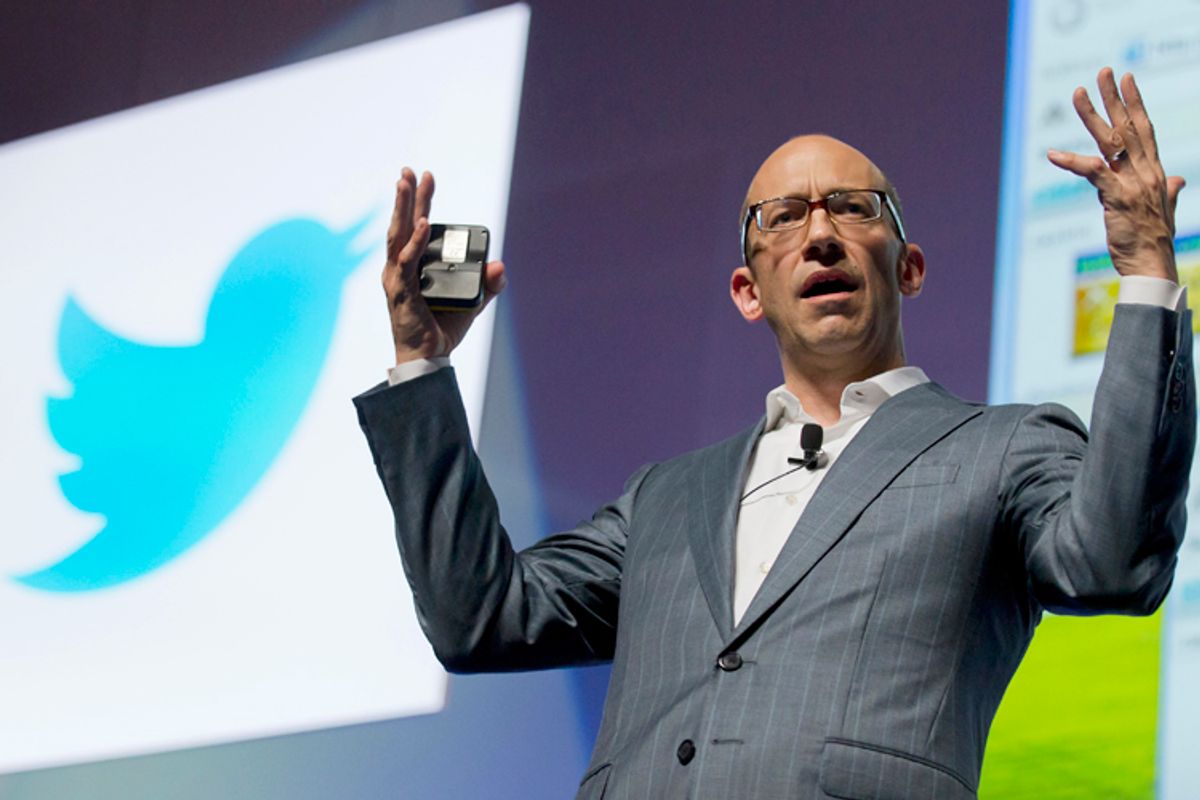 Earlier this month, Twitter CEO Dick Costolo admitted that his company had been ignoring its harassment problem for far too long. “We suck at dealing with abuse and trolls on the platform and we’ve sucked at it for years,” Costolo wrote in an internal memo. “It’s no secret and the rest of the world talks about it every day. We lose core user after core user by not addressing simple trolling issues that they face every day.”

In an interview published Wednesday by the New York Times, Costolo talked more about online abuse, though this time around he seemed a little less decisive about the nature of the problem.

"Well, it’s a complex issue," he said on the topic of Twitter's pattern of inaction when it comes to online harassment. "By way of example, in the wake of the news of that internal memo going out, I’ll get emails from people that say, 'I agree, and here’s a great example of someone being harassed on the platform' -- and it’s not at all harassment, it’s political discourse. And, in fact, fairly rational political discourse. So you know these things have lots and lots of varying degrees: Was that really harassment and abuse? Or is that discourse?"

The question is less confusing to the many women on Twitter who experience misogynistic, racist and transphobic harassment on a daily basis. Back in December, Lindy West wrote at the Daily Dot that Twitter was ignoring her reports of rape and death threats with some regularity. Her experience was far from unique.

After West reported a tweet that said, "CHOO CHOO MOTHERFUCKER THE RAPE TRAIN’S ON ITS WAY. NEXT STOP YOU,” Twitter sent her a message indicating that the tweet didn't violate its rules:

Thank you for letting us know about your issue. We've investigated the account and the Tweets reported as abusive behavior, and have found that it's currently not violating the Twitter Rules (twitter.com/rules).

Click those rules and this is what you find:

Users may not make direct, specific threats of violence against others, including threats against a person or group on the basis of race, ethnicity, national origin, religion, sexual orientation, gender, gender identity, age, or disability. Targeted abuse or harassment is also a violation of the Twitter Rules and Terms of Service.

Sending the "rape train" after a woman is absolutely a threat of violence, but Twitter didn't treat it that way. Which is perhaps why Costolo's comment to the Times feels so vexing. He admitted that Twitter "sucked" at handling abuse, but now seems to be saying that the reason it sucked for so long is that abuse is hard to sort out from "rational political discourse."

But clearly abuse remains a problem even when it is in blatant violation of Twitter's existing rules. This is one of the reasons I think that Twitter needed to, and still needs to, do a better job of accounting for what kind of inertia and internal priorities allowed the company to suck for so long at handling abuse:

Why did Twitter allow itself to suck so badly? Was it because the company was concerned that cracking down on the harassment of women, particularly women of color and trans women, would alienate a certain kind of white cis guy on Twitter whom it considered part of a more valuable consumer demographic? Was it because it understaffed and under-resourced the people responsible for fielding harassment reports and blocking serial offenders? Is it because it didn’t know how to recognize violent harassment even after it was reported? These aren’t insignificant questions, and will determine what will need to be changed in order to address the real problem.

Until Twitter gets honest about its problem -- and the reasons it failed to deal with it for so long -- we can expect the harassment to continue.