Wal-Mart killed my dream: I fled Saudi Arabia for this?

After my co-workers and I organized, Wal-Mart finally responded. But here's the sad reality of my life now 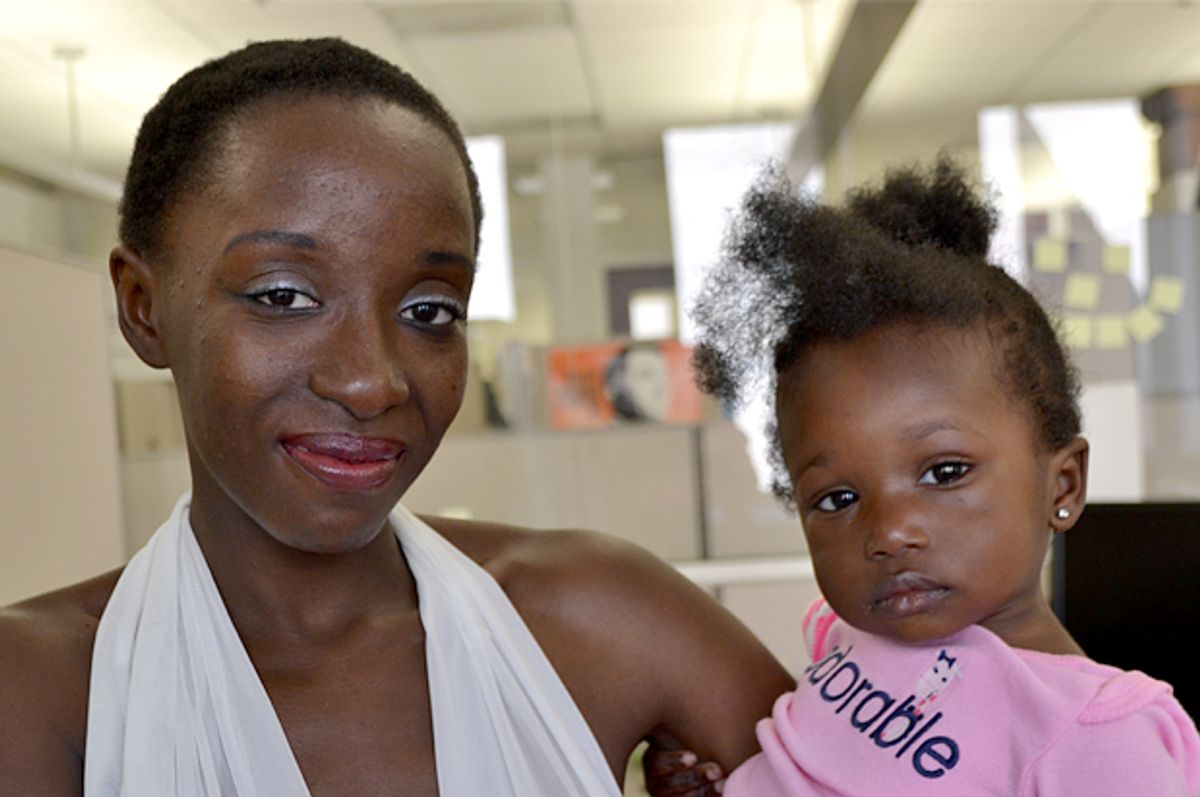 A photo of the author with her daughter
--

A 21-year-old cashier at the Wal-Mart store in Alexandria, Virginia, I was standing in line at the DMV excited to get my first driver’s license when I first heard that Wal-Mart announced a raise for half a million workers. On the plus side, the calls for change have finally gotten to Wal-Mart. Under pressure from workers, shoppers and tens of thousands of supporters, and after years of OUR Walmart members calling on the company to improve pay and scheduling, Wal-Mart announced that it was raising the minimum wage to $9 an hour this April and then to $10 an hour in 2016.  I was so proud that our strikes, our protests and our petitions had made a difference for hundreds of thousands of workers.

But on the other hand, $10 an hour? Does Wal-Mart really think this is enough to live on?

When I came to the United States, I was excited to start over in a place where women had the freedom to achieve their dreams and live the kind of life they wanted. I fled Saudi Arabia in fear when I became pregnant and came to the U.S. hoping to make a life for my new family. I was grateful to find a job at Wal-Mart. In Saudi Arabia, I didn’t have the opportunity to go to high school, so I looked forward to working, raising my children and pursuing my education.

I was on my way to the American dream.

But when I started at a Wal-Mart in Northern Virginia, I didn’t realize that my low wages, along with few and erratic hours, wouldn’t be enough to pay my bills. Even two raises later, I’m still making just $8.80 an hour as a cashier. I love working with customers, but my hours change so much that I’m forced to turn to the government to help me cover my rent and childcare for my two young children.

I want full-time hours and have asked many times for more, but my schedule remains all over the place and my hours are inconsistent. Some weeks I work 36 or 26 hours, while other weeks it is as few as 18, which means my take-home pay is less than $200 each week. With too few hours, I struggle to cover the basics, let alone diapers and clothes for my fast-growing toddlers.

In America, I knew I had the freedom to speak out for change. I knew that if enough of my co-workers and I spoke up, things would change. Wal-Mart’s recent announcement proves what happens when workers stick together and stand up for better jobs, even at the largest private employer in the country. With $16 billion in profits each year, everyone knows that Wal-Mart can afford to do better for all of its employees.

But while I am proud we got Wal-Mart to start to hear our voices, this can only be just the first step. This new wage still falls well short of what families need. When you’re looking at all of your bills – groceries, rent, electric and other basics -- $10 an hour is just not enough.  Ten dollars an hour for me means about $1,800 more each year before taxes. That helps, but it’s not enough to make a big difference in my kids’ lives.  Especially when we have no guarantee on hours and schedules.

I know that in America change is possible. My co-workers and I will keep fighting to win the $15 an hour and access to full-time hours that will really change our lives. When that happens, I will be able to stop worrying about how to afford dinner and diapers before the next paycheck, put my kids on a steady path to a better future and start thinking again about my own goals for school. But until then, let's be honest: I’m still fighting for my American dream.