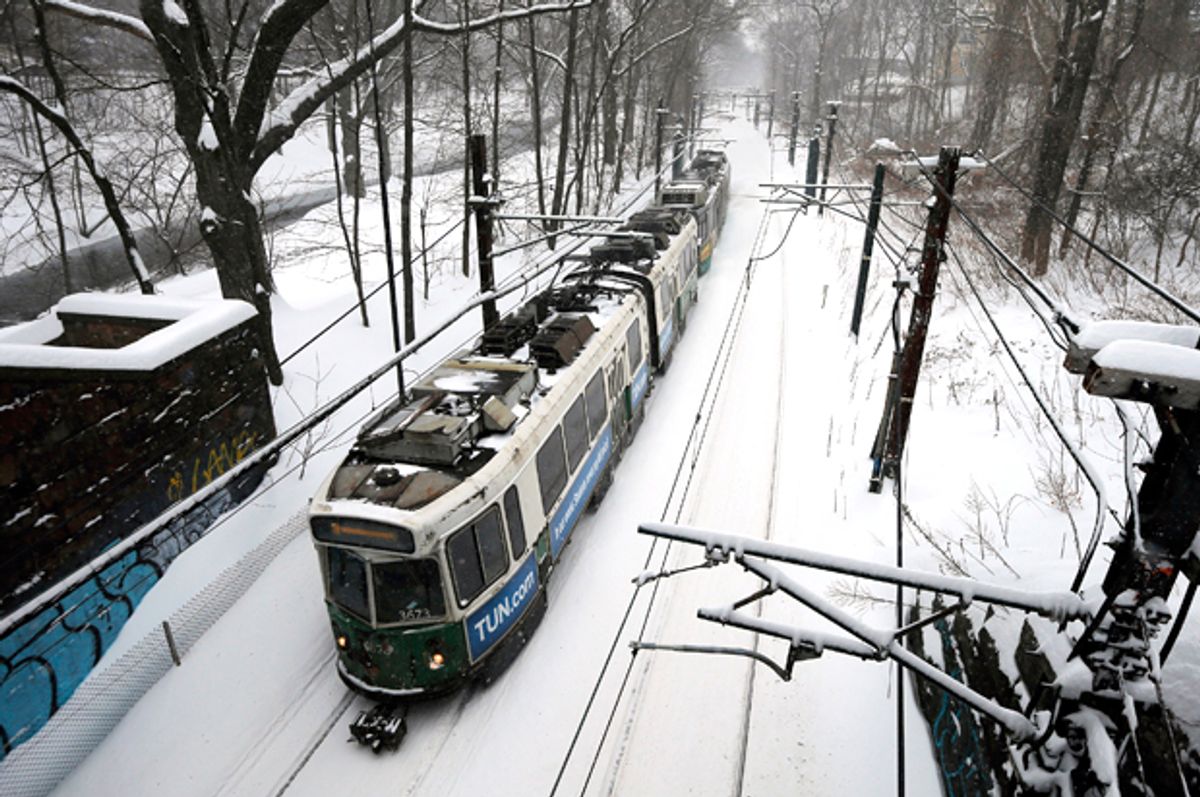 The great transit systems of the Eastern Seaboard are in crisis.

In New York, the Metropolitan Transit Authority is operating a subway system strained by record ridership and storm damage, where the increasing regular delays have been supplemented by a series of recent snafus that have stranded tens of thousands of New Yorkers. A meager capital funding plan is in limbo, threatening the progress of long-awaited projects like the Second Avenue Subway.

In Washington, ridership on Metrorail is down 11 percent since 2009. Mechanical failures smoked straphangers out of underground stations on three occasions… last weekend alone. In January, a third-rail malfunction near the National Mall caused a smoke-storm that killed one woman and sent 84 commuters to the hospital.

And in Boston, a record month of snow has spawned a transportation catastrophe with few modern equivalents. “It’s like a war, we’re taking this back station by station, line by line, switch by switch,” said T chief Beverly Scott. Some parts of the system were shut for days; replacement buses, when they ran at all, created block-long lines in the cold. The city’s tempo shifted into half-time.

These are, respectively, the largest, second-largest and fourth-largest rapid transit networks in the country. And despite their differences, they have a couple things in common. First, each of the three agencies shows a streak of incompetence that irritates and frightens commuters. Second, all three networks suffer from a worrisome lack of political and financial support.

As Boston’s recent debacle illustrates, it can be hard to sift the pebbles of internal mismanagement from the vast sands of disinvestment. Boston’s fleet is so old that many of its trains run on direct current (DC), which is more vulnerable to moisture than the alternating current used in more modern cars. The newest cars on Boston’s Red Line are older than the average car in New York City. That’s a big reason the T was totally incapacitated for 24 hours a couple weeks ago.

That’s a long-term problem, and responsibility for fixing it rests (largely) with the State of Massachusetts. But even under record-setting snow conditions, the lack of an effective emergency plan rankled stranded Bostonians.

In New York City, the editorial board of the Times wrote this week that New Yorkers could sense “a steady deterioration in the system.” On weekends, service is so removed from normal as to render subway maps obsolete. (On Saturday nights, we could use our own version of this map that journalist Sara Morrison devised for Boston.) By one measure, delays are up 50 percent year over year. In October, a contractor nearly sent a drill bit the size of a lamppost through the roof of a crowded express train in Queens.

We’ve learned to expect such things from our ancient and perennially underfunded subway. But the slow decline of its infrastructure doesn’t explain the MTA’s obscurantist approach to its own shortcomings. When things go wrong, the agency never effectively communicates the scope of the problem, leaving commuters to guess their best route home — or whether they should remain in the subway at all or try their luck above ground.

I’m always reminded of this state of affairs when a long-awaited train stalls “due to train traffic ahead of us.” The announcement, though made by a robot, is so plainly untrue that its broadcast to a captive audience is almost funny.

Of course, no transit agency incurs the wrath of its customers quite like WMATA, which runs, among other things, the Washington D.C. Metro. (Take a look at the Unsuck DC Metro Twitter for a good idea of WMATA’s relationship with its riders.) The system’s ever-broken escalators and frequent resort to single-tracking are popular subjects of complaint.

In short, all three systems are suffering from a dependability crisis. Particularly compared to counterparts in Europe and East Asia — and why shouldn’t we hold ourselves to global standards? -- they are unreliable and getting worse.

It’s hard to overstate how important this is. Bad transit doesn’t just upset people, or encourage them to drive. It saps a city’s economic vitality. It extends distances, pushing people away from their jobs, their friends and their families. These urban transit systems are literally invaluable, in the sense that it is impossible to measure the scope of their contribution to their various regions.

That’s why it’s so sad to see them slowly asphyxiated by shortsighted politicians. In Washington, the WMATA must ask for money from a half-dozen regional governments each year, a situation that begets instability and discourages political accountability. In Boston, decades of disinvestment are beginning to bear fruit. In New York, the future of the region is being jeopardized by, of all people, a Democratic governor from Queens.

The underfunding of infrastructure in the U.S. is a broader phenomenon than these three examples. But transit seems particularly vulnerable to political malfeasance. As it happens, Boston, New York and Washington have proverbial front-row seats to an impending transit disaster on the railroad that connects the three cities. The only question is what will break first: the decrepit, dangerous Baltimore and Potomac tunnel or the flood-rusted Hudson River Tunnels connecting New Jersey to Penn Station? Either one would spill chaos onto nearby highways and airports. But it might also be, as they say, a teachable moment.