Should Obama play a former boy band member on “Empire?" He would be in good company if he did

A look at some of our favorite TV cameos featuring politicians 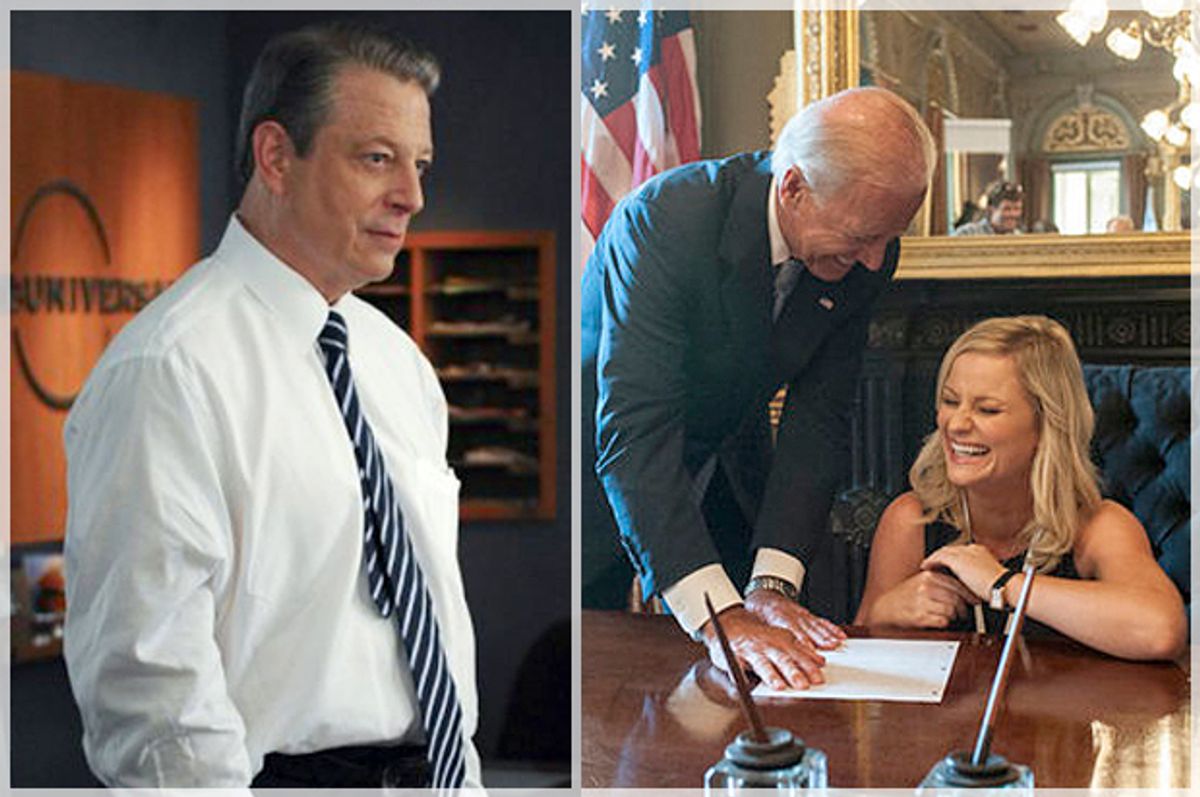 During a recent interview with Seth Meyers, "Empire" showrunner Lee Daniels said he’d love to have President Obama cameo on the show. However, he wouldn't have the President play himself; rather, Obama would appear as one "Teddy McFadden," a former boy band member and love interest for Taraji P. Henson's Cookie.

While that exact storyline might be a little farfetched, we welcome any opportunity for POTUS to show off his dramatic chops (remember how good he was on "Between Two Ferns?") Plus, when it comes to political figures appearing on TV, he's certainly in good company. While it’s not quite as common for a sitting president, many leading political figures have made appearances on TV's most popular shows over the years.

Here are some of the best political cameos on sitcoms and dramas (we’ve omitted talk shows and "Saturday Night Live," to keep things manageable).

Joe Biden on "Parks and Recreation"
"Parks" fans know much Leslie Knope worships Joe Biden -- as we know, her ideal man needs to have "the brains of George Clooney, with the body of Joe Biden" -- so we shared Leslie’s excitement when she finally came face to face with her number one crush in season five's "Leslie vs. April." It was super satisfying and heartwarming to see this running joke pay off, and Biden clearly enjoyed himself -- apparently he even ad-libbed a little bit.

Rudy Giuliani on "Seinfeld"
"The Non Fat Yogurt," in which David Dinkins loses the election to Giuliani after a frozen yogurt-naming fiasco, is not only a classic bit of Seinfeldian absurdism, it's also a remarkable little slice of New York history. The events of the episode happened pretty much concurrently with the 1993 NYC Mayoral election -- the election was on Tuesday and the episode aired Thursday -- and as the story has it, they shot two alternate versions of the episode just in case Giuliani lost.

Ed Koch on "Sex and the City"
The former mayor did a lot of TV and movie cameos, from "Spin City" to "The Muppets Take Manhattan," but we'll always remember his "SATC" guest spot, which features the perpetually good sport walking down a runway in a charity fashion show (unlike Carrie, he doesn’t miss a step).

Michael Bloomberg on "Curb Your Enthusiasm"
In perhaps his greatest Mayoral ban since he got rid of big sodas, Bloomberg banned Larry David from New York after Larry pretended to play violin during a Michael J. Fox speech. Bloomberg isn’t much of a thespian, but it's a fun premise and we get a kick out of seeing the clash of personalities between Bloomberg and David (side note -- as you may have noticed, sitcom cameos are one of the principal duties of the NYC mayoral gig). See the video here.

Al Gore on "30 Rock"
"30 Rock" has featured a lot of great political cameos (Condoleezza Rice as Jack's ex, for one) but our favorite might be Al Gore, who is a surprisingly great sport and does a brilliant caricature of himself. ("Quiet...a whale is in trouble. I have to go!")