With new arguments to decide Obamacare over, here's why Justices Roberts and Kennedy face the test of their lives 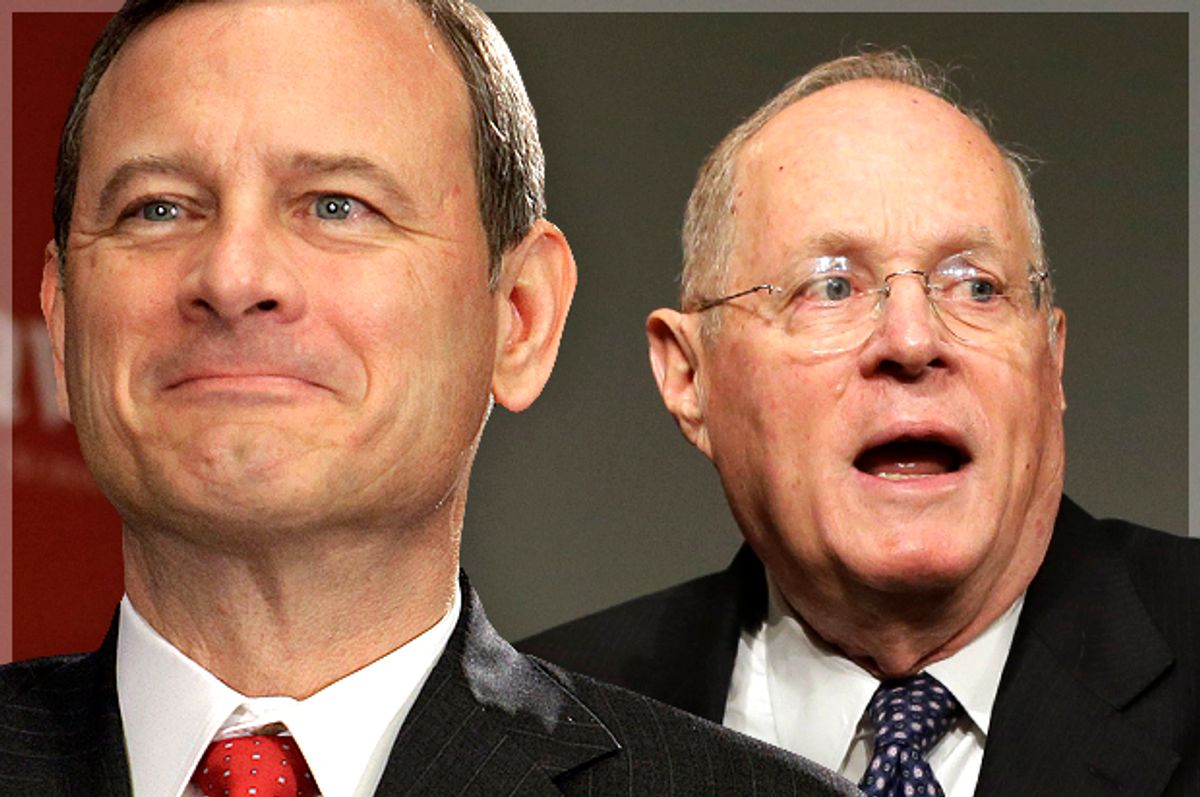 Well, it’s all over and done with. The arguments have been made, the cases have been laid out, and now all that’s left is for nine absurdly powerful unelected government officials to decide in private whether or not the Moops invaded Spain.

Oral arguments in King v. Burwell began and ended yesterday, and the Supreme Court will determine over the next few days whether the Affordable Care Act’s health insurance tax credits can be legally distributed in states that relied on the federal government to set up their insurance exchanges. The plaintiffs in this case argued vigorously that a hyper-literal interpretation of one short clause in the ACA should prevent those subsidies from going out, even though such an interpretation would put the law at war with itself and defeat its stated intention of making insurance affordable for all Americans.

The plaintiffs had sympathetic ears in at least two of the conservative justices: Antonin Scalia and Samuel Alito. (Clarence Thomas, as is his custom, remained silent during the oral arguments, but his opinion of the ACA is no secret.) Scalia in particular was enthusiastic to see the law blown up from within, regardless of what Congress intended or what the rest of the law says. “I mean, is it not the case,” he said at one point, “that if the only reasonable interpretation of a particular provision produces disastrous consequences in the rest of the statute, it nonetheless means what it says.” The answer may be “Moors,” but the card clearly says “Moops.”

The liberal justices did an effective job of tearing down the plaintiff’s arguments – Elana Kagan offered a great deconstruction of the petitioners’ case that put the plaintiff’s lawyer, Michael Carvin, in such an awkward spot that Alito had to come to his rescue. But what mattered most were the comments from the two justices broadly viewed as the “swing” votes in this case: Chief Justice John Roberts and Anthony Kennedy. Roberts didn’t say a whole lot and left people guessing as to what he’s thinking, but Kennedy was quite voluble, and what he said left liberals feeling confident and conservatives noticeably deflated.

For Kennedy, one the biggest issues confronting the justices in this case is state sovereignty. King v. Burwell does not pose a constitutional challenge to the Affordable Care Act, it simply seeks to have the text of the statue interpreted in a very narrow and outlandish way. Kennedy raised the possibility that interpreting the statute in accordance with the plaintiff’s argument would actually serve to create a constitutional crisis by coercing the states into acting to set up their own insurance exchanges.

“Let me say that from the standpoint of the dynamics of federalism, it does seem to me that there is something very powerful to the point that if your argument is accepted, the states are being told either to create your own exchange, or we’ll send you into a death spiral,” Kennedy said to Michael Carvin. “It seems to me that under your argument, perhaps you will prevail in the plain words of the statute, there’s a serious constitutional problem if we adopt your argument.”

Solicitor general Don Verrilli, arguing the case for the government, picked up the federalism ball and ran with it. “So, Justice Kennedy, I think the federalism values are promoted by our interpretation,” he said. “The structure of the act that Congress put in place and that we’re advocating for today fully vindicates that concern.”

And with that, every liberal in the land gave three cheers for states’ rights, while conservatives rued the constitutional protections against an overly coercive federal government.

Trying to figure out how the justices will rule based on their remarks during oral arguments is a dangerous pursuit, but if you’re looking for a basic lay of the land, it feels safe to say that there are three obvious votes against the Affordable Care Act (Scalia, Thomas, Alito), four obvious votes in favor (Kagan, Breyer, Ginsburg, Sotomayor), and two question marks in Kennedy and Roberts. Bloomberg View columnist Noah Feldman made the interesting argument that Kennedy, in pursuing the federalism angle so enthusiastically, was actually pressuring Roberts to be the one to vote to in favor of the ACA. It was Roberts who used the coercion argument to defang the ACA’s Medicaid expansion back in 2012, and Kennedy may have been unsubtly reminding him that this is his principle to stand on.

That, of course, assumes that the conservative justices will care about principle more than they do about destroying the Affordable Care Act. Either way, we’re in the thoroughly depressing situation in which the health insurance of millions of Americans depends on whether Anthony Kennedy and John Roberts can work out amongst themselves who will be the one to “betray” conservatives by adhering to principle and common sense and voting to protect the Affordable Care Act.