"Why is it so hard to see black and blue?": Salvation Army turns #TheDress into a powerful anti-domestic violence message

Which makes people more squeamish: capitalizing on an Internet meme, or highlighting the reality of abuse? 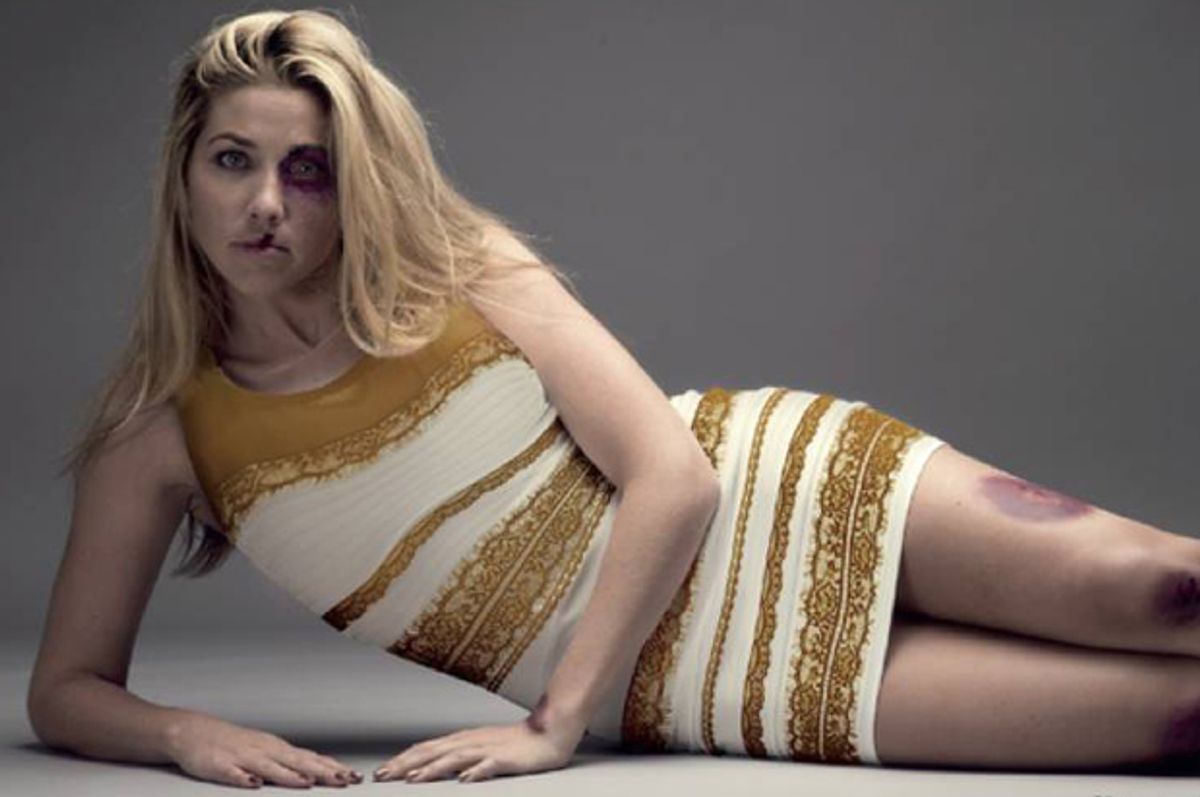 The dress that broke the Internet last week is back -- but this time it might actually do some good, instead of tearing apart social media (and some families). On Friday, the Salvation Army of South Africa released a powerful new ad in advance of International Women's Day, using #TheDress to highlight the insidious problem of domestic violence.

The jarring ad shows a woman in the mythical white-and-gold version of the now infamous Roman Originals dress, but that's not the only thing that covers her: She is also abundantly bruised, cut and scraped, with violet welts on her thighs and knees and a massive black eye. She stares directly into the camera, her defiance in stark juxtaposition to her horrific battery, and appears alongside the question: "Why is it so hard to see black and blue?"

"The only illusion is if you think it was her choice," the ad reads. "One in 6 women are victims of abuse. Stop abuse against women."

The ad is clever, to the point that it almost seems like a manipulation or perversion of the message in order to capitalize on a weird viral Internet moment. But isn't that what all advertising is in the first place? Does it really matter how Salvation Army, or any anti-violence advocate, manages to get our attention when the message is that domestic abuse and violence against women are never acceptable, but common and often ignored?

The short answer is yes, but in this case it seems the cleverness might be appropriate. It's similar to the Cover Girl ads doctored to show models with black eyes and bloody lips that circulated in the wake of Ray Rice's suspension from the NFL for domestic violence last year. Unlike those unofficial advertisements, however, the Salvation Army ad is sponsored by a well-known organization speaking out for survivors.

Their effort is valuable, and it works -- and it makes a point that can't be made often enough. Not only is domestic violence appallingly common, it is so often followed up by questions of "why she stayed" and misconceptions of how entangled, abusive relationships work. As the ad notes, the only "illusion" is of choice or power or ease; and as with the actual dress, the reality is black and blue. It's up to us to choose to see it that way.