"You have to engage with the Bible a little bit": Arcade Fire's Will Butler goes back to his roots for his first solo album 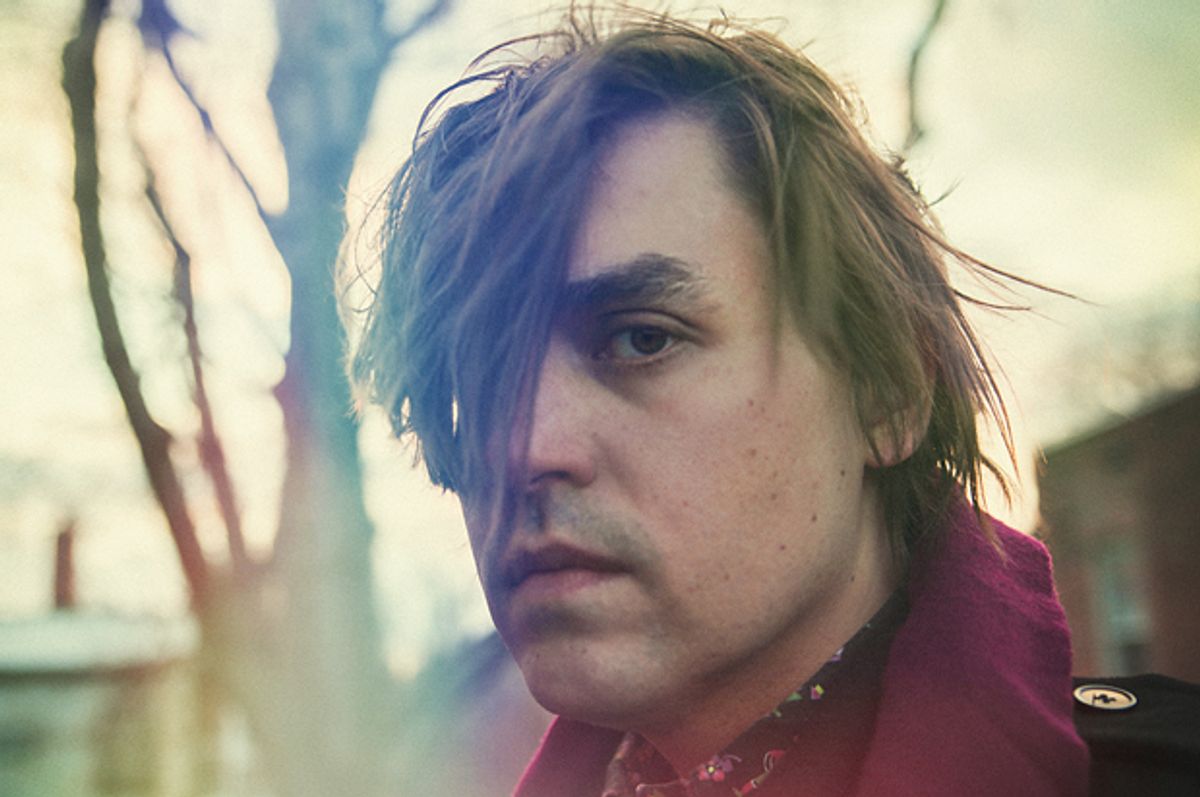 Will Butler may not be the most recognizable Butler in Arcade Fire, but with an Oscar nomination under his belt (for the score to Spike Jonze's "Her") and now a new solo album, he's poised to step out from under big brother and Arcade Fire frontman Win's wing. Butler has been a member of the Grammy-winning indie rock group for more than 10 years, helping bring the complex, multi-layered sound of albums like "Funeral" and "The Suburbs" to life, playing everything from synthesizer to bass, guitar and drums (when he’s not lobbing them at the lights dangling high above the stage). Needless to say, he’s also earned a reputation for his wild and occasionally jaw-dropping onstage antics.

Arcade Fire is pretty much the only band that Butler has ever been in, so it understandably took awhile to work up the nerve to release an album under his own name. On March 10, Butler’s debut solo album "Policy" comes out on Merge Records. Its eight tracks, most of which were recorded at New York’s famed Electric Lady Studios, are filled with an all-American rock vibe that manages to reference the Arcade Fire sound, while actually sounding nothing like it. It’s a neat trick built on barbed guitar riffs, rumbling rhythms and the occasional woodwind. It’s sure to both appeal to and challenge Arcade Fire fans, while bringing in a whole new audience of listeners raised on the jangly rock of The Modern Lovers or R.E.M.

Before his tour kicked off, Salon talked to Butler about going solo, the value of iPhone notes, and making an album in a week, flat.

What’s it like hitting the road alone after touring with Arcade Fire for so many years?

The difference is that I’m playing songs no one has heard to an audience that doesn’t know what to expect. That’s more the difference than the number of people on stage. It’s exhilarating. I’ve played so many shows in the last 10 years that any kind of show feels normal, but playing stuff that no one has any idea what it is is pretty different. It’s like the good old days!

How do you get the audience on your side?

Why a solo album now?

I’d always had it in the back of my head to do something at some point. I think the Oscar nomination was the final push. That was work I did with the whole band — everyone worked on that soundtrack, but Owen [Pallett, who also plays in Arcade Fire] and I got the nomination. That wasn’t crazy, though, because I directed the whole project. But after that I was like, my name is attached to this, I should attach it to something I did myself. It kind of felt like there was a public data point about me, but all people knew about me was the very lovely piano score for a very quiet film -- and now I can surprise them. I felt like I could be surprising.

When did you write all these songs? Have you been collecting them over the years or are they all recent?

Three and a half of them were done in the last couple of years. They were already done when I booked the session. Another few I wrote knowing that I had a session booked in the studio. “Anna” was done in the studio and “Something’s Coming” is actually an outtake from a soundtrack that Jeremy Gara and Tim Kingsbury [other members of Arcade Fire] and I did for a Marcel Dzama art film. [The film is "Une Danse des Bouffons" ("The Jester's Dance").]

Who is Anna, this character you’ve created?

It’s someone you’re trying to give advice to, but you suspect they are more competent than you.

It depends on how you feel about money. [Laughs] We wrote it in the studio, because we had an extra day. We had the studio for a week and Jeremy Gara for four days and we essentially finished all the drums on all the other songs and we had Jeremy for another six hours, so I said "Let’s do this song!" I played a few bars, we did a slow take, we did a fast take and we used the fast take. It was based on an iPhone recording of a song that I had written.

Do you do a lot of iPhone recordings?

Kind of. It’s very handy, because it’s always there. You can just whistle something into it while you are walking down the street. Sometimes you are sitting at the piano and can record something really easily.

How many music notes do you have on your phone?

Well, I never delete any of them, so there are hundreds of them at this point. But there are also grocery lists and things that I think are funny sounding in the mix. Sometimes there will be 12 takes of a song if I’m trying to get something right. I think there are something like 25 recordings of “Witness”! I’ll just grab my phone and try again until it’s right.

How do your songs come together? Lyrics then music or vice versa?

On this album I really wanted a concept of everything I recorded before I went into the studio, but nothing was written out or anything. I knew I wanted — both for time and philosophy — for it to be fairly simple: drums, bass, guitar and piano or some combination of that. In the studio, the first four days were doing drums, bass, guitar and piano. The last three days were backing vocals, clarinet.

How has Arcade Fire influenced your solo work? Some artists might try to do something dramatically different like a metal album, but this seems to come from a similar place.

How quickly did you make the album?

The main recording was done in a week. And then one week in Montreal to mix and do some vocal takes.

Are you normally that efficient?

Not with Arcade Fire. I think that was the thing that was reactionary to Arcade Fire. Arcade Fire is very exploratory in the studio. I wanted to just go in, put down some songs, and walk out.

Now that you know how quickly you can make an album, are the floodgates open and you are going to record one a year?

It depends. I knew I had time this year and I had songs this year, so I wanted to do it now. If I have time and songs, sure, why not? Maybe every 18 months, not every year.

Now that you know you can make a solo album, are you going to keep doing it?

I don’t see it as independent from the other things I do. It’s tied up with Arcade Fire and having a family and all different aspects of work I am doing. It’s not on a separate parallel track. For now, anyway, maybe it will take on a life of its own. If Arcade Fire geared up tomorrow, I would be like, "Amazing! Arcade Fire! Totally satisfying. Let’s do it."

There are a lot of religious references in your songs. Are you a religious person or do you like the imagery?

Both. It’s just so tied to my heritage and the heritage of American music that I feel like you have to engage with the Bible a little bit.

The song “Something’s Coming” is a very dark song, and you said it’s from a soundtrack a Marcel Dzama film?

It was written for Kim Gordon to sing on, because she was starring in the Dzama film, but he got too scared to ask her, so I put a vocal on it.

Kim Gordon was on set and he was still too scared to ask her to sing the song?

Yeah, he was like, "she had already agreed to do my weirdo art film; I’m one-for-one, I’m feeling great, I’m not pressing my luck!" Later when he mentioned it, she was like "that would have been great! I totally would have done that." Basically he was being too nice, because he’s Canadian.

Your wife sings backup on some of the tracks and a lot of your friends are involved with this project and you’re in Arcade Fire with your brother. Is music an extension of family for you?

Arcade Fire has such a large, warm network. The woodwinds on the album are from the guys we were touring with. You live in a tiny bus with someone for enough weeks and you become pretty close.

Coming off an Oscar nod, you must be in high demand as a film composer. Are you working on anything?

Not currently. I’m not opposed to it, but it takes as much work as anything, and you have less creative control. You have to be in the right mood and the right space artistically, where you can devote time to it, but you’re willing to be a little frustrated artistically.

So it’s not as much fun as making an album?

It’s easier in some ways, because you don’t have the final responsibility for the project, but that can also be hard. It’s very different.

What were you listening to while you made this album?

I was listening to a lot of podcasts. Hardcore History, some of the Marc Maron stuff. I try to cycle through things like popular nonfiction to a classic to a normal fiction. I try to mix it up some. I might have been reading Yeats, but that’s apocryphal. I have no data to back that up.

So no think-pieces relating your lyrics to Yeats?

You could write a fine think-piece, maybe a great one, but it would be on thin ice.