"It’s not about the sex": The case for open relationships

Infidelity is condemned as selfish, while monogamy is celebrated. But what's so great about living in self-denial? 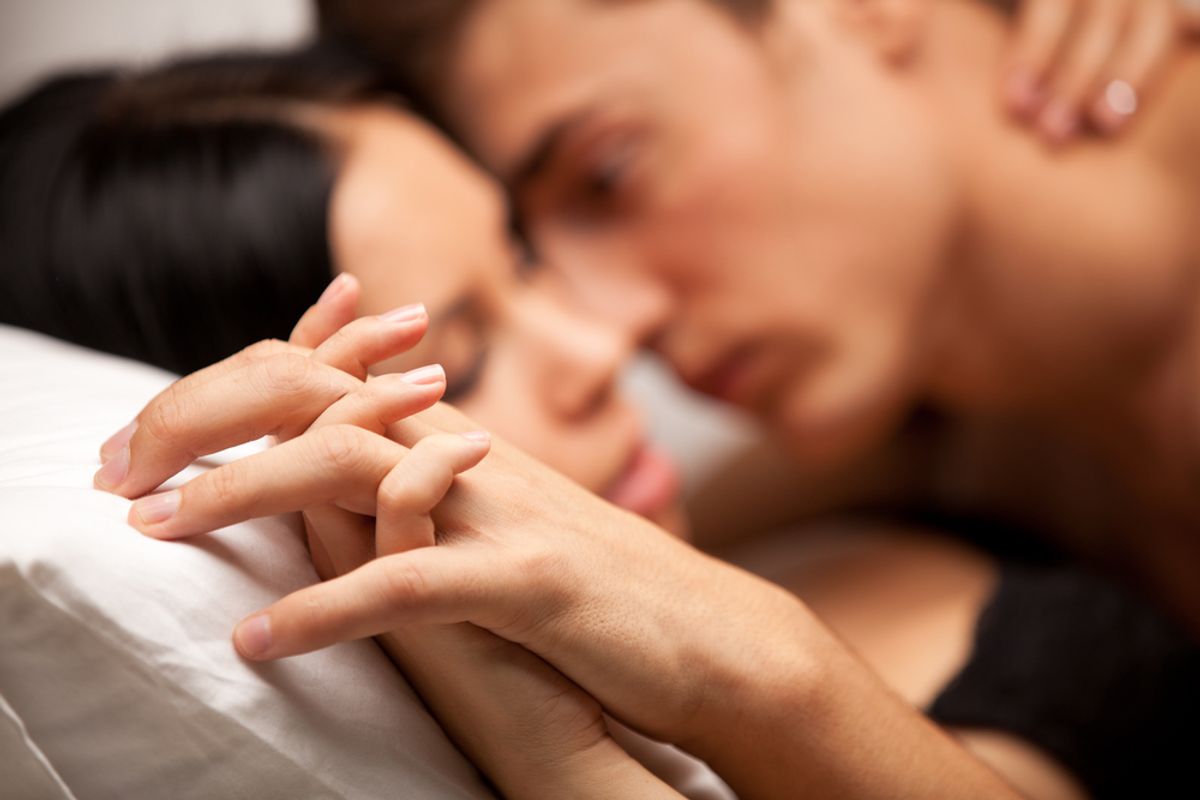 When my boyfriend, Jason, confessed to having sex with another woman, I cried. I cried almost nonstop for a full weekend, actually, in spite of the fact that I was the one who encouraged him to do it.

For the first two years of our relationship, I constantly teased Jason with dares that he fool around with any girl who hit on him. I maintained that I didn’t feel comfortable demanding monogamy, and that if he wanted to have sex with someone else, all I asked was that he be honest with me about it.

But Jason repeatedly said he was naturally monogamous. He didn’t like one-night stands—he was picky and prone to germophobia—and he didn’t want to have an ongoing sexual relationship with anyone else while we were together. He was a serial monogamist; he’d never had a “friend with benefits.” If he was having sex with someone, it was because they were dating.

Yet after years of being together, we hit a sexual wall. We’d tried meeting other couples and had two threesomes, but our efforts only yielded frustration and disappointment. I missed my days of effortlessly falling into bed with a new man and letting our chemistry lead the way. And I missed having dirty details to share with Jason about my past exploits (which he always enjoyed hearing). Together we decided that I would seek out another man, and though Jason would not necessarily look for another partner, he had license to seize the opportunity should it arise. That opportunity arose during a trip to New York, when a waitress gave him her phone number.

Although open relationships are not as shocking a concept today as they were 50 years ago, they’re still regarded with overwhelming skepticism and even disdain. The usual assumption is that polyamorous people are selfish, immature, incapable of commitment, and their primary relationship is therefore doomed to failure. When a letter writer asked Psychology Today columnist Hara Estroff Marano whether an open marriage might work for the writer and his/her partner—explaining that each had affairs in the past but still “remain committed to each other”— Marano (who is not actually a psychologist), replied "no." She went on to accuse the letter writer of being in search of “Peter Pan escape(s),” closing with the snide line that staying in a monogamous marriage “takes guts; it’s much easier to look outside for excitement than to find the source within.”

But what’s so gutsy about living a life full of self-denial and insecurity, where the person you love most is also the person you most need to limit?

Janet W. Hardy, co-author of The Ethical Slut, is quick to point out that being “open” is not necessarily the path of least resistance, and that moving away from monogamy takes courage: “The difference between polyamorous people and monogamous people isn't that poly people never feel jealous -- we do. The real difference is what we do with our feelings of jealousy. […] By blaming the [unhappy] feelings on their partners, [most monogamous people] are able to make problems someone else's fault. That way, they don't have to feel responsible for figuring out what's causing the feelings, or for finding a solution.” Those who have elected to allow their partner extra-relationship sex don’t “have that luxury. You don't get to distract yourself from your feelings of loss, sorrow, insecurity or whatever by diverting them into anger toward him [or her.]”

This is part of why an open relationship can be such a challenge. In an article that came out earlier this year about one couple’s history of their open marriage, wife Cate specifically said “it seemed worth it to me to push my psychological limits, to just work through it. I wanted to get to a better self […] There were a million -- not a million, but many -- painful challenges. Enormous, terrifying. But if you have relationships that have real emotional depth to them, which is what we aspire to, then it is never safe. You're terrified about losing the person. It's high risk.”

Is that the thought process of someone who’s cowardly, careless or motivated only by hedonism?

I found out about such powerful psychological effects firsthand. My logical side was appalled by my crying—I was going to have other partners, too!—but my ego was screaming for comfort. My own experiences in the past had proven to me that I could have orgasms with men I wasn’t interested in dating; I could have good sexual chemistry with men who were not conventionally attractive; and I could even have a positive sexual encounter with someone without craving a repeat. I knew Jason had practiced safer sex and I knew that he loved me. There was no threat to my safety and no betrayal of trust. So why was I suffering so much? Probably because Jason’s news forced me to confront the way I perceived myself (impervious, rational, independent) versus the reality of how I actually am (insecure, emotional).

Janet Hardy puts this suffering in a positive light, by calling it “a gift, although it doesn't feel like one. It means that you get to make yourself stronger by figuring out what it was that triggered your jealousy, and working to solve it.” And that’s what I started to do. As I searched for a word to describe my internal experience, only one came up: humiliated. This was not a sensation I’d dealt with much. It was hardly a word in my vocabulary. But Jason’s affair had unleashed a slew of overwhelming insecurities—that I’m not sexy enough or pretty enough or satisfying enough—that left me vulnerable and exposed.

Therapist Esther Perel, author of Mating in Captivity, recognizes the volatility of such personal fears by encouraging the couples she sees to “find out where sexual exclusiveness begins or ends. When do you feel that boundaries have been stretched too thin and therefore the relationship is being threatened?” In my situation, it was less that I felt my relationship with Jason was threatened and more that I felt my own confidence, or rather my relationship with myself, was threatened. What I doubted was not his love of me but my own desirability and my worthiness to be loved. Personal issues that powerful wouldn’t disappear simply by requiring complete monogamy.

Furthermore, as Perel sees it, the distinction between monogamy and non-monogamy is erroneous. For her, “sexual exclusivity” and “fidelity” are more useful terms. “Fidelity is a relational constancy,” she explains. “A foundational respect, a pact, that may or may not include [sexual] exclusivity. Gay people have forever negotiated a monogamous relationship with a primary emotional commitment to one partner, with a deep sense of loyalty and devotion, that wasn’t necessarily sexually exclusive.”

Recent studies back her up. Although some estimates as to how many adults maintain open relationships are shockingly low (WebMD features two guesses that range from 4-9 percent to “less than 1 percent”) a study conducted by San Francisco State University found that 50 percent of gay couples were having sex outside the relationship with their partners’ consent. This circumstance seemed to have no effect on the couples’ happiness within their relationships when compared to the satisfaction of non-open gay couples.

Sadly, therapists as open-minded as Perel are hard to come by. David J. Ley, clinical psychologist and author of the amusingly titled Insatiable Wives, recently called out other therapists for being judgmental and hypocritical in their routine dismissal of alternative relationships. According to Ley, most counselors don’t receive enough instruction in human sexuality, and they fall back on cultural and personal biases in the absence of training. Just weeks ago in the Chicago Tribune, much-loved Dr. Ruth answered a female advice seeker who said she trusted her husband deeply and wanted to bring a third party into their relationship with: “Don't put [your marriage] at risk by having sex outside the marriage, in any form.”

Jenny Block, author of Open: Love, Sex, and Life In An Open Marriage, doesn’t understand why an open relationship would seem more risky than a closed one when 50 percent of marriages already end in divorce. “Relationships are hard no matter what the set-up. Sometimes I think open ones have a better shot because they are (or at least the good ones are) steeped in honesty.” She is also a strong believer that no one should define themselves by their relationships. “Relationships don’t complete me. They complement me and I hope my partners feel they can say the same. Relationships should be about flexibility, not rigidity. They should be about love, not ownership.”

The dominant school of thought among journalists, therapists and the general public is that romantic relationships require a renunciation of desire in order to succeed, or at least a severe restriction of desire. “Self-sacrifice” comes up often, but rarely the question of why you want someone you’re in love with to make such sacrifices, or the possibility of long-term resentment and unhappiness if you yourself sacrifice too much. Desire, even when unconsummated, makes many of us feel vibrant and alive, more awake to the world around us.

Along with this assumption regarding self-control or self-discipline is the strange refusal to admit that most romantic relationships are not life-long or even decade-long; that marriages fall apart and true loves grow distant; that people staying in a marriage is not synonymous with being happy. As Sandra Tsing Loh so controversially pointed out, there comes a point where someone may choose not to “work on” falling back in love—but some of those people separate and others stay together. The assumption when an open couple breaks up is that their poly lifestyle destroyed an otherwise tenable relationship. I find myself wondering if open couples are not simply more honest about what they want and need, and unwilling to stay in a relationship that isn’t functioning. Of course, amid all this speculation is the proverbial elephant in the room whenever polyamory is discussed: the fact that so many “monogamous” individuals have extra-relationship sex anyway.

When it comes to open relationships, Esther Perel is pragmatic: “It’s not for everybody. But neither is closed. Neither is the traditional model.” She adds that, contrary to being irresponsible and greedy, “people who try out [an open] model are often people who are very respectful of the other person’s sexual exploration. Or there are couples that are hoping that by creating a different kind of boundary they have a higher chance to survive and to preserve themselves. It’s [a decision] made for the purpose of the couple lasting.”

Jason and I are still together. We’re still learning about our boundaries, each other, and ourselves. We’re not actively pursuing other partners, but we also haven’t ruled out the possibility that we may in the future. I hope and suspect that if our relationship comes to an end, it will be the result of sincere self-reflection and honest assessment, not a blowup over sexual attraction to another person or a perceived sexual betrayal. Jason’s affair in New York taught me that our relationship is durable, that I can be strong even while hurt, and that if two people are honest with one another, most situations become less scary. As Jenny Block says, “Ultimately, it’s not about the sex. It’s about honesty, trust, love and respect. If you have those, you have no cause for concern.”