"Which side are you on?": #Asians4BlackLives confronts anti-black prejudice in Asian communities

As some Asians condemn Officer Liang's indictment in the shooting of a black man, #Asians4BlackLives calls foul 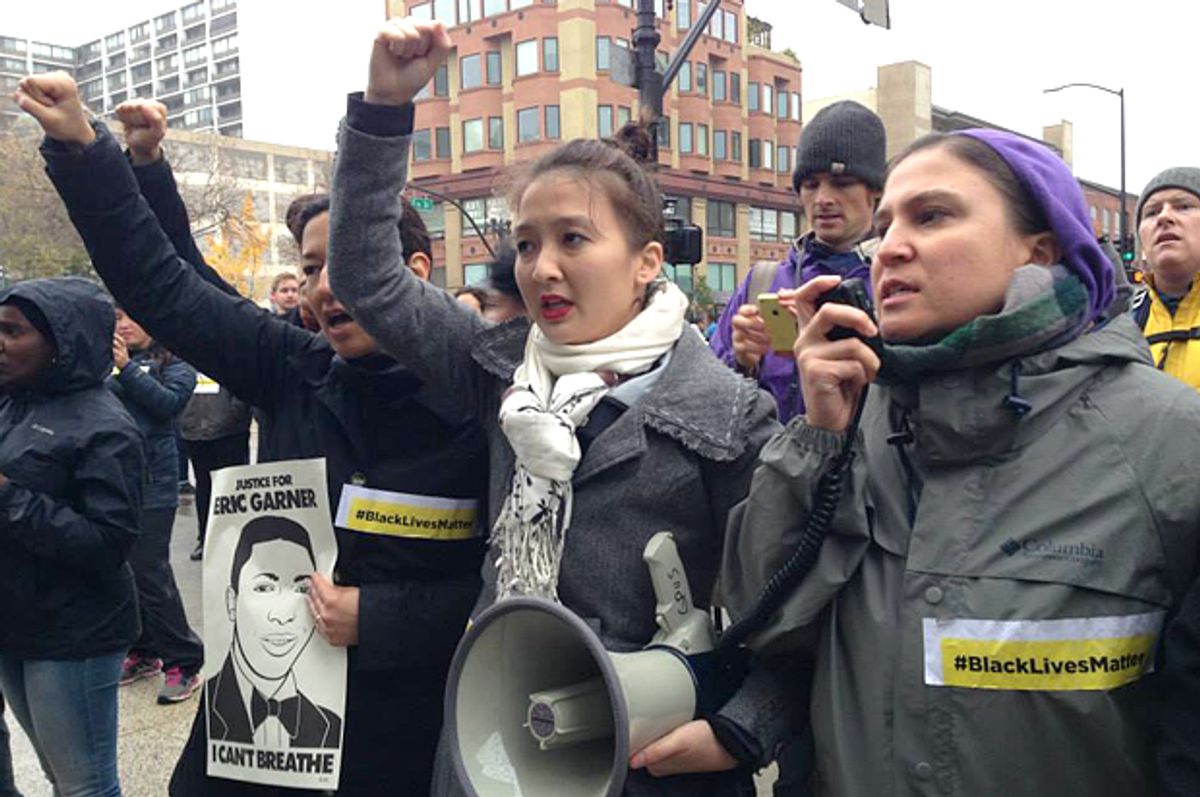 Little red envelopes are ubiquitous in Asian communities during Lunar New Year. Often stuffed with a crisp dollar bill or two, the envelopes are exchanged between family members, friends and neighbors with wishes for good fortune and health in the new year. This Saturday, as tens of thousands of people crowd San Francisco’s streets for its annual Chinese New Year parade, a group of Asian-American activists will be handing out a special kind of red envelopes bearing a special message: that Asian-American communities should join the #BlackLivesMatter movement.

“We want to use this time when we are all celebrating and sharing wishes for a prosperous new year to lift up the message that the black community also deserves a safe and prosperous year,” says Jennifer Phung, an activist from Oakland, California.

Phung is a member of the group #Asians4BlackLives, which will be handing out the envelopes. Each envelope will contain a card reading, in part, “As Asian Americans, we enjoy many rights that were fought for and won by Black liberation movements. Today, we too have the power to stand on the side of justice. We can create harmony by building strong relationships between Black and Asian communities and standing together for Black Lives. Which side are you on?”

#Asians4BlackLives was formed late last year, in the wake of the non-indictments of the police officers who killed Michael Brown and Eric Garner. The group’s first action was participating in a shutdown of the Oakland Police Department’s headquarters by chaining themselves to the main door of the building while holding a banner reading, “End the war on black people #Asians4BlackLives.” Members of the group have also taken part in civil disobedience protests at the Federal Building in Oakland and at a Bay Area Home Depot where a black woman allegedly shoplifted before being shot and killed by police from Emeryville, California.

By participating in the #BlackLivesMatter movement specifically as Asian Americans, the group has tried to put forward a model of black-Asian solidarity that runs counter to the “model minority myth” that has served to separate the two groups for decades. (As I’ve written in the past, the model minority myth is a tool of racism that uses Asian American success to disprove the existence of racism against African-Americans.) But in turning from protests against police brutality to outreach at the Chinese New Year parade, #Asians4BlackLives is refocusing its energies on confronting the ongoing existence of anti-black prejudice within many Asian immigrant communities.

The presence of resentment, distrust and intolerance between two different groups that are both struggling to succeed in the white-dominated United States is no secret. Tensions between Korean American shopkeepers and African-Americans were put on national display during the Los Angeles Riots in 1992, and in many Asian communities, anti-black sentiment goes unquestioned and unchecked.  The recent indictment of Chinese-American New York City police officer Peter Liang for shooting and killing an unnamed black man, Akai Gurley, in the staircase of a housing project last November, is a stark calling of the question that #Asians4BlackLives is putting forward: “Which side are you on?”

A WhiteHouse.gov petition demanding the withdrawal of Liang’s indictment has garnered more than 120,000 signatures. The petition claims that it is unfair for an Asian American police officer to be indicted when the white police officers in Michael Brown’s and Eric Garner’s cases went free and claims that Liang is being used as a “scapegoat” and was indicted for “political gain.” In a report on the reaction to the indictment by the Chinese community in New York, the New York Times spoke to several community leaders who were rallying behind Liang and his family. One supporter, Doug Lee, told the Times, “This is a vicious attack on the family, and this is a vicious attack on the Chinese community.”

Still, others in Asian American communities and across the country are resisting this analysis. CAAAV Organizing Asian Communities, a grass roots organization in New York City that was founded in the 1980s as the Committee Against Anti-Asian Violence, has been active in supporting Akai Gurley’s family and condemning police violence, no matter the race or ethnicity of the police officer involved. The group commended Liang’s indictment and has called on Asian Americans to do so as well. In a statement, the group writes, “The fact that Officer Liang is an Asian American shouldn’t mean that Asian Americans don’t call for justice for Akai Gurley. Quite the opposite — it should force us to examine how each of us is complicit in maintaining the status quo.” In an article at Talking Points Memo, writer and CAAAV board member Esther Wang argued that support of Liang is “hypocritical,” writing: “We can’t call for justice when an Asian person is harassed, targeted or killed by the police and then act to protect an Asian police officer when they’re the ones who’ve killed.”

That’s the message Phung and her fellow activists will be trying to share on Saturday, as San Francisco rings in the Year of the Ram. “Rams put their hooves down on unjust things,” says Phung. “As Asian Americans, we have the power and responsibility to stand on the side of justice.”