Chris Hemsworth comes out of his shell: How "SNL" humanized our dullest superhero

The "Thor" star was a surprisingly charming and funny host 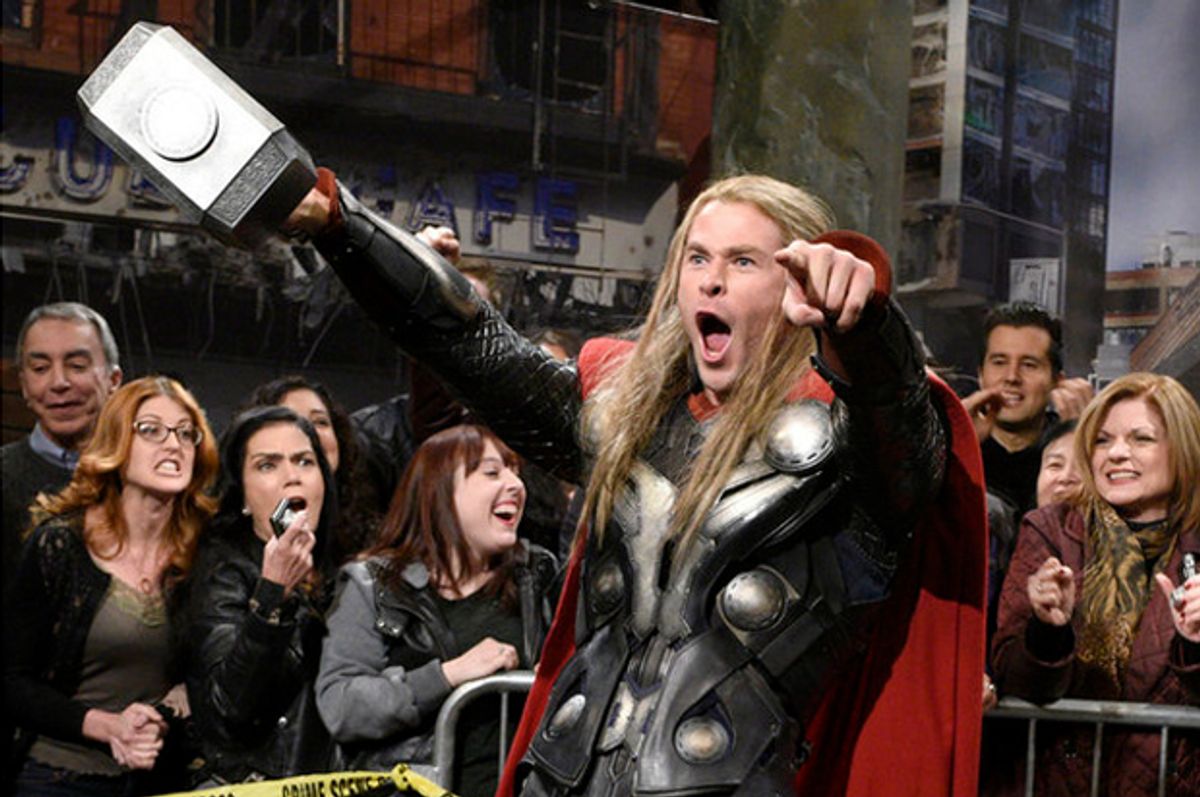 If this week's "Saturday Night Live" accomplished one thing, it's this: In the eternal struggle to decipher Which Chris is Which, I think I am finally going to be able to pick Chris Hemsworth out of a red carpet lineup.

Vulture recently wrote of the awareness crisis facing contemporary action heroes, pointing out that despite being in some of the biggest franchises of the decade (“Thor" and “Avengers”), Chris Hemsworth’s awareness score is remarkably low (Captain America Chris Evans, Superman Henry Cavill and former Spider-Man Andrew Garfield also fared similarly poorly by these metrics). As Buchanan put it, Hemsworth ranked among “the lowest awareness scores of anyone on our entire list, according to a statistic furnished to us by nationwide surveying company E-Score.”

Buchanan points to a number of reasons for this, from the over-saturation of the comic book market to the expendability of actors over the course of any given franchise. But mostly, it’s because many superhero roles — especially the more traditionally macho and humorless characters like Thor, Superman and Captain America — provide very little opportunity to let the actor’s relatability and humanity shine through. Unlike Robert Downey Jr.'s Iron Man or Chris Pratt’s Star-Lord, which are very much roles built around the actors’ quirks and eccentricities, the necessary features of a Cap or a Thor are little more than strong jawlines and unimpeachable gravitas. These films really aren’t about the man wearing the cape, but about the larger-than-life characters and the franchises they embody. And Thor might be the least approachable of the bunch, with Hemsworth being given little opportunity to transcend his Asgardian hunk facade and endear himself personally to audiences.

Which is why Hemsworth’s "SNL" appearance this weekend was such such a delight. After a few minutes, my perception of him had totally changed — from a bland, interchangeable Sexiest Man Alive centerfold to a guy I’d love to have some Arvo brews with (did you guys know Hemsworth has an Aussie accent? The more you know!) Throughout the episode, Hemsworth appeared energetic and giddy, brimming with upbeat energy and fully committing, no matter the material (and doing a much better job than his "Avengers" costar Jeremy Renner did back in 2012). The most important quality in an "SNL" host is the ability to make fun of oneself and go with the flow, and Hemsworth was all in from start to finish.

Of course, the show lampooned his good looks — like the American Express ad explaining “if a jacked Australian with a perfect face can make it, anyone can” and the “Brother 2 Brother” sketch, where he starred as Taran Killam’s much better-looking twin — but in a way that allowed Hemsworth to be charmingly self-deprecating about his own beefcake image. He also deftly handled some of the odder material we’ve seen recently, from riding around on a razor scooter semi-shirtless to rapping in dreadlocks alongside Kate McKinnon's Iggy Azalea. Then, of course, there was the chicken sketch, one of my favorites of the season, in which Hemsworth's spaceship lieutenant is revealed to be in love with the ship's commander -- who is an actual chicken. It’s an absurd premise, the kind that might usually get tossed in at the 12:50 a.m. slot if it made it to air, but Hemsworth totally sells it, perfectly deadpan and hardly breaking, even as he gingerly lists the clucking chicken and puts it into the microwave after professing his love to it. Pulling off a romance scene with poultry is no mean feat, and I liked Hemsworth all the more for it for seeing it through.

But for me, the highlight of the evening was the (admittedly mandatory) "Thor" sketch, depicting a fake newscast following the Avengers’ victory over Ultron. In it, Hemsworth didn’t play the somber, kingly Thor we know, but a good-time party guy -- having ditched his Asgardian accent for his Aussie one -- whooping with excitement, dumping gatorade on Nick Fury's head, doing the Running Man and mocking Captain America's stiffness. While the "Avengers" franchise tends to take the business of superhero-dom pretty seriously, this sketch lets Hemsworth finally revel in the fun and silliness of his role. Seeing Hemsworth cut loose in character felt like something of a metaphor for the whole evening — letting go of the constraining shackles of superstardom and showing the fun-loving, likable guy beneath the cape.

It’s so much fun when you find out that these sort of megastars can get down with a bit of silliness -- that the homecoming prince/all-star jock and the lovable class clown archetype aren't indistinguishable. Heck, it’s why we love shows like "SNL" — because they pull back the curtain of celebrity to make our most untouchable stars appear relatable.  Think of the cult of personality that formed around Channing Tatum or Jon Hamm when it became apparent that they could be funny in addition to being gorgeous and talented. It’s why Chris Pratt and Jennifer Lawrence are America’s sweethearts -- because we feel like we would like them in real life, not just on stage.

And after this week's "SNL," we know this much: While we'd certainly call on Thor should the world need saving, when it's time to hit up the Dave and Buster's before some late-night karaoke, we'd much rather have a Hemsworth in tow (if not Chris, then Liam works in a pinch. Luke -- sure, as a last resort).