"The Bachelor": How the king of trashy reality TV recycled classical myths into an unbeatable formula

Virgin, fool, seer, crone? "The Bachelor" is still a guilty pleasure, but this season was rooted in the classics 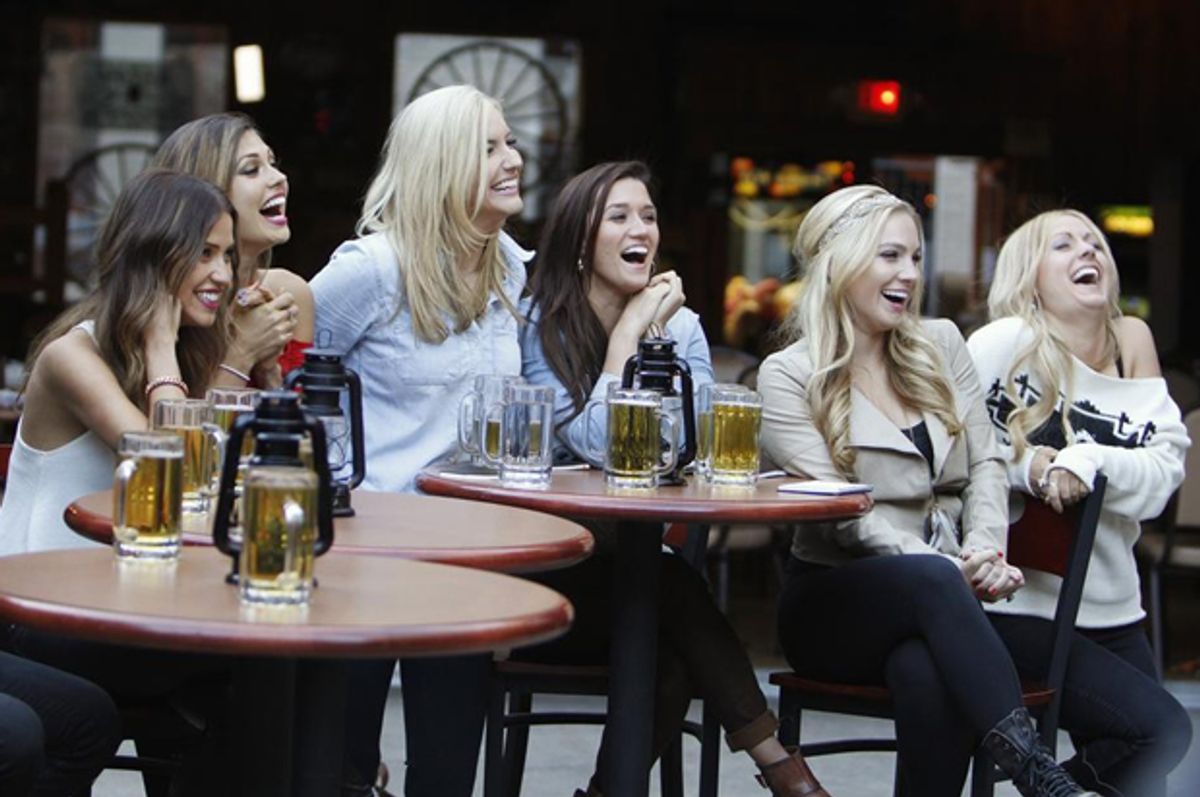 For those of us who study pop culture as if it were our own modern mythology, this season of “The Bachelor”—which airs its three-hour finale tonight at 8 p.m.—has been incredibly fruitful. The ABC reality show is a phenomenon in its own right—so much so that it occupies the entire prime-time bloc on Monday nights, from 8 p.m. to 11 p.m. “Bachelor” hunks and hotties and their counterparts on the not-quite-as-popular “The Bachelorette” regularly grace the covers of gossip magazines and can turn their stints on the shows into careers—Chris Soules, this season’s bachelor, was a spurned suitor from last season of “The Bachelorette.”

“The Bachelor” has, since 2002, produced 19 seasons of one dude vs. a houseful of women; ratings for the show are reliably strong, especially for female viewers; and the now-traditional “Women Tell All” penultimate episode is growing in ratings, 13 years after the show debuted. “The Bachelor” has found a winning formula, and in some ways, it is even perfecting it.

All reality television—especially reality television that tells stories about sex, love and relationships—places itself squarely in the middle of believable authenticity and scripted inauthenticity; in a gray area between the fake and the real. On some level, the audience knows what they’re seeing is manufactured; on another level, the packaging lets the viewer see it as messy, drawn-out theater. It’s sort of like the appeal of professional wrestling, where the competitive aspect of the spectacle is secondary to the spectacle itself. The women may not be actually in love with the bachelor; the bachelor may have no intention of marrying one of the contestants. But they are, for the benefit of the audience, playing a no-holds-barred game. The bachelor will disappear with one of his paramours into the “fantasy suite”; he’ll make out with another in a hot air balloon; he’ll introduce a third to his family. At the end, he will get down on one knee and offer a diamond ring to the “winner.” Property will be exchanged; promises will be made. It might not be “real,” but it’s real enough—the artificiality being manufactured is given so much power that it becomes truth.

With the women who are vying for the bachelor’s attention (and for their limited moments on-camera to make it to the final cut of the broadcast), the artifice is their only currency. They have to become whatever the bachelor and “The Bachelor” want. It sets the stage for a parade of feminine archetypes, most as old as human culture itself. The ancients told stories of their gods and demigods in mythology. We have reality television.

The “Women Tell All” episode of “The Bachelor” throws these accessible identities into sharp relief. Unlike the rest of the season, which is taped well in advance of the broadcast, by the time “Women Tell All” rolls around, the contestants have seen the season to-date. They know what their rivals said to the camera when they weren’t looking; they know what Chris said to the other women on their one-on-one dates. They’ve seen the magazine covers, heard the speculation, read the blog posts on People.com (written, ostensibly, from Chris’ point of view). It’s one of the few hours of the show where everyone seems to be aware of the (in)authenticity of the proceedings. And they are mad. When they reunite, in front of a live studio audience, they’re carefully coiffed, wearing strappy heels and just-this-side-of-trashy gowns, and fully made-up—not to impress Chris, but rather, in preparation for battle.

Most curious, perhaps, is that the rage burning most brightly this season was not between the two eventual finalists for Chris’ affection—two nearly identical women named Whitney and Becca—but between Kelsey, a 28-year-old guidance counselor from Austin, Texas, and basically everyone else in “The Bachelor” universe. Kelsey either is actually disingenuously manipulative or was edited to be so; either way, she is reviled. And not coincidentally, the point held against her was the thing about her that was the most surprising: Kelsey is a widow even at her young age; her husband died from unnamed causes about a year before the show’s taping. This was what had the other contestants in uproar—both that Kelsey seemed to be using the “widow card” as a ploy to gain sympathy, either from Chris or from the audience, and that she could even be entertaining love for another man so soon after her last husband passed away. In one particularly memorable episode, she had a panic attack right before the rose ceremony and then requested to see Chris, in private; while she had an oxygen mask on her face, she appeared to be gloating that she would now not just survive the rose ceremony but win all the roses. She also timed her first kiss with Chris for right after she told him about her dead husband, and then proceeded to tell the camera that her story is “amazing.” The other women started calling her the Black Widow, and one woman went so far as to suggest that perhaps the dead husband didn’t even exist.

That woman—Ashley I.—had her own surprising story that she brought to the forefront at the beginning of the season. Opposite the crone—the post-sexual witch figure that Kelsey began to inhabit—positioned an unlikely virgin, who declared herself as such on national television, at the ripe old age of 26. (Becca, one of Chris’ two finalists, is also a virgin. But she doesn’t talk about it nearly as much.) The first time Ashley met Chris, she was wearing a belly-baring top that revealed a navel piercing in the shape of a magic lamp, like a genie’s lamp (possibly chosen because Ashley looks a little bit like Disney’s Princess Jasmine). She informs him that if he rubs it (and he does) he now has three wishes, redeemable whenever he wants. He claims the first then and there, by making out with her a little bit. This read as pretty sexually forward for a woman who claims to have no sexual experience; cue speculation.

Naturally, it is sort of backward for any caricature on a produced reality show to accuse another caricature of being inauthentic; what’s eerily fascinating about “Women Tell All” is that everyone accuses everyone else of being fake, even as Chris, the man who said he was in love with bachelorette Andi a few months ago, implores all the women that all he wants is someone to trust. Interestingly, Chris rejected a few of the women who were most authentic with him—Jade, a contestant who had previously posed nude for Playboy, and who had been a front-runner up until she confessed as much to Chris (leading to a much-publicized blog post from Chris featuring the word “disturbed”). And dismissing one archetypal whore may have made it easier for him to hit-and-quit another front-runner, Kaitlyn, who mysteriously lost all of her allure after she spent the night with Chris in his fantasy suite. Virgins, whores, crones and even mothers: Contestant Mackenzie has a son, Kale, waiting at home during the competition. She did not make it very far in the competition.

The enigmatic, blank-slate figure at the center of the “Bachelor” franchise is host Chris Harrison, a bachelor himself, who serves as seer, guide, counselor and voice of reason, depending on what he’s asked to do. He is, to continue the mythological angle, the show’s Tiresias—having lived as a man and a woman, of sorts, he now merely observes the banalities of human behavior. He gives interviews throughout the season on how the women are doing, and it’s worth noting that he almost always observes how well they’re playing to an unspoken set of cultural norms—Jade was too honest with the Playboy photos, Kelsey was too eager with the widow angle, no one really cares that Ashley I. is a virgin because she’s a narcissist, but Becca being a virgin raises some red flags for Chris and his family.

During “Women Tell All,” Harrison guides the conversation. He listens impassively as charismatic, pretty Britt cries through her interview; she was slammed by a few mean girl types behind the scenes for not being “consistent.” (What emerged, after Carly explained her reasoning and Britt explained hers, was that Britt had made the mistake of actually saying what she thought when she visited Chris’ hometown of Arlington, Iowa, where he expects his future wife to live with him. How dare she!) But the only person that Chris Harrison seemed to really connect with is the unpredictable, possibly mentally ill Ashley S., who responds to every obvious prompt from the show with apparent surrealism. In an early episode, she wandered away from the film crew to look for what she thought was an onion growing in the verge; it turned out to be a pomegranate, which she picked. She then crashed Chris’ upfront with the camera crew to talk to him about ... nothing much. At “Women Tell All,” she brought Harrison an onion, which she apparently was inspired to start growing once she returned home after taping. Harrison seemed absolutely taken with her, the embodiment of that other archetype, the fool; where the other women pretended to seem authentic, Ashley S. did not even try.