Tom Cotton's dopey talking points: Getting it wrong on Iran, over and over 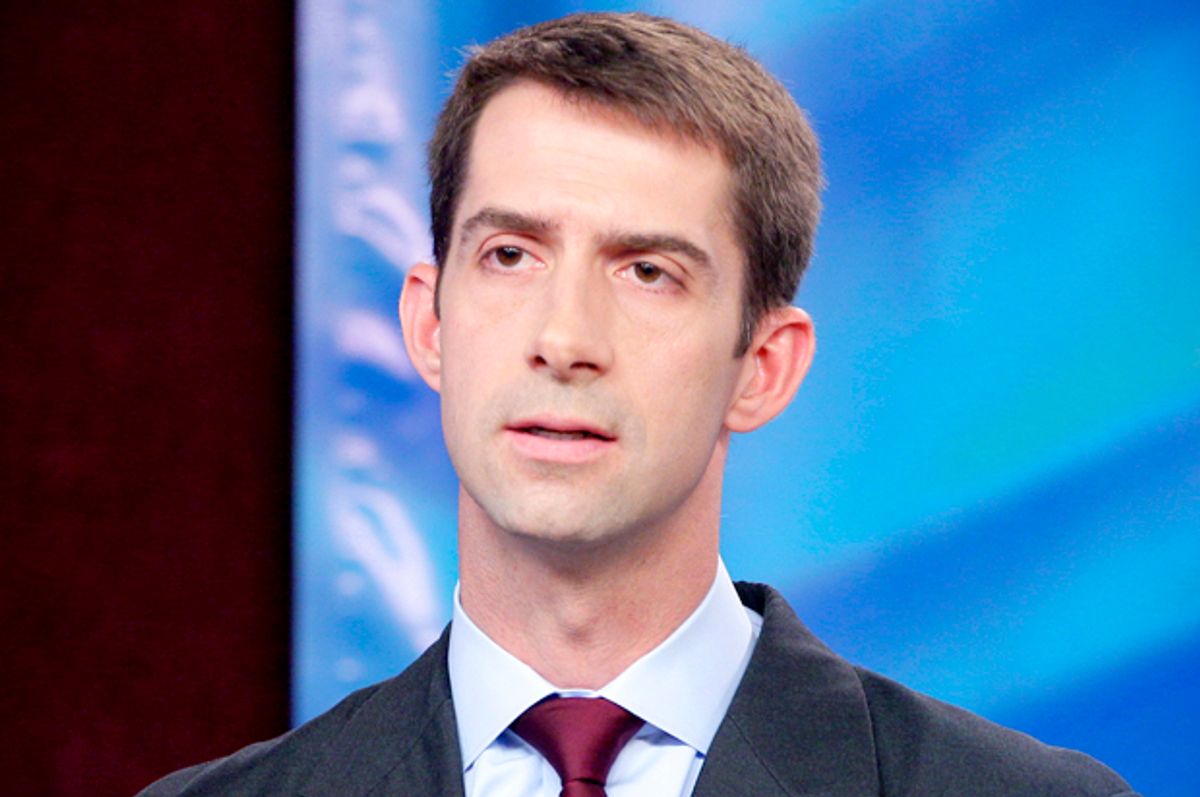 Back when Tom Cotton was running for Senate against Mark Pryor, he demonstrated a preternatural talent for speaking only in talking points. You could ask him a question about literally anything and he’d answer by saying that Obamacare is killing jobs and Mark Pryor voted with Barack Obama 93 percent of the time. During one of his debates with Pryor, a questioner actually cut Cotton off in the middle of a response and pointed out that he was “just doing talking points” and not answering her question. Cotton smiled politely and continued on with his canned messaging. He was merciless, robotic, and unstoppable.

The campaign is over and Cotton is safely ensconced in the Senate for at least six years, but his tactic of blunt-force talking-point repetition has endured. Cotton stopped by “Morning Joe” today to discuss the uproar caused by his “open letter” to the Iranian government explaining the basics of American constitutional government. The letter has been criticized as a fairly blatant attempt to sabotage the U.S.-led negotiations over Iran’s nuclear program, but Cotton insisted that’s not the case (his previous stated intention to sabotage the negotiations notwithstanding). Confronted with those criticisms, Cotton had one thing to say, and he said it several times over.

Asked by Joe Scarborough to respond to claims that he and the 46 other Republican senators who signed the letter “undercut” the president, Cotton said:

COTTON: The point we’re making to Iran’s leaders – who, if you talk to many Iran experts will say, don’t understand our constitution – is that if Congress doesn’t approve a deal, Congress won’t accept it.

Asked by Mika Brzezinski if he was “tampering” with the process, Cotton said:

COTTON: No. We’re making sure that Iran’s leaders understand that if Congress doesn’t approve a deal, Congress won’t accept a deal. Because we’re committed to stopping Iran from getting a nuclear weapon.

Asked by Brzezinski if his actions were appropriate, Cotton said:

COTTON: Yes. This is about stopping Iran from getting a nuclear weapon. And Iran’s leaders need to understand that any deal that gives them a path to a bomb today, tomorrow, ten years, fifteen years from now will not be accepted by the United States Congress.

Asked by Brzezinski if he wasn’t making practical negotiation of any sort impossible, Cotton said:

COTTON: Iran’s leaders have to understand that while the president negotiates agreements under our constitution, Congress approves agreements, and if Congress doesn’t approve an agreement, then no future Congress, no future president is bound by that agreement.

Cotton reiterated subtle variations of the same thing a couple more times during the nine-minute interview, just in case the point hadn’t been drilled deep enough into your skull: an agreement that exists only between the president and Iran won’t survive the end of Obama’s presidency.

The problem facing Cotton’s talking-point barrage is that he’s not quite right. There’s a good case to be made that the Obama administration should be doing more to include Congress in negotiations with Iran, and part of it does indeed rest on the idea that congressional buy-in would give any agreement added weight and legitimacy. (Cotton’s showboating and unnecessarily provocative letter, of course, only helps make the administration’s case that Republicans in Congress aren’t behaving in good faith.) But it’s silly to claim that a lack of congressional input will render this agreement null once a new (presumably Republican) president takes office.

As Dan Drezner points out, this isn’t a bilateral arrangement between the Obama administration and Iran – the White House is working with an international coalition. “If a deal is reached, it’s a deal that has the support of all the permanent members of the UN Security Council plus Germany,” he writes. So if President Jeb Bush or Scott Walker comes into office and announces that they’re going to repeal and replace Obama’s nuclear pact with heavy sanctions and threats of force, he won’t just be sticking a thumb in Iran’s eye, he’ll also be repudiating some of the United States’ most valued European partners and NATO allies. Also, hypothetical President Republican Man would be rightfully accused of unilaterally abandoning an international framework in favor of a path to armed conflict in the Middle East. If the deal shows tangible signs of actual progress, the next president will under tremendous international pressure to, ahem, stay the course.

I suppose it’s possible that a new Republican president would make it his first order of business to alienate the international community for the sake of some saber rattling. War with Iran is, after all, the impossible dream for a great many Republicans and conservatives. But it seems pretty unlikely, no matter how many times Tom Cotton says it will happen.