"Women in the United States are being economically smothered": Patricia Arquette continues quest for equal pay 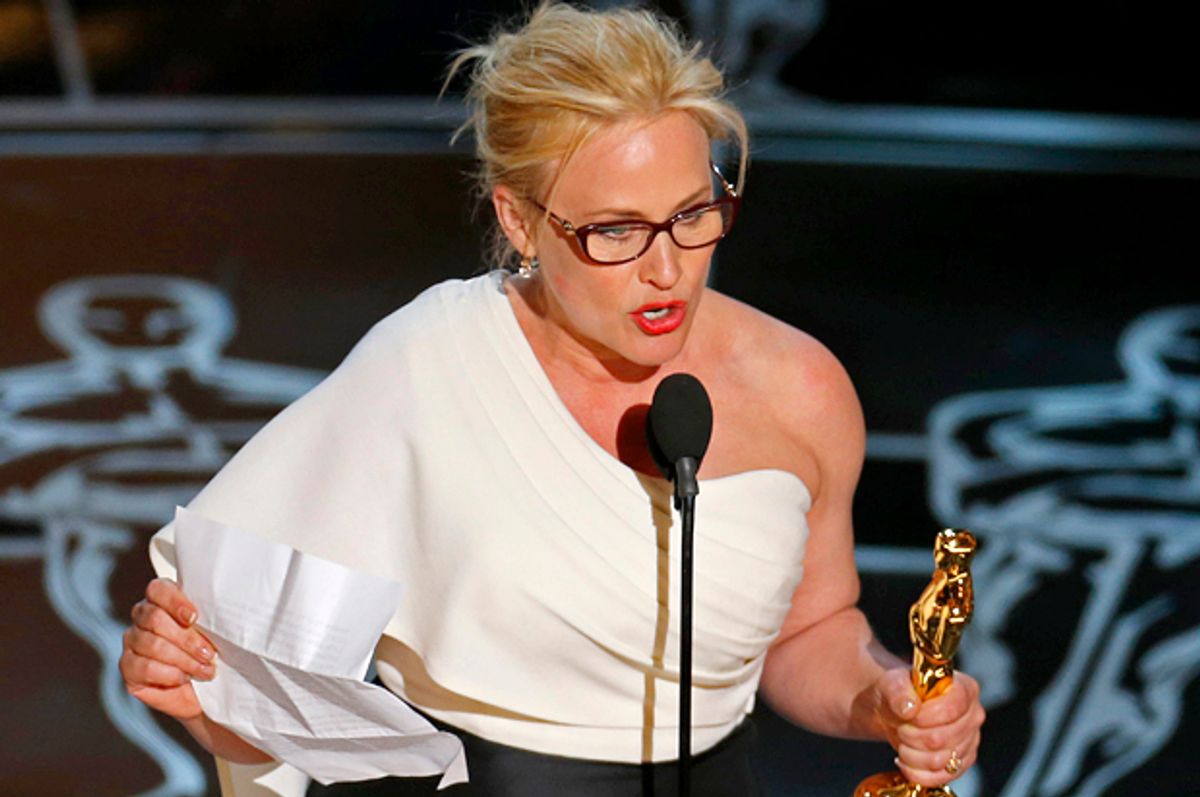 Actress Patricia Arquette continued her rallying call for equal pay Tuesday night at the UN Women's Planet 50-50 by 2030 event, which commemorated 20 year anniversary of the historic World Conference on Women in Beijing. She was one of many women to take the stage and call for gender equality on a roster that included former Secretary of State Hillary Clinton and Melinda Gates, to name a few.)

Arquette -- who acknowledges that she's not a longtime advocate -- quickly rose as a champion for pay equality, after making a fiery call for the end of the wage gap during her Oscar speech. The actress' rallying cry, however, was quickly marred by controversial remarks made offstage, which displayed a startling lack of intersectionality.

During her Tuesday speech, Arquette doubled down on her call for pay equality and took steps to correct her previous comments, making sure to include all women in the quest for equal incomes.

Of course there were still a few foibles. Arquette started on shaking footing, seemingly unused to the advocacy platform that so many politicians are used to holding, and at the international event, geared towards tackling women's rights on a global scale, Arquette chose to focus solely on the United States. However, as the speech built to a crescendo, it was hard to ignore Arquette's passion, power and how important it was that she even chose to stand up. Excerpts from the speech are below.

Arquette began by addressing critics who took issue with her speaking out for wage equality due to her successful acting career and material wealth.

"I want to tell you, as a child there were times where I lived below the poverty line, literally not having shoes to wear that fit me....If I told you that I was a single mother at 20, who lived with my baby in a converted garage, and that I was afraid for my baby's nutrition while nursing because I could only afford to eat macaroni and cheese mixed with water for weeks, so I could afford diapers that would also be true.

"But truer still is that my past hardships are irrelevant to why I'm here. I'm not a longstanding activist. I'm not an academic, but there's something that I am that compels me to speak out. And it's not because I'm an actor or a women. It's simply the fact that I am a human. I am an American. I see what is happening to women in America."

Arquette then made the case for solely zooming in on wage inequality in the United States:

"However, in a recent study analyzing wage equality of a 142 countries, America ranked as 65th. Women make less than men for the same work in nearly every profession and industry from entry level positions to high power executives. No matter if you have a high school diploma or a PhD....Forty-two million women in America and 28 million children live in poverty or right on the brink of it, even as we break records on Wall Street.

"We have limited and ineffective legislation that often varies from state to state. Federal laws have proven to be inadequate, and we know this because the pay gap has barely budged in the last decade. And if it continues at this snails pace, we're going to have to wait until 2058 in America to have wage equality."

"So let's be honest we have to replace various laws that are not ensuring fair pay to women. The effect of the gender gap is most oppressive for women of color. In the United States Latino, working full time make 56 cents to every dollar earned by their male white coworkers. In California, which is the 7th largest economy in the whole world that number dropped last year to 44 cents on the dollar. African American earn just 64 cents, white women make on average 78 cents to the dollar. Lesbian women and women in the transgender community also suffer wage penalties that hurt them and their families, and the women in the transgender community are suffering even more. Most are not even able to get a job.

"In terms of dollars and cents the average woman working full-time year-round loses over $10,000 every year to the wage gap. She loses $400,000 over her lifetime. That is $2 million dollars for women with advanced degrees. The question here to ask yourself is how different would my life be if I made 44 cents more for ever dollar. And I'd tell you, it would be very different."

"Women in the United States are being economically smothered. If women were actually paid the full dollar we earned our lives would be drastically different. We'd have money to pay rent, and purchase property, pay off college loans years earlier than we are now able, start our own businesses and build retirements. We would not have to choose between groceries and quality child care. We would not have to choose between going to the doctor today and sending our kids to college later. And as we know a lack of financial independence is dangerous for women and children. It causes 60 percent of battered women to return to their abusers.

"We say we want an educated work force that can compete globally, do we? We say we want kids off the streets, but how can we expect that when their mom has to work and extra job or two to make up for the pay gap. This is about supporting families and getting women what they've already earned with their hard work. We need to stop forcing women to pay what is effectively a gender tax to the corporations that employ them."