Think of all the screw-ups this crew inflicted on us a decade ago. Now they're back, revived and worse than before 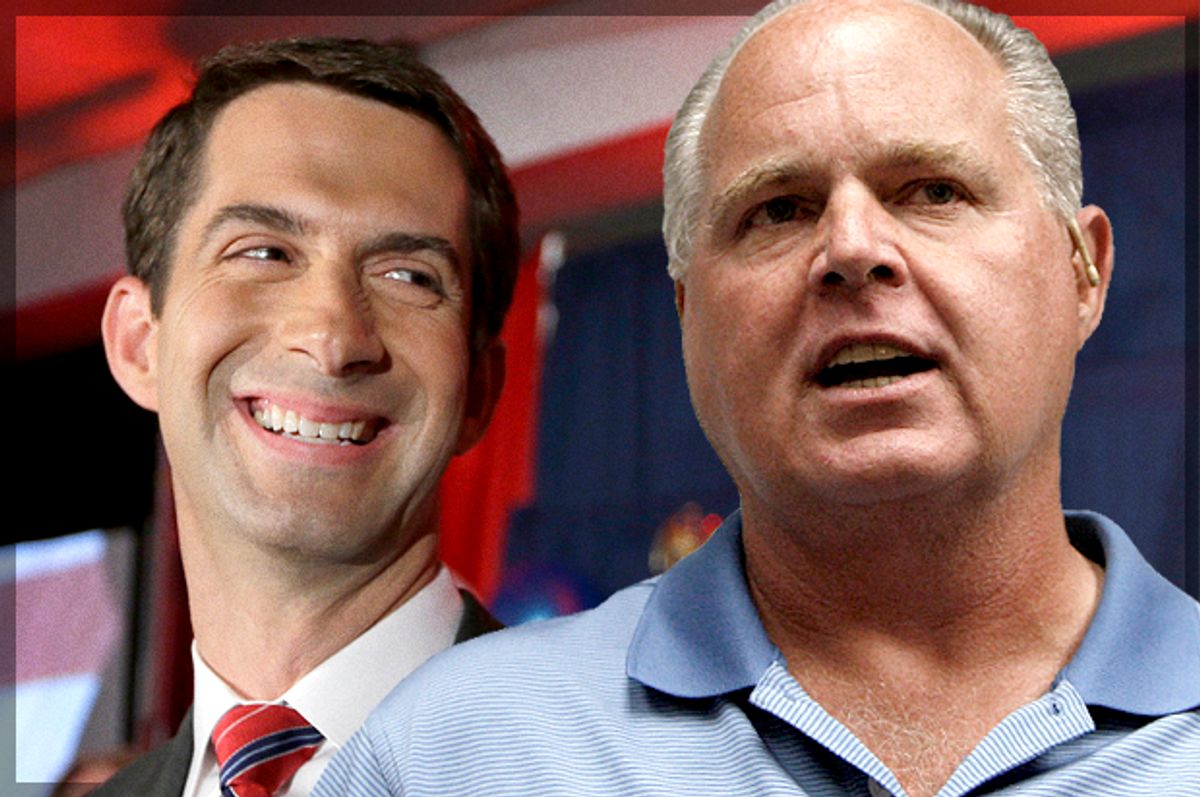 Who would have thought a few weeks back when I wrote about Freshman Senator Tom Cotton  that he would shortly become the pre-eminent Republican leader on foreign policy, persuading all but seven of his Senate colleagues to sign on to an unprecedented attempt to foil a potential nuclear arms agreement? Has any Senate novice, just one month into his first term, ever political launched into the stratosphere so quickly?  Until very recently it was taken as a matter of faith that freshmen were to be seen and not heard for at least a few months if not substantially longer. It's a testimony to Cotton's ambition and confidence that he took such a bold leap and succeeded.  As I wrote in my earlier piece, he is a formidable talent and not one to take lightly.

One need look no further than this for the ultimate endorsement:

Rush Limbaugh: Have to say, I like this new senator from Arkansas, Tom Cotton. He organized the letter, by the way. He organized the letter to the Iranian ayatollahs, led by Ayatollah Khamenei, telling them that whatever deal they do with Obama's not gonna last much longer after Obama's presidency lasts. Tom Cotton is now firing back at Vice President Bite Me, who has criticized his letter to Iran. Tom Cotton said, "What does he know about foreign policy?" I love this.

But this is about more than Tom Cotton's political acumen.  It's also about his policy acumen and that of the Republicans congressional caucus which has in recent weeks decided to usurp the executive branch's authority to negotiate with other nations. First the Republican House leadership broke with normal protocol by extending an invitation to the Prime Minister of Israel without consulting the White House, an event widely assumed to be a "message" from them about the pending nuclear negotiations with Iran. And now the Senate Republicans joined their brothers and sisters in the lower House, this time injecting themselves directly into the talks by addressing the foreign nation directly, telling them that they had every intention of throwing out any agreement the president makes at their earliest opportunity.

There has historically been some back and forth and there are various legal precedents for congressional involvement/interference. But this is a pretty radical departure from the usual norms. On the other hand, some of the leading voices agitating for this confrontation are pretty radical people. For instance, there's President Bush's UN ambassador John Bolton, possible presidential candidate and perennial advocate for marching on Tehran at the earliest possibility, who wrote in National Review that the congress should essentially block every one of President Obama's foreign policy initiatives by any means necessary. And that includes any agreement to combat climate change presumably because that's a liberal plot to destroy capitalism and the flag. Or something.  And the hawks like LIndsey Graham and John McCain are, as usual, drooling at the prospect of war. Any war.  (In fact Graham is working himself up into a full-blown nervous breakdown he's so frightened --- one day it's ISIS that's coming to "kill us all" and the next it's Iran.)

Other Republicans seem to just be confused. As Steve Benen pointed out, presumed presidential candidate, Senator Marco Rubio  recently said, “the reason Obama hasn’t put in place a military strategy to defeat ISIS is because he doesn’t want to upset Iran," seeming to be under the misimpression that Iran and ISIS are on the same side. Dr Ben Carson similarly commented that the U.S. needed to be just as militant toward  "the Shia" who are based in Iran as we are of ISIS, apparently not realizing that the American Iraqi allies are mostly Shia Muslim.

But there's another group of Republicans getting back in the saddle and supporting Tom Cotton and company, the Neocons.  (I wrote about them here.) But none are as notorious as former Bush pentagon official Douglas Feith, known far and wide by General Tommy Franks' famous quote that he is the "dumbest f**king guy on the planet." From Abu Ghraib to the poor post-war planning to the stovepiped intelligence and everything else, Feith's fingerprints can be found on each detail of the disaster that was the Iraq war. And yet the Wall Street Journal doesn't see any of that as an impediment to publishing his "critiques" of the Obama foreign policy as if he actually maintains some credibility. For instance, his latest on the Iran negotiations from just this week:

The Obama administration has wedded itself to a cooperative policy toward Iran. The White House rejects the coercive approach as not viable. But if Iran violates its deal with us, won’t our response have to be coercive? President Obama insists that his policy is the only realistic one. In doing so, he is showing either that he is naive and uninformed about the relevant history or that he no longer considers an Iranian nuclear weapon “unacceptable.”

So Feith, sounding almost as thick as Rubio there, informs us that even though one enters into an agreement it's possible that one of the parties might not fulfill its side of the bargain. Yes, that's true. But he apparently thinks that since coercion might someday be necessary if Iran violates its agreement not to build a nuclear weapon, the agreement is useless. So we must use coercion. That's so circular it gives you a headache. In any case, since it's Feith saying it, perhaps we should ask how that "coercive policy" toward Iraq worked out for us? After all, it turned out that invading that country on the basis of its non-existent nuclear program was instrumental in the creation of ISIS --- last week's boogeyman.

You would think that anyone whose main claim to fame was being a primary planner of the worst foreign policy disaster in recent memory would be a bit humbled by his fall from grace, but it appears that he and the rest of the neocon crew are tanned, rested and ready to push America into its next global disaster as quickly as possible (If you listen to talk radio, the rank and file are so confused about who's who that they're pretty much coming right out and saying that we should just kill them all and let God sort it out.)

One can never be sure of the details of neocon foreign policy. They are predisposed to invade any country that looks at the US sideways, particularly in the middle east for a host of ideological and strategic reasons. It's extremely inconvenient for their dream of "going to Tehran" if the president is able to secure a verifiable nuclear agreement, making it much more complicated for them to launch an invasion based upon vague notions of a "smoking gun turning into a mushroom cloud."

Boy who cried wolf and all that. Still, if you want to see some good old fashioned chutzpah, check out Iraq debacle architect Douglas Feith's classic projection of his own radical PNAC clique on to President Obama and some of his advisors:

• U.S. leadership in the world is necessary; others cannot be expected to step into its shoes if America fails to lead. •America should act in the world to promote U.S. national interests, and when it has done so, America has generally been a force for good. • As valuable as coalitions can be, America should protect its freedom of action. • U.S. military strength is crucial for the defense of America and its allies and for the effectiveness of American diplomacy.

Not all Americans, however, have supported those ideas. A small but influential group, mainly composed of progressive academics, has challenged them for decades. Its members interpret U.S. history and view the world differently. They fault the United States for focusing narrowly on its own national interests rather than promoting “global” interests. They argue that American leadership has really reflected arrogance, selfishness and a bullying disrespect for the rights of others. America, they contend, hasn’t been a force for good in the world — especially when it acted outside multilateral frameworks, such as the United Nations Security Council.

According to this view, America and the world would be better off if U.S. presidents were more constrained and less concerned about preserving their strength and freedom of action. Foreign and domestic constraints on American action are good, they believe, whether they take the form of treaties, subordination to multilateral forums or reduced U.S. military capability.

This radically negative perspective appears to have little public support, which explains why popularly elected politicians generally don’t give it full-throated support, even if they agree with it.

Setting aside the odd idea that diplomacy, multilateralism and treaties are some kind of radical fringe concepts you have to laugh at the fact that this fellow who just this week is condemning the president for pursuing an agreement with Iran and who supports the congress interjecting itself right in the middle of it was just recently arguing that Presidents should have no domestic constraints on his ability to conduct foreign policy. Apparently, that only applies to the good presidents, not the bad ones. Thankfully, Feith and Limbaugh and Cotton are here to tell us which are which.

And one can only speculate whether the minority of the American people who voted for George W. Bush in 2000 would have done so if they'd know he was going to run his foreign policy on the basis of a manifesto from a small group of neocons most people had never heard of called the Project for a New American century but considering the calamitous results of their influence it's highly doubtful they're anxious to do it again.

Oh, did I mention that Jeb Bush signed on to that manifesto? Ah yes, I did.  He and Feith go way back.