Targeted for "looking Muslim": The Dawkins/Harris worldview and a twisted new hypocrisy which feeds racism 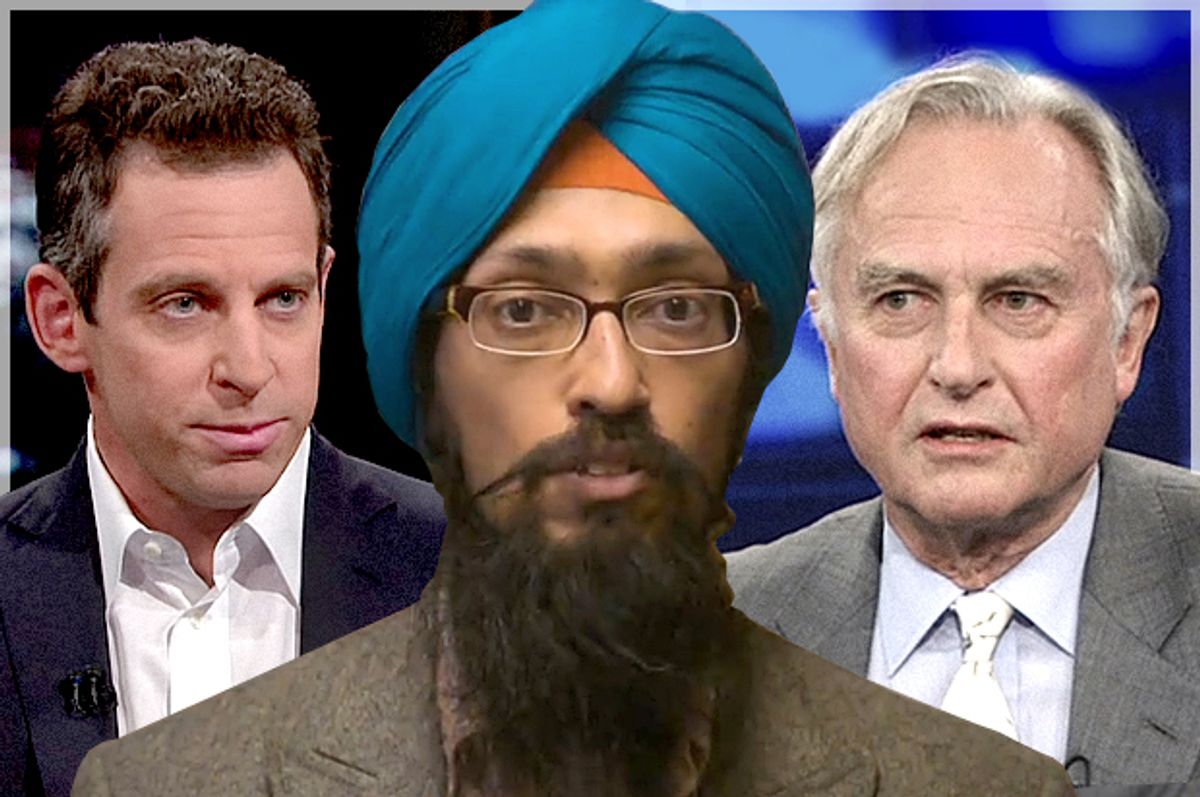 One of the most obnoxious refrains you hear when you complain about Islamophobia in the United States being a form of racism is “Islam isn’t a race, it’s a religion.” It’s a nasty derailing technique that’s endorsed by luminaries such as Richard Dawkins.

And it’s wrong for transparent reasons. You don’t need to look far for other examples where religion and ethnicity are conflated within the logic of prejudice. You only need to look as far as the Holocaust, the single bloodiest genocidal campaign in history, which targeted anyone of Jewish ethnic descent regardless of what religious beliefs they professed, based on stereotypes that explicitly invoked biological, racial difference.

You don’t need to look far in our own time to find people being targeted for “looking Muslim” regardless of their racial beliefs, and indeed, you can find Dawkins’ fellow luminary Sam Harris openly endorsing racial profiling as policy.

But the sheer hypocrisy of saying that anti-Muslim prejudice is a consequence of rational disagreement with the tenets of Islam rather than xenophobic distrust of people who look different from “normal” Americans becomes most obvious when you see how much of it falls on Sikhs.

The conflation of Sikhs and Muslim “jihadis” in the mind of the Western Islamophobe shows how shallow said Islamophobia is--Sikhs do not originate from anywhere in the Middle East but from the Punjab region of India. Sikhism does not share Islam’s Abrahamic lineage and has no direct connection to Islam, unlike Christianity or Judaism--the boundary between East and West Punjab that became part of the India-Pakistan border was, in fact, drawn to separate the Punjab region’s Muslim population from its Hindu and Sikh population.

If anything, Sikhs are historically one of the more “pro-Western” ethnic groups in South Asia--the Sikh Regiment was the “backbone” of the British Indian Army and was heavily decorated for its contribution to the Allied victories in World Wars I and II. The connection between the Sikh community and the “Islamic terrorism” of Al-Qaeda and ISIS is nil.

So why are Sikhs mistaken for “terrorists” so often? For the shallowest reason imaginable--the turban, one of the most common forms of headgear in the world, is associated in our minds with the Middle East, and Sikh men are required to wear a turban at all times--along with having uncut hair and beards--as a sign of devotion.

Ironically, while turbans are commonplace wear in many predominantly Muslim countries and traditionally Muslims are enjoined to have their heads covered as a sign of respect when praying, there is no similar requirement to wear a turban in Islam. And the keffiyeh, the headgear most common in the Arabian Peninsula, where the 9/11 hijackers came from, doesn’t look much like a stereotypical turban at all.

But bigots don’t care much about such fine distinctions. Hence one of the first “revenge” murders after 9/11 was of a Sikh man, Balbir Singh Sodhi, in Arizona. Hence the bloodiest act of “revenge” domestic terrorism in the U.S. was the Oak Creek shooting in 2012. Hence Sikh men being punished for the crime of walking around being visibly different by being run over by trucks and beaten by mobs of teenagers as recently as last year.

Of course, the perpetrators of violent crimes can always be dismissed as lone wolves, individual bad apples who don’t reflect on the community. Luckily for those of us masochists who make a hobby of studying prejudice and hate, there’s a vast swathe of bigots who aren’t quite bigoted enough to commit violent crimes but are still plenty bigoted enough to engage in targeted verbal abuse.

Take Vishavjit Singh, a devout Sikh, patriotic American, talented cartoonist and general bad-ass who made headlines for walking through New York City dressed as a Sikh version of Captain America and has now taken his show on the road.

Take Singh being asked to appear in an informational Facebook Tips video about the Facebook News Feed. Surely having a medium-profile cartoonist and comic book geek talk about how Facebook’s automated curation works wouldn’t be a big deal, right? (There’s a lot of reasons to dislike said automated curation, but little reason to shoot the messenger.)

But just as Lewis’ Law states that the comments on any article about feminism justify feminism, the comments on Singh’s casting in the Facebook Tips video showed why it was necessary--comments calling him an “Isis terrorist” and “camel jockey,” asking why a “normal American” couldn’t have been featured, even one commenter declaring he would “rather slit his wrists” than watch a video with someone who looks like Singh in it.

This is in response to an incredibly bland video where Singh does nothing but be on camera, dressed as a Sikh, talking about how Facebook works. That’s all it takes.

Is that not extreme enough for you? Then take the case of Veerender Jubbal, a video game enthusiast and Twitter user who made the mistake of having opinions online while wearing a turban.

Jubbal was already known in the games industry for being the random civilian who made the mistake of pointing out something extremely obvious--that the box art for the game Far Cry 4 looked pretty racist--and getting blasted by thousands of angry reactionaries across the Internet for daring to speak up.

Those of us who post in gaming-related Twitter have all known Veerender as an incredibly nice guy, someone who bucked a lot of Twitter trends by never using profanity, rarely if ever attacking or criticizing individuals by name, and responding to direct personal attacks with only the single syllable “Gosh!” He was dubbed a Blue Lantern of gaming--for you non-geeks out there, that’s the superhero corps that symbolizes Hope--and his current avatar is a piece of fan-art a friend made of “Blue Lantern Veerender.”

And for the crime of creating a single trending hashtag, #StopGamerGate2014, he was bombarded by the reactionaries of the gaming community with vicious abuse that takes my breath away--speaking as someone who’s no stranger to GamerGate-related harassment myself.

I’ve remarked before on how the vicious reactionaries of the gaming community seem to harbor particular animus for women, unleashing a level of abuse on female targets just for the crime of speaking up against them or existing in their space that male targets only get after weeks of sustained antagonism. I know I, a man of color, had to spend a lot of time being extremely loud, confrontational and, yes, profane about GamerGate’s abuses before I got their attention.

Veerender endured weeks of people spamming him images of the 9/11 attacks, including images of his own avatar superimposed on the burning Twin Towers. He had to deal with people photoshopping screenshots of his tweets to alter them in order to smear him as a racist. After months of some of the worst harassment I’ve ever seen, he abandoned his public Internet presence, upon which his enemies publicly celebrated their victory.

It just keeps going. It doesn’t stop. No sooner do we get to process another Sikh voice being harassed out of public life than we get a viral video of children getting into the habit at a young age, chanting “Terrorist” at a Sikh boy on the school bus, and threatening him with legal action for recording and sharing their behavior (a common pattern in such situations, regardless of the age of the harasser).

When I wrote my piece in the wake of the Charlie Hebdo shootings taking the stance that mourning the murders of the cartoonists didn’t have to mean supporting the racist xenophobia in their work I got a ton of pushback. I especially got a lot of condescending explanations that anti-Muslim rhetoric wasn’t racist because “Islam isn’t a race” and the French doctrine of laïcité (anti-religious, positive secularism) transcended my Americocentric notions of “racism” and therefore the grotesque racist caricatures of brown turban-wearing men were totally justified and also not racist.

Well, I know Veerender Jubbal, if only online, and considered him a friend. I saw what he went through firsthand. I don’t know Vishavjit Singh personally but have followed his career for a long time and wrote this column in direct response to a Facebook message describing the abuse he’s gotten and describing his long-term project of trying to fight it.

I don’t know the kid in the video--no one knows who he is, his identity has been hidden for his safety--but I’ve seen enough situations like that video to know the kid isn’t alone. He’s special only because he had the courage to document his abuse and share it, despite the blowback he knew he’d probably get (and probably has gotten).

I’m not pointing out the way Islamophobia spills over onto Sikhs as though to imply that actual Muslims are somehow an acceptable target. They’re not. But it’s still instructive to see how easily this vitriol spills over onto Sikhs simply because they have dark skin and wear turbans--or onto Christians because they have dark skin and the name “Hussein.”

It’s worth pointing out that racism is not just vicious and irrational but that it’s mindless and sloppy. The targeting of Sikhs shatters the lie that Islamophobia is about rational criticism of the religious tenets of Islam or a rational response to geopolitical realities, just as the racial violence directed against Japanese-Americans in World War II frequently spilled over onto Chinese- and Korean-Americans, even though China and Korea were ostensibly countries the U.S. was magnanimously fighting to save from Japanese imperialism.

We’ve had 14 years since 9/11 to learn even minimal, basic facts like the difference between Muslims and Sikhs. Nothing’s changed. Bigots don’t care, and they’re often proud of not caring. Racism is deeply woven into our culture, and it quite literally does not matter what the intellectual justification for a given prejudice is--set it loose in the wild and it will become another manifestation of racism, lashing out wildly and viciously at anyone who looks different and “wrong” to white people’s eyes.

So fine, criticize “radical Islam” if you will; develop strategies to “fight terrorism” if you feel it’s necessary to save lives. But if you refuse to acknowledge the dangerous strain of racism you may be feeding by doing so--if you erase the people totally unrelated to whatever you think the fight is about that your fight is going to hurt, as Dawkins, Harris and the staff of Charlie Hebdo all did--then at best you’re a fool. At worst you’re a racist looking for a new way to get away with racism.