The new Ted Cruz: How Tom Cotton made GOP's showboat problem even worse

Tom Cotton's "open letter" stunt backfired on the GOP, but made him more popular than ever. Sound familiar? 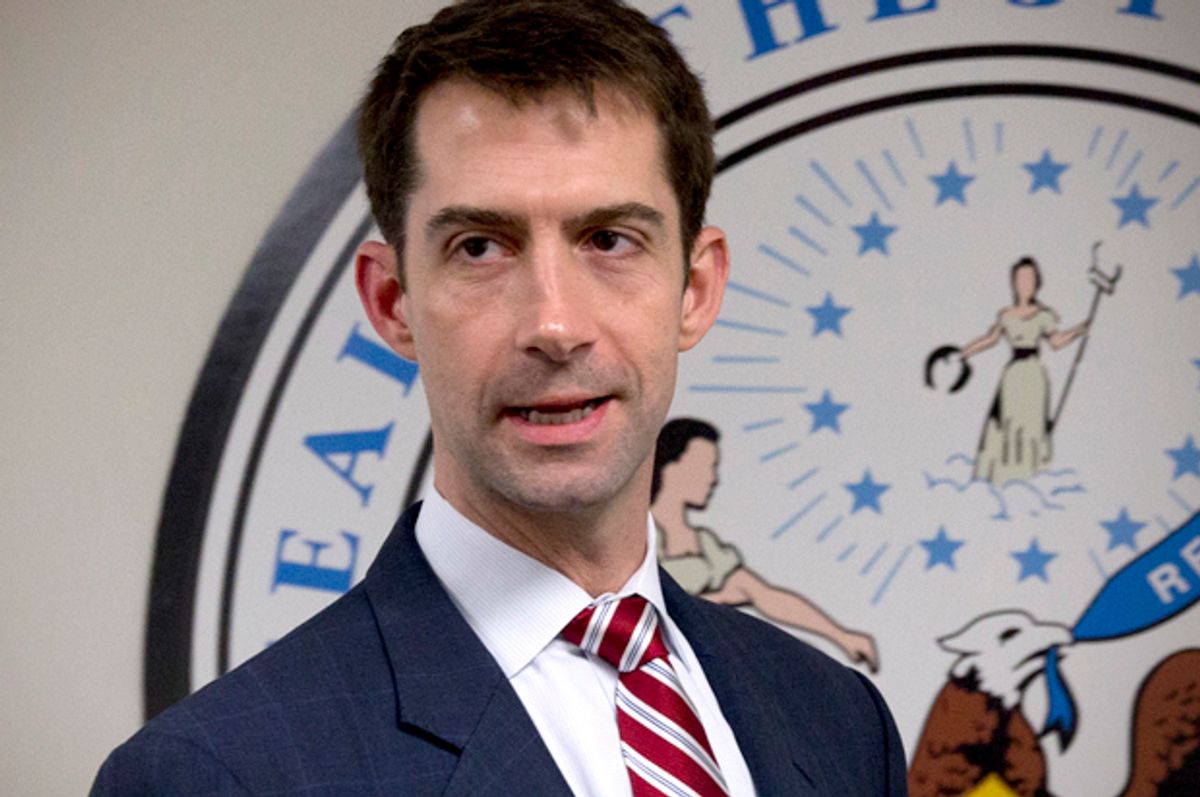 It’s been fun watching Republicans in Congress recalibrate their opinions of stripling senator Tom Cotton’s effort to derail nuclear negotiations with Iran. The junior senator from Arkansas persuaded 46 of his GOP colleagues to sign his “open letter” to the Iranian government informing them that any deal that doesn’t have Congress’ approval won’t outlast the Obama administration. The letter, which was not quite right on the merits, was an inflammatory gesture that has since blown up in the faces of the people who signed it. The whole debate over the negotiations has been reduced to a partisan slap fight, and the Republicans who are trying to do the actual legislative work to assert Congress’ authority are complaining that Cotton’s letter could undermine their own efforts.

Faced with this self-made setback, Republicans are trying to convince reporters that the letter was just one big joke that the Democrats took too seriously, or that the whole thing is somehow President Obama’s fault. John McCain, who signed the letter, now allows that it was probably a stupid thing to do, though he’s also convinced that Obama’s bears responsibility in the end because the president “established a poisoned environment here which sometimes causes us to react maybe in not the most effective fashion.”

The only person who is perfectly happy with how things have shaken out is Tom Cotton. He seems mainly concerned with promoting the Tom Cotton brand and/or starting a shooting war with Iran, and the letter achieved at least one of those goals. Since the letter went public, Cotton has been all over cable news and “fellow Republican senators are suddenly flocking to him for counsel on foreign policy,” per Politico. Cotton hasn’t actually done anything in a legislative capacity to prove his foreign policy acumen, and the things he says out loud about foreign affairs are completely bonkers, but he made some loud noises and he’s on TV a lot so he’s being treated as an expert.

Right now, Cotton is playing the same role in foreign policy debates that Ted Cruz played in the Obamacare funding fights of 2013. The dispute that ultimately led to the government shutdown was nurtured along by Cruz, who worked his colleagues in both houses of Congress to oppose any funding legislation that included monies for the Affordable Care Act. His grandest, most dramatic gesture in this fight was a 21-hour “filibuster” on the Senate floor in opposition to Obamacare. It wasn’t an actual filibuster – Cruz was just filling time in between scheduled votes and ended his speech an hour before he would have been forced to stop talking – but he nonetheless drew the support of some influential Republicans, like Marco Rubio and Rand Paul, who stood beside him.

The whole episode backfired spectacularly on the GOP and was generally regarded as an embarrassing failure for the party and its leadership, but it was fantastic for Cruz. The fake “filibuster” made him something of a Tea Party legend, and he established a new standard for Republican opposition to Obama’s big government socialism. He did precisely zero work legislatively, but he nonetheless turned himself into the gravitational center of the entire policy debate. Cotton has achieved much the same effect, using a flashy and provocative stunt to make himself the face of Republican opposition to an Iranian nuclear deal.

It’s this dynamic that helps explain why the newly empowered Republican Congress has been such an utter disaster at actually achieving its legislative aims. There’s zero incentive to do the difficult work of shepherding legislation through Congress. It’s far easier and far more rewarding to make a spectacle of yourself in pursuit of a political goal – you get accolades from the base, your colleagues will happily sign on to prove their conservative bona fides, and the TV networks will come a-running. The leadership in both the House and Senate, when they’re not complicit in this behavior, have proven themselves inconsistent at reining it in.

The end result is near-total paralysis as the party is unable to reconcile the grandiose political goals of its showboating members with the ugly realities of legislating. It’s embarrassing for the party and it renders hollow the leadership’s frequently made promise that the GOP is capable of responsible governance. But the paralysis isn’t going anywhere anytime soon, mainly because Republican voters and the national media eat up the antics of people like Tom Cotton and Ted Cruz.