Caught between the cool girl and the "Trainwreck": Navigating the cruel angles of pop culture dating tropes

Books, music and film tell us that boys and girls (in America, at least) are still having such a sad time together 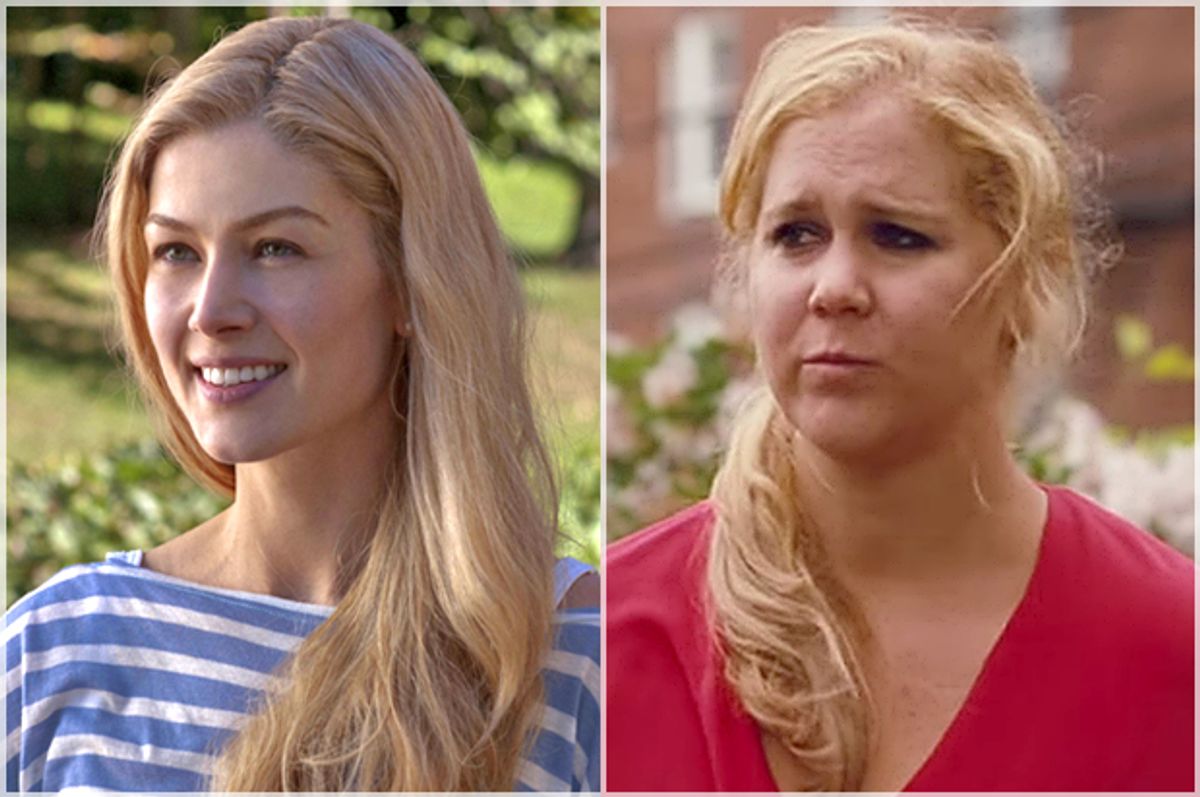 It’s an interesting time to be a single person. We boast the number of followers we have, which would’ve been a unheard of ten years ago, swipe through apps that are supposed to simulate real life attraction like a scene from Gary Shteyngart’s "Super Sad True Love Story" and collect matches and numbers as if dating is a competition in metrics. For all the ease with which these nifty bits of technologies are meant to assist in connection people, it’s made navigating the lust frontier that much more treacherous. How are we supposed to meet someone? And what are we supposed to do if there’s a chemical connection – or even genuine interest?

The preview for Amy Schumer’s upcoming comedy “Trainwreck,” which is screening Sunday at SXSW, illustrates the contemporary scene a little too perfectly. In a scene in the trailer, Amy’s character, a magazine journalist who doesn’t believe or practice monogamy, begins dating a man she actually likes. Much to her surprise, he calls her on the phone -- yep, dial tone at all; no, not a Facetime call -- while she’s chatting with her BFF. Immediately, they both assume that it’s either a butt dial or life-threatening crisis. Who calls anymore? Shockingly, it’s far more simple than that: all he wants is to talk to her -- actually talk.

Last week, Jeff Wilser wrote about an interesting series of symptoms a buddy of his underwent while casually seeing a woman for New York Magazine. There was a suggested loss of appetite, memory problems, and, yes, that unfamiliar -- though not entirely unrecognizable -- ringing in his pocket. Like Bill Hader's doctor character in "Trainwreck," this guy's lady friend chose to call rather than text/email/tweet or whatever else we do these days to avoid the intimacy of hearing someone’s voice. According to Wilser, both he and his buddy (and many, many other men) suffer from flabby boyfriend muscles, atrophied by their own behavior. They opt to casually date someone(s) for a short amount of time, back off once it starts getting too serious, then realize that years of this behavior hasn’t led to an envy-worthy series of hot flings -- but a state of being mostly alone and pushing 40.

I’ve never been very good at casual dating. Sitting across a table from someone that I’m not sure I have any interest in for an hour over dinner seems totally torturous. I’ve never been a fan of trying on clothes either. Oftentimes I’ll see a dress I don’t think I can live without, choose what I hope is the right fit and hope for the best. I’ve operated under similar logic when it comes to dating. I like the rush of excitement of not knowing how it’ll turn out, but being inspired enough to try it out based on a spark of inspiration. A spell-breaking kiss on the hand, a knock on the door announcing the arrival of someone you’ve been hoping to date. You know that once that door opens life will never be the same, and you welcome it. You invite it to swallow you whole if it wants to. You go out, share secrets, realize that maybe you two are the first and only people to experience what you share. Things are great, and then the dust settles. Something’s not quite right, the relationship (can you call it that?) is severed, and you’re left -- head spinning -- wondering how it turned wrong.

Maybe it’s me? Maybe I need to step up my girlfriend game to make a guy stick around?

Adelle Waldman’s 2013 novel "The Love Affairs of Nathaniel P." tells the story of a Brooklyn pseudo-stud who has his pick of any successful, beautiful and substantive woman he wants, but isn’t confident enough to attempt sustaining a relationship -- too much work. He opts to date around, ghost the women he’s seeing, you know -- the usual. When I read the book, I spent so much time either nodding in agreement or slamming the book closed with frustration. For a minute, I thought maybe Waldman and I had dated the same man once upon a time. YES! That happened to me too! He totally did that, and yup -- I felt just as confused! Waldman succeeds in illuminating the mindset of Nathaniel P. and his peers, from Silver Lake to Williamsburg, who, like Wilser in his essay, rationalize their behavior with the excuse that they're just “waiting for the right woman.”

Enter "Gone Girl," a novel I’ll forever be grateful to for introducing a formal definition of “the cool girl” girlfriend who’s always up to join the boys for a beer, always able to eat what she wants while still looking great naked, always “fucking game.” She pretends to be as chill as Schumer's detached serial dater, but only in service to one guy at a time. It’s these character traits that launch Amazing Amy off her pedestal after her husband strays. All that effort — to be fair, it might not feel like work when you care about someone, but to get the same disappointing results as if you hadn’t done anything special at all?

Florence + the Machine came into the spotlight in 2009 with the album “Lungs” that included the harp-heavy track “Cosmic Love,” which described the dizzying and celestial early stages of finding someone special, and then watching them disappear. There’s the initial thrill of finding  yourself in the same orbit of someone you find so wonderful -- magnificent even -- and the vast loss felt once they’re gone. You’re pretty sure they were there at some point, but then you begin to question yourself. But the band's recent single "What Kind of Man" turns the reflection outward and finally raises the question: Dude, what the hell are you doing?  The song opens with a familiar journey of pursuit: at least one partner still wounded from a previous relationship, both not entirely certain if sparks will lead to flames, one person hopeful enough to try. Then the song rises with skin-tingling tambourine and heavy guitar as Florence Welch sings “To let me dangle at a cruel angle / Oh my feet don’t touch the floor / Sometimes you’re in and then you’re half out / But never close the door” before asking “What kind of man loves like this?”

Well, according to pop culture (and personal experience), most men seem to behave — I’m not sure I would say “love” — like that. But I don’t think anyone believes it has to remain like that — at least I hope not. In Wilser's essay, he chooses to remain optimistic about exercising his own "boyfriend muscle" in hopes of developing into a man who can maintain a long-lasting and fulfilling relationship. For my part, I’m romantic enough to believe that men like the Nathaniel P.’s of the world aren’t complete assholes and that women don’t have to obsess over acting out some prescribed cultural trope to make a relationship stick. Part of me believes many men fear they’ll screw up a relationship, so they make an Oedipal flee in the other direction and play it off as an act of nobility, which spirals into the woman obsessing over how she can improve herself.  Maybe it shouldn't be a matter of filling the role of the "cool girl" or the "right woman," whoever she is. It’s a silly game to play, and at the end of the day, both the queens and the pawns end up in the box alone.