GOP's internal hate-fest: How a low-profile budget dispute is tearing the party apart

For its new budget, the GOP has to pick: More defense spending, or more small government? Here's why it'll get ugly 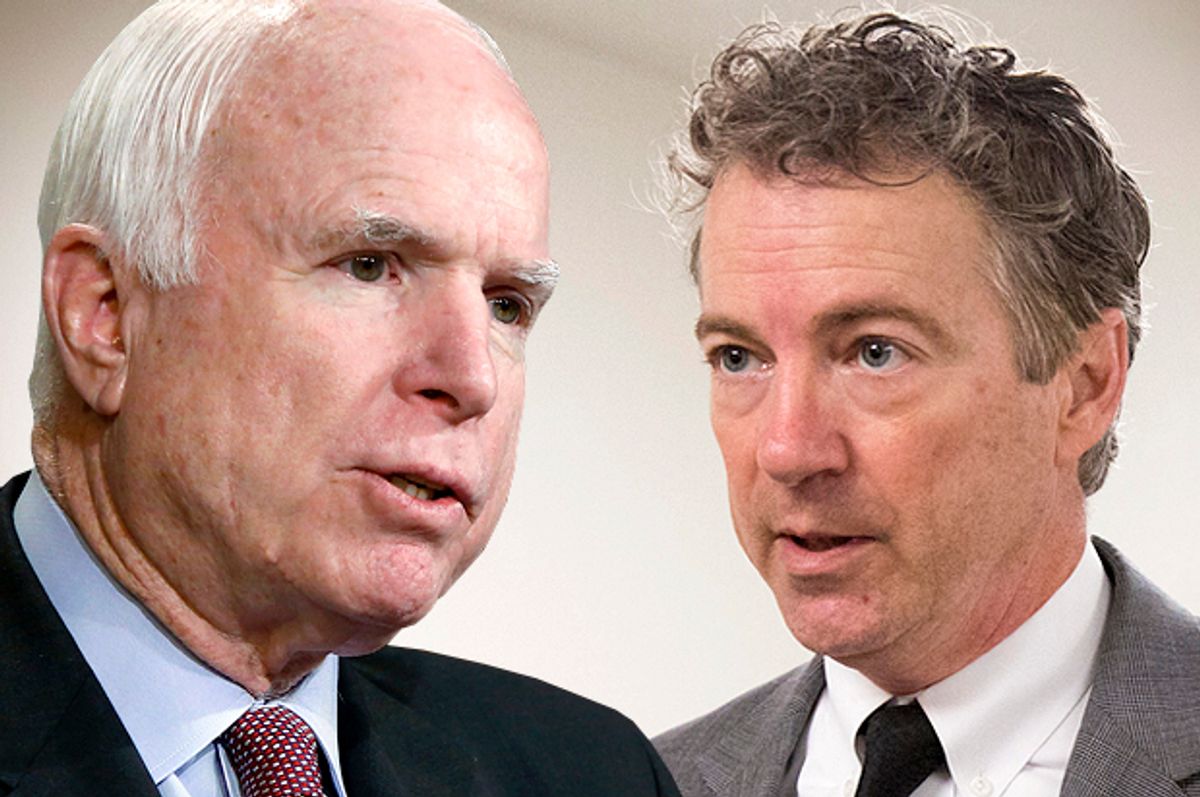 Not to go all Alanis Morisette on you, but the “civil war” that has roiled the GOP during the past few years, and which pits the rigid and reckless Tea Party against the staid and complacent establishment, has taken on some ironic dimensions as of late. Because although the national media, following Sen. Mitch McConnell’s lead, has interpreted the party’s lack of a Todd Akin-level disaster in 2014 as proof of the establishment’s victory — and paid less attention to the GOP civil war as a result — the fight, in truth, is far from over. And as a Monday New York Times report on the party’s still-unfinished budget makes clear, the nastiest internecine battle since the 2013 government shutdown may have already begun.

To understand the conflict, though, you’ve got to examine its roots, which stretch all the way back to 2011. You may have blocked out all memory of that horrible year’s horrible summer. But if you haven’t, you’ll recall that summer 2011 was when the U.S. came perilously close to hitting the so-called debt ceiling  — which, just by the way, is currently on-track to happen again — and when the White House and the Congress averted that manufactured crisis by agreeing to the big honking dose of austerity which we know today as “the sequester.” Or “sequestration,” if you’re not into the whole brevity thing.

The sequester is one of the weirder pieces of major legislation to come out of the Congress in recent years. It cuts about $1 trillion over an eight-year span and is intentionally designed to make those reductions arbitrarily by slashing the budgets of many departments that, in a sane world, would either be left alone or trimmed with greater delicacy. The reason the law is purposefully dumb in its execution is because it was always supposed to serve as nothing more than a negative incentive. If the Obama administration and House Republicans could not agree on where to make $1 trillion in cuts themselves, the logic went, then the sequester would step in and do it for them. Poorly, at that.

Of course, no such agreement materialized (largely because Republicans refused to go along with raising taxes on the super-rich, even when Democrats threw cuts to Social Security and Medicare into the mix). In 2013, the sequester kicked-in; and it’s been with us ever since. In fact, unless the Congress and the Obama administration agree on a different version of austerity, the sequester will affect the federal budget until the early 2020s. That means the U.S. could waste nearly a decade on the budgetary equivalent of cutting off your nose to spite your face; the big driver of the (so-called and overblown) coming debt apocalypse is Medicare, which for political reasons that should be obvious, is one of the few programs that the sequester leaves untouched.

Now, the sequester’s effects on the economy have not been as dire as some have predicted. Even with the sequester’s self-destructive limitations, the overall economy has continued to grow and the labor market is finally starting to catch up. Because its Cassandras have been seemingly refuted, many members of the GOP’s Tea Party wing have decided that the sequester is either not such a big deal, or is instead a crucial first step toward dismantling big government. And while many of them are no doubt sympathetic to GOP hawks, like Sen. John McCain and Sen. Lindsey Graham, who think the sequester’s defense cuts harm U.S. national security, they’re not willing to throw away what remains the biggest legislative feather in the Tea Party’s cap.

For most of the past four years, this internal disagreement existed largely in the abstract. The GOP did not hold full control over the Congress, and was therefore able to focus its attention on less divisive topics — like the many ways in which Democrats and President Obama are bad. But with Republicans now working hard to prove their competence by unveiling a budget, this point of disagreement can no longer be swept under the Capitol building’s rug. And with the state of the economy no longer dominating Americans’ attention, it’s increasingly become conventional wisdom among GOP hawks that the 2016 election will be about national security and foreign affairs. (Which, of course, is music to your ears if you work within the military industrial complex.)

So if you’re wondering why Graham, in the Times piece, describes the fight over the sequester’s defense cuts as “a war within the Republican Party”; or why McCain chides his fellow GOPers not to “complain about the president of the United States if we are going to stick to the sequestration numbers,” think of these two factors as the chief explanations. One, they’re the leading spokesmen for the bloc of the GOP that the Tea Party most tends to hate, and they’re eager to reassert their power now that it looks like American politics is moving beyond the austerity fetish that held sway during the Great Recession. Two, the 2016 election is right around the corner, and lobbyists for the defense industry (who will no doubt be hearing from Graham if he decides to run for president) are taking calls. Just ask Tom Cotton.

What we’re about to witness, then, is the GOP civil war we’ve long been promised. If the Tea Party has any real pull left, they’ll defeat or brush-back the push from McCain, Graham and God only knows how many lobbyists to increase defense spending in the Republican Party’s forthcoming budget. And if they don’t and they can’t, they’ll be revealed — at least on the federal level — to be little more than useful idiots for a power-hungry GOP establishment, as some Tea Party critics have long suspected. Only time will tell, of course; but if I were a gambler, I know how I’d bet.