They wanted me to tell those girls to lock themselves away. But I was never cut out to be a celibacy role model 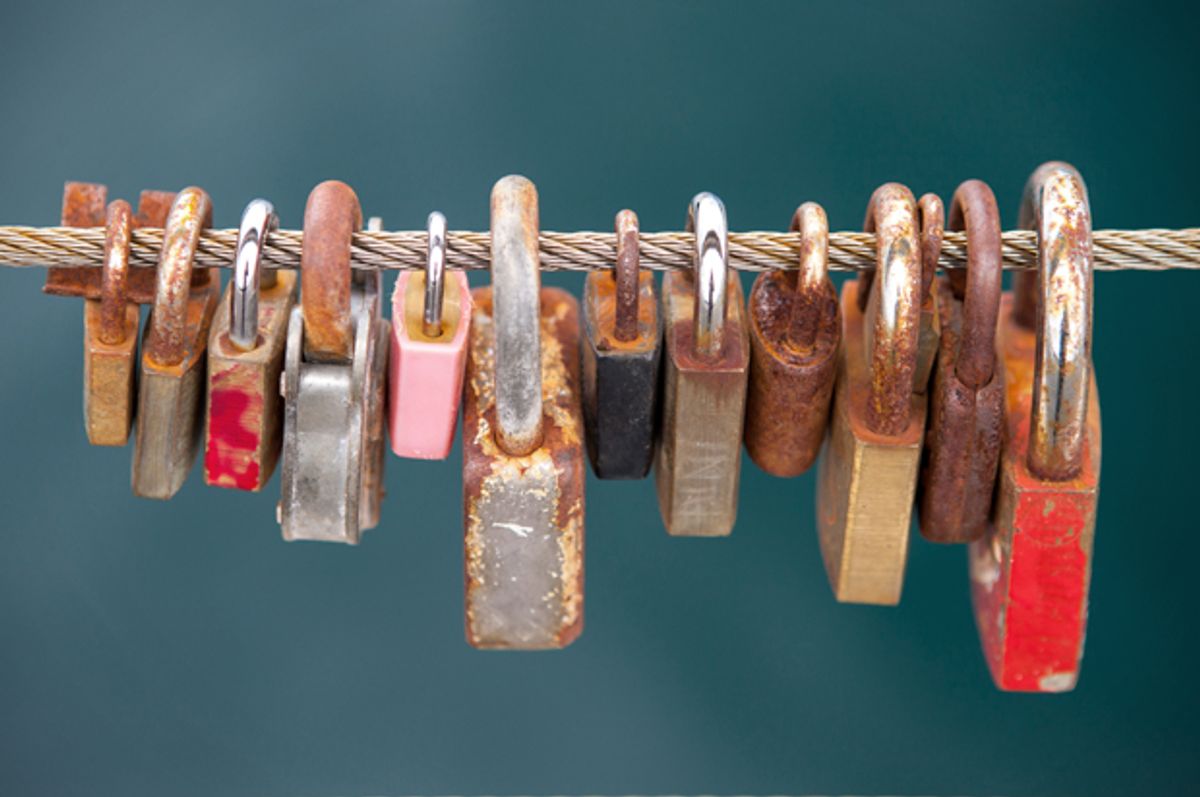 My first mistake at the Jammies for Jesus slumber party was wearing jeans. My second mistake—and please know, I'm guessing here—was sitting on the floor with 10 girls gathered around me on pillows as opposed to my preaching from a podium. My third mistake, and this one was quite clear, was telling these young black girls who'd been invited to this well-meaning, white evangelical Christian lady's home for some correctional popcorn and baked goods that God would forgive them if they had sex before marriage. Real talk, I went ahead and told them: God forgave you before you entered the room or were led behind that school building or got pulled into a vortex beyond your control.

I knew firsthand the soul-crushing weight of giving away pieces of my body to men who were cruel and undeserving, and I reflected the soft look of recognition and relief on those girls’ faces as I spoke to them. My host, however, grew angrier the more I related to her guests—some of them preteens who’d yet to reach puberty—because I was, in her exact words, “giving them permission to have sex.”

As if they needed any. Was I seriously supposed to tell these kids to wait until marriage for sex when there was no telling when that marriage would happen? According to the latest census results, 36 percent of black women over the age of 25 have never been married, compared to 16 percent of white women over the same age. Increasingly, over all socioeconomic segments, the percent of married couples is falling steadily, but the Christian evangelical ideal of sex only within marriage is fixed. It's static, no matter what else is going on around them. And that’s how I managed to anger the Jammies for Jesus lady, in attendance only because this particular talk was in her comfortable home, she wasn’t risking her life in the ghetto, and someone had to refill the chip bowls overflowing with the wrath of an angry God.

I was never cut out to be a Christian evangelical celibacy role model. I have too much of a laissez-faire attitude. But the life I knew best was inside a church. My father was an ordained Presbyterian minister leading a non-denominational congregation and, as an adult, I made my way into various Christian communities out of habit and family expectation.

There is a certain level of shame associated with what people outside the church might consider acceptable behavior. So when, unmarried, I got pregnant for the first time, I called the pastor at his home and volunteered not to show my face around his church again. Lucky for me, I went to an unconventional church. His reaction: Everyone has problems, no one has time to fret over yours, see you Sunday.

But I was 27 years old, done with college, and pretty much a grown woman. What about teens who face a similar situation at 15, 16, 17? I wanted to intervene, use my life experience to help them, so I started a version of True Love Waits at the church by hosting sleepovers every Friday. It grew from eight girls to about 30, giggling and snacking in my tiny condo. There was music, nail painting and gossip with a short lesson right before bedtime. It was like Alcoholics Anonymous for pre-sexually active girls, with temptation sponsors and everything. There were several volunteers my age who would spend the night at my house with the girls and just be a touchpoint in their lives until the girls left for college.

While speaking at a community meeting about the emotional and spiritual success of the program, I caught the attention of a crisis pregnancy center looking for someone to work in pregnancy prevention. Duly recruited, I left my job at the church, after specifically asking if I’d have to chain myself to a tree or the door to an abortion clinic. No, assured the director. Those are extremists, we are nothing like them.

My technical job was abstinence education teacher. No condoms or birth control knowledge, just straight-up do not have sex before marriage. But I realistically billed myself as an education outreach director: Whatever needed to be taught in the realm of my expertise, I was there to teach it. Sure, sexual abstinence is the only 100 percent guaranteed method to prevent STIs and unexpected pregnancy. I said that, and I believed that. But I also talked about making good choices when it came to lying down with someone.

Never one to preach about sin and shame, my story was one of redemption. When my daughter Jordan was 11 weeks old, she was shaken by her baby sitter’s husband, first into a coma, then into a stroke, and she now has permanent brain damage. I would tell Jordan’s story to my audiences, not to gain pity or sympathy, but as a way to say that even if Jordan had died as expected, God would still be on my side. She lived and, through years of heavy therapy and recovery, God was still on my side. It was because of him that I had the mental strength to care for my daughter, get her to her appointments, love on her as she began to surpass all expectations.

I gained a strong reputation among the white Christian evangelical community for my talks about redemption and personal responsibility, and I began to be invited to various events designed to save inner-city kids from the biggest threats of their environment: premarital sex, premarital sex and premarital sex.

"You should have Erica come speak to your kids. She's black! And a single mother!" And, of course, a saint simply because my toddler was also a stroke victim with a traumatic brain injury. I was a walking testimony for overcoming obstacles through Christ, missing only, for the superfecta, a felony drug conviction.

No track record was ever asked of me, no longitudinal studies of how effectively my program leading the abstinence education program for a crisis pregnancy center was bringing down the teenage pregnancy rate in Texas or affecting marriage rates. I was a good speaker. Funny and charismatic, I knew when and how to make my adult audiences cry, how to make them appreciate my struggles, thus attracting more financial donors to their cause. Word got around, and I'd speak to classrooms and auditoriums full of kids. Sometimes I found myself on the floor, with a 10-year-old's head in my lap as I gently and respectfully shooed away years of shame.

It wasn't until this donor actually stood in the room with me at the Jammies for Jesus function that the truth of what I had been teaching these kids was finally revealed. I had been traveling to some parts of Houston that no nervous white person would ever enter in order to reach kids and adults with their message. For three years, I'd been telling kids the biblical translation of "if he's not worth your time, if you can tell right away he's pretty much an asshole, let's keep our consent for the next one who is worthy." I'd call the kids by name: "Is he Shauntae-worthy? Is he Mariana-worthy? Is he Monai-worthy?"

They understood me, they got it.

The Jammies for Jesus lady did not. After her myriad complaints to my executive director, I returned her donation out of my own pocket. I was tired of her bad-mouthing me in the community by which I earned an income for my daughter. No one needs shame and guilt thrown at them like gorilla shit in a cage just because some lady's idea of a perfect marriage and perfect pre-marriage life compels her to write large checks to support her judgmental habits.

Around that time, a depression I did not know I had began to show itself in various ways. The stress of caring for my daughter and the abstinence program teens was resulting in some questionable decisions. I was having sex with some rando dude when I was supposed to be attending a Bible study, for one thing. And even though, according to my own employer, “every child is a gift from God and deserves life while the mother should be loved and supported,” once I got pregnant as a still-single mother, this time with a son, while supposedly teaching sexual abstinence (but really teaching redemption and the power of God’s love), I was summarily fired. Go find God’s love somewhere else, the ministry seemed to be telling me.

It’s too bad the ministry felt it had to let me go, because those girls deserved real information and real solutions to actual conundrums, not a discussion about whether or not the bride should wear white on a wedding day that may not come until she's 38 years old with three kids and she's rushing to her aunt's house for her uncle to say a few words and just sign the damn marriage certificate so that when she leaves for Amsterdam the next morning, her new husband will have medical insurance and a legal relationship with the two out of three children who aren't his biologically, but whom he loves very much. (Maybe that’s just me. Marriage came when my first child was 13.)

I’ve lived outside the church since then. And I’ve found nothing but support and love and caring and a big “who cares?” to when and to whom my children were born. The True Love Waits kids I’ve been able to track, married or not, parents or not, seem very happy on Facebook with no word on their sex lives. They click “like” on photos of my bastard children.

Life is too complicated for a “just say no” campaign or a commitment to wear white on a wedding day. Love and acceptance, no matter the situation, should be found inside the church if that’s where some people need to find it. But if not, true love waits up the street.

Erica Hoskins Mullenix is a freelance writer living outside Houston. She is the founding editor of yeah write, a weekly writing challenge showcasing flash fiction and personal essays. Her personal blog is free fringes, and Erica currently has an anthology essay in the March issue of PANK Magazine.