A girl, a bear and the crisis of masculinity clash in this capable debut 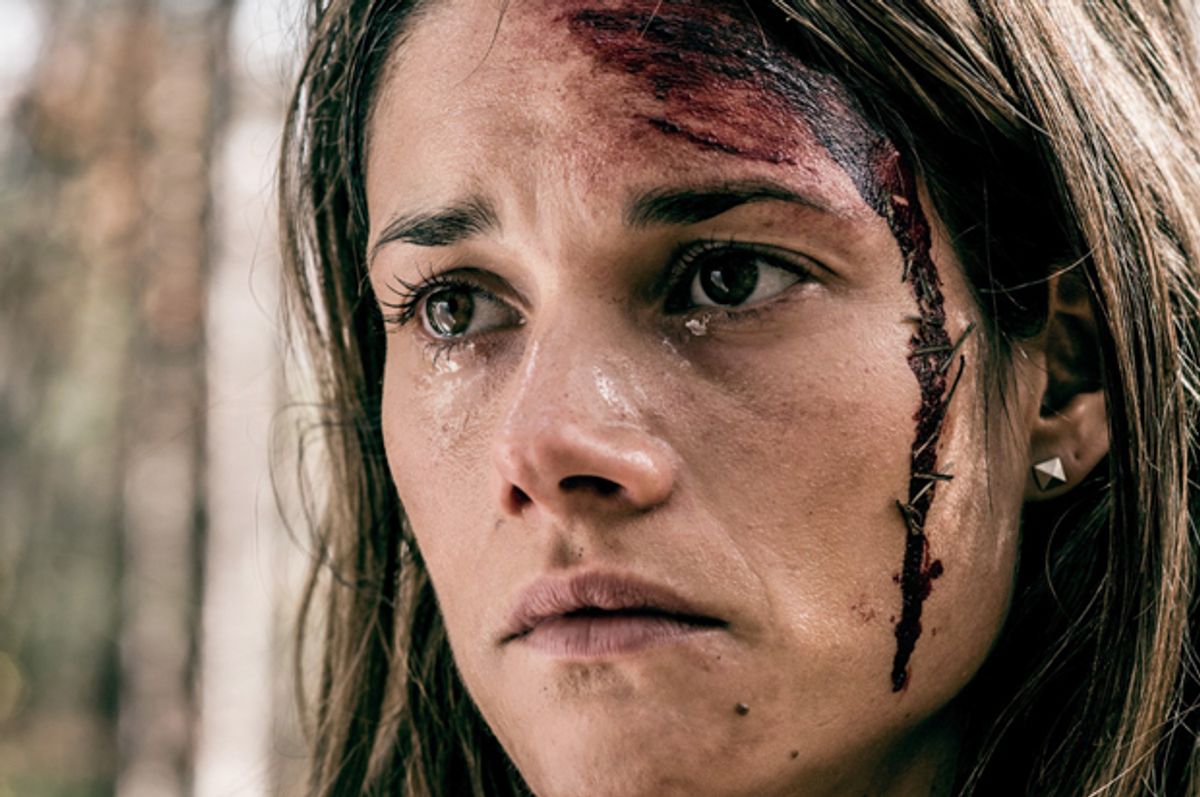 Thrillers about wilderness survival – or wilderness non-survival, as the case may be – feed on the most primal of human fears, the idea that all our so-called culture and civilization can easily be stripped away, and that once we get past the squirrels and the bluebirds nature is not our friend. There’s a fair amount of truth to this in terms of our species' history, of course. For most of the million years or so that hominids have roamed the planet, we lived by hunting and gathering amid a world that felt hostile and dangerous. The sick, the old, the young and the unwary among us often became prey, and it’s not unreasonable to assume that some genetic or instinctual memory of those long millennia still lingers.

So the appeal of a movie like Canadian director Adam MacDonald’s highly capable debut feature, “Backcountry,” in which a blithe urban couple on a backpacking weekend wanders into the territory of an enormous black bear who’s getting hungry for his supper, is not especially mysterious. There’s also a potent thread of sexual anxiety running through “Backcountry” that is somewhat more contemporary, although below the surface that too has elements of ancient superstition. This hair-raising outdoor adventure is presented as a fundamental challenge to masculinity, a test that the passive-aggressive girly-men of the 21st century are likely to fail -- but that a newly empowered 21st-century woman might just pass. That might sound contradictory, considering the presumed male-centric audience for this kind of film, but there's nothing especially subversive or unusual about it. I refer you to the extensive literature on horror movies, which have trafficked in various forms of crypto-feminism or “misogy-feminism” since the genre’s invention.

Even though the number of people attacked by wild animals of any kind these days is vanishingly small, especially compared to the carnage our species inflicts on itself, every individual bear attack or shark attack sparks a wave of lurid news stories and meditative documentaries and movies like “Backcountry” (which is based on a headline-making episode in Ontario). On one hand, this kind of narrative serves to remind us that we haven’t totally vanquished the natural world and it retains some of its ancient dangers. But on a deeper level, something more complicated and sinister is going on.

It’s idiotic to complain that thrillers are fueled by illogical and paranoid fears, I guess. That’s a little like saying that rom-coms have too many cute girls with gay best friends. But the particular variety of illogical paranoia at work in the wilderness thriller kind of bugs me. In the guise of telling us a story about nature and its perils – something that has surely been happening since the days when the hunters came home and told exaggerated tales around the fire – a movie like “Backcountry” can appear to justify our alienation from nature, and even our continued destruction of it. Dick Cheney and Woody Allen are both right (a sentence no one has ever written before): Nature is for pillaging or for avoiding, and any other attitude is naïve and sentimental.

As we watch corporate lawyer Jenn (Missy Peregrym) and her trendily stubbled boyfriend Alex (Jeff Roop) endure their camping trip to hell, should we not congratulate ourselves for our superior wisdom in staying home or going to the mall instead? Nature sucks! No wonder we’ve destroyed 98 percent of it -- and what a sense of relief we’ll feel once the last few scraggly acres of bear habitat have been paved over for a 7-Eleven.

I don’t mean to beat up on “Backcountry” in particular, which is an effective variation on this familiar theme, with a fittingly gruesome climax and a few cinematic flourishes that point toward deeper symbolic possibilities. MacDonald pitches Alex and Jenn on the precise midpoint between audience sympathy and irritation; they’re a maddeningly perfect couple with great hair and great teeth (at least on the surface), and at first we almost relish the prospect of seeing them pursued and mauled by Winnie-the-Pooh’s big, hungry cousin. Alex’s overconfident bluster is entirely responsible for their predicament: He’s planned this trip for months, and will be damned if he accepts a map from the ranger station! He knows this park like the back of his hand! (Well, OK, it was a while ago. Like, years.) He deliberately leaves Jenn’s smartphone in the car, because he’s sick of her damn texting! He refuses to turn back after smashing his big toe to pulp with the end of their canoe -- did someone say “emasculation”?

MacDonald has clearly seen both Roman Polanski’s “Knife in the Water” and Michael Haneke’s “Funny Games,” and maybe also Julia Loktev’s little-seen “The Loneliest Planet” (all of which explore the theme of outdoor adventure as crisis of masculinity). If “Backcountry” is a more straightforward thriller than those models, you can feel their discordant influence at work. Another way of reading a movie like this is that it channels our ancient hatred of nature while recognizing that it’s essentially nostalgic, and that the occasional hungry ursine cannot compete with the animal we really have reason to fear. Jenn and Alex’s first forest encounter is not with the bear but with a puckish Irish wilderness guide named Brad (Eric Balfour), who shows up in their campsite with a big knife, a string of big, meaty trout and no doubt other big appendages and accouterments we don’t get to see.

Brad’s interest in Jenn is obvious, as is his sardonic appraisal of Alex’s wilderness skills and overall level of manliness. But one of the great strengths of MacDonald’s script is that Brad remains largely jovial in manner; he presents a challenge to the couple, all right, but never anything close to a specific physical threat. He joins them for dinner, engages in a little uncomfortable banter around the fire and then goes away. Or does he, exactly? Jenn and Alex are sufficiently unsettled that it takes them way too long to figure out that it isn’t Brad tracking them through the woods the next day. At its most interesting and symbolic level -- abandoned once we reach the creatively staged bear attacks -- “Backcountry” suggests some subterranean fairy-tale alliance between the Irishman and the bear, as if Brad were some kind of shape-shifting spirit or genius loci, posing a set of existential riddles that this ill-matched couple in their expensive outdoor gear cannot answer.

“Backcountry” opens this week in major cities, and is also available via VOD from cable, satellite and online providers.