Americans concerned about Israel's influence on U.S. policy have it backwards. Bibi is doing our oligarchs' bidding 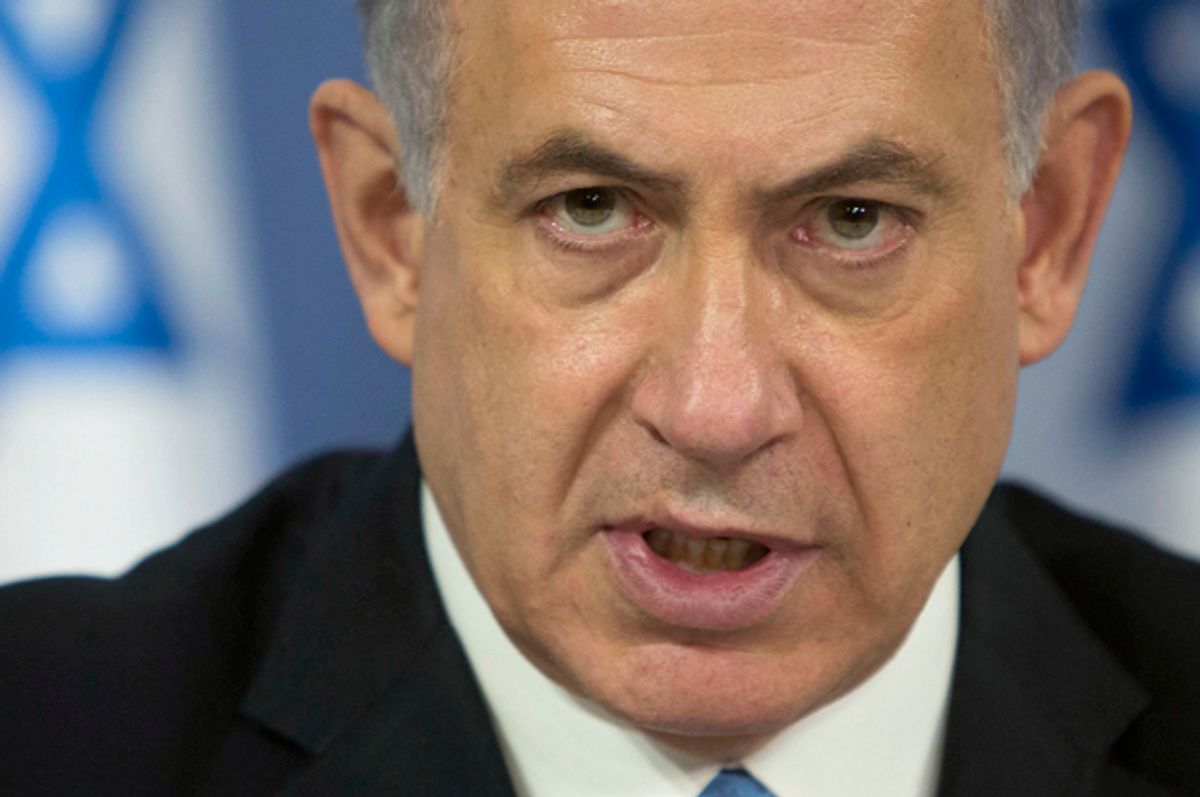 In next Tuesday’s election, is Binyamin Netanyahu, the Israeli Prime Minister, hoping to gain the upper hand by showing voters that he can influence U.S. policy – or by taking a hard new line on never giving up the West Bank? The answer to this question says a lot about which way influence really runs between Israel and the United States.

Netanyahu’s spit-at-the-White-House-from-Capitol-Hill speech has led some commentators to criticize him for running on a boast that he can bend at least Republican policymakers in the United States to his will. After all, they point out, he won at least a dozen standing ovations in Netanyahu’s address to Congress.

But Israeli voters have other, very practical, concerns on their mind – such as the affordability of housing and ever-rising income inequality. They are too smart and too cynical to believe the tired old trope that anyone in Israel exercises some kind of special influence over U.S. policy.

Intriguingly, Netanyahu knows that as well as anyone. And that suggests that what he’s really selling in this election is the other big piece of news his latest campaign has generated – his apparent repudiation of a two-state solution for Palestine and a promise to hold on to the West Bank.

Digging a little beneath the surface of both the speech to Congress and his Likud Party’s recent announcement that Netanyahu no longer supports a two-state solution shows powerful U.S. influences on Israel at work, which may not be in Israel’s long-term security interest.

Who benefits from Netanyahu’s speech?

Regarding Netanyahu’s speech, the real question is who benefits. Netanyahu’s principal financial backer, Las Vegas casino magnate Sheldon Adelson, has a very U.S.-centric goal – he wants to roll back the Obama presidency.

In case you missed it, back in 2009, despite the distractions of two wars and a financial collapse due to the financial crisis, the new U.S. president found time in May of that year to announce a crackdown on the use of overseas tax havens to evade U.S. corporate taxes.

That was one of the far too few measures taken by the Obama Administration to rein in illicit activities of Big Business.

Two very familiar billionaire names – both supposedly “concerned” about the broader politics of the country – were among the hardest hit. There were the two Koch brothers. They woke up to find their investment in Alberta tar sands suddenly subject to the kind of taxes only the little people are supposed to pay.

The other big name was Sheldon Adelson. Adelson suddenly had a problem repatriating the ample earnings of his Macau casinos.

The money behind the power

The Koch brothers declared war on the new president’s domestic agenda, while Adelson, who spent $100 million on Republican candidates in both 2012 and 2014, took on the other half of the sky: He declared war on Obama’s foreign policy.

Adelson has done a lot for Netanyahu, like subsidizing Israel HaYom, a newspaper devoted to boosting Likud’s hard-line policy and prime minister, whose free distribution has made it Israeli’s leader.

The beginning of the 2016 U.S. presidential cycle – the election of a new President is Adelson’s next opportunity to roll back enforcement of U.S. taxes on overseas earnings – was the perfect time for the magnate to call in a favor.

But surely, some might argue, Netanyahu’s speech reflected Israel’s security concerns about Iran. But did it? Just ask yourself this question: What alternative did Netanyahu propose?

No deal leaves Iran free to build nuclear weapons right away. In short, Netanyahu was helping Adelson by denouncing U.S. policy on Iran in Congress – not the other way around.

The one-state solution – but will it be a democratic state? Let’s turn to the news that Netanyahu no longer backs a two-state solution for side-by-side Jewish and Palestinian nations. It’s telling proof that Adelson’s sway over Netanyahu and all of the Likud Party is tremendous.

A two-state solution is the consensus route to a safe future for Israel shared by most U.S. Jews, all U.S. administrations and Israel’s security establishment. At least for a while, it appeared as if Netanyahu was on board with that. But Adelson never agreed and publicly denounced Netanyahu for his 2009 Bar-Ilan speech supporting it.

In early March, just as the polls in Israel tightened despite the Prime Minister’s excursion to Washington to address Congress, the Likud Party repudiated Netanyahu’s Bar-Ilan speech. Its press release noted all of a sudden that “Netanyahu’s entire political biography is a fight against the creation of a Palestinian state.”

This Adelson-inspired shift certainly puts in perspective the dismissal of Finance Minister Lapid in December 2014. He had tried to block a $76 million payment to two expanding settlements. Lapid has since declared that settlement funding is corrupt, citing payments to the Settlement Division of the Zionist Federation and the Samaria Council.

The number is plausible because it’s less than the amounts withheld from U.S. foreign assistance to Israel in 2003 and 2005 under a law prohibiting support for settlements in the occupied territories. Reuters reports $305 million for 2012.

But at least these are payments under the nominal control of Israelis. Stranger are the examples of private U.S. foundations like those of the Falic family (Duty Free Americas) and parts of the Schottenstein family (American Eagle Outfitters) that donate generously to both Netanyahu and settlement funds.

Is there a solution in sight?

Everyone agrees that settlements are making an independent Palestinian state in the West Bank unviable. But no one can explain how, as a single state, Israel can absorb over 2.5 million West Bank Palestinians, retain its Jewish character — and remain democratic.

Adelson holds no illusions. “So Israel won’t be a democratic state,” Thomas Friedman reports Adelson as saying. “So what?”

Given all those Adelson-inspired machinations, it is high time for Americans to stop being paranoid about Israel’s influence on the United States. Rather, we should ask whether we are becoming a bad influence on Israel.