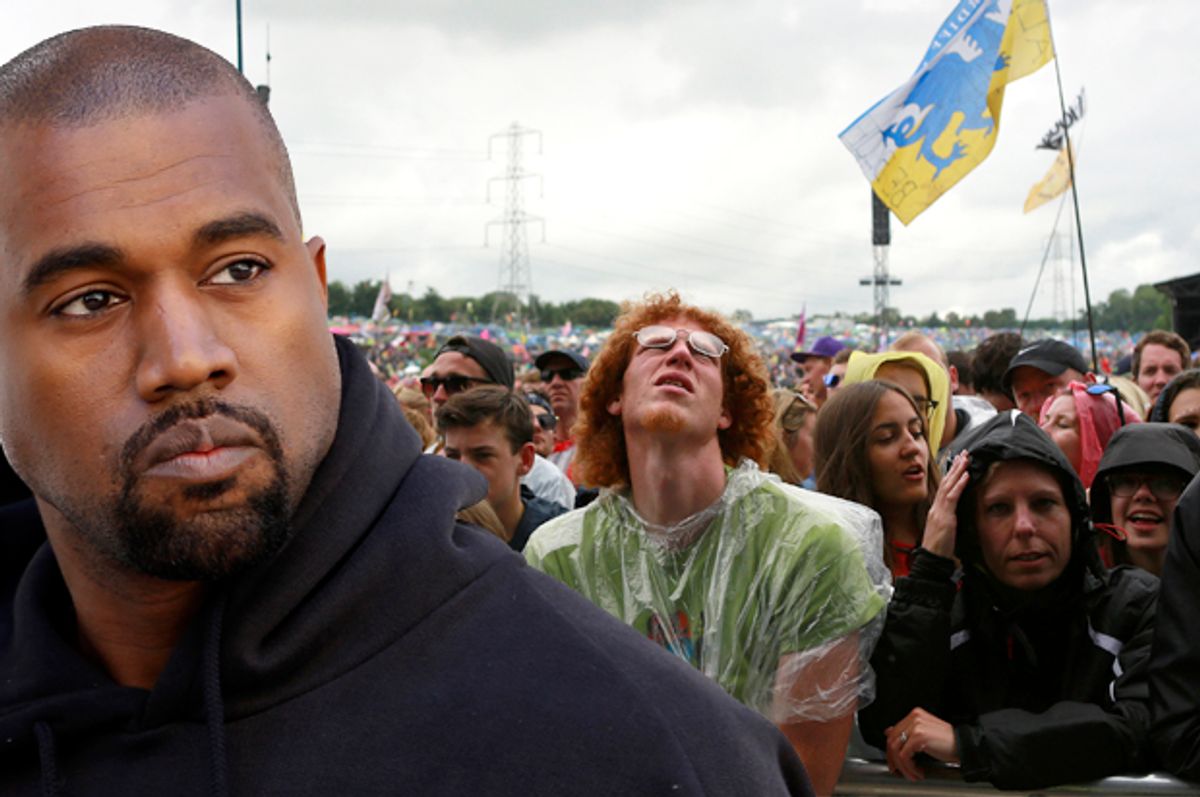 People were not happy with the news that Kanye West would be headlining this year’s Glastonbury festival — the UK’s largest music festival, which sees 135,000 festival-goers converge on Worthy Farm, in Southwest England, for one star-studded summer weekend each year. A change.org petition started by a Norfolk mann named Neil Lonsdale has already garnered over 50,000 signatures and a slew of angry comments. (Meanwhile, the “White People Angry about Kanye” Tumblr is seeing its highest flurry of activity since Beck-ghazi).

“Two years ago we had The Rolling Stones playing the Saturday night, and this year we get Kanye West?” Lonsdale told NME. “Glastonbury needs upbeat major artists. Glastonbury is an institution. It is expected that it has the biggest names. The biggest performers. Kanye does not represent that.”

This isn’t the first time that hiring a hip-hop act to headline Glastonbury has sparked outrage; Jay Z was the first hip-hop artist to headline the festival back in 2008, and it ignited a similar firestorm, with Oasis’s Noel Gallagher whining “Glastonbury has the tradition of guitar music," and "I'm not having hip-hop at Glastonbury.” (Jay Z had the last laugh, performing a historic, crowd-pleasing set that kicked off with a cover of Oasis’ Wonderwall). Even Beyonce's headlining gig got some backlash, back in 2011, as people bemoaned the continued “popification” of the festival (her set also kicked ass, naturally).

To be fair, no matter who headlines, there’s always controversy: Glastonbury is a uniquely English institution — it was originally titled the Pilton Pop, Blues & Folk Festival -- and  many feel that inviting major global pop and R&B stars to headline the festival is a bastardization of the show’s low-key folk arts roots. Yet this divisiveness plays to an unhealthy strain of rock purism — a retrograde fetishization of the Beatles/Stones/Who/Zeppelin model of rock-god artist that clings to a tired insistence that rap isn’t “real music,” completely dismissing the different, but no less valuable and difficult, musical skills that hip-hop composition demands (electronic music has faced similar criticisms).

It’s also hard to ignore the racial component of these sorts of remarks. As critic Amina Taylor wrote in the Guardian during the Jay Z flap, there is a disquieting undercurrent to some of the criticism about Jay Z’s appearance. “If hip-hop, the music that has been the soundtrack for my life, is not welcome, then I don't feel welcome either. There has never been any public outcry about black, non-guitar acts performing at Glastonbury (Dizzee Rascal, Al Green, Jimmy Cliff), just so long as they stay at the bottom of the bill. Know thy place. Move up to headline status and things suddenly take a different turn. Do well, but not too well; that will most definitely be held against you."

Or, as critic Jo Haynes wrote in her analysis of the Jay Z incident in her book "Music, Difference and the Residue of Race": “The support for rock was interpreted as a racist preference for white music and musicians, drawing on the historical associations between rock music, whiteness and Britishness.” Hip-hop is a distinctly American art-form; as Haynes suggests, the backlash speaks to a certain strain of anti-Americanism within the UK, that rejects the perceived Americanization of global pop culture and supports British acts as a form of cultural patriotism and a way of asserting Nationalist ideals (despite rock’s decidedly American origins).

Sure, there’s value in tradition — but things have changed a whole lot since Glasto launched back in the 1970s. Back then, the festival catered to an audience of 1,500, the ticket price was one pound, and there was free milk from the cows at Glastonbury farm. Now it draws 200,000 people who pay upwards of 200 pounds to see some of the biggest artists from across the globe, in all genres, in a three-day food, arts and music spectacle with its own city-sized economy. Likewise, the face of the music industry has changed substantially — hip-hop and electronic artists are global superstars, and it makes no sense for Glastonbury to pretend otherwise. To say that Kanye shouldn’t play Glastonbury because he doesn’t play guitar seems like a bizarre bit of retro conservatism that isn’t reflective of the tastes and desires of the majority of festival-goers.

Of course, Kanye comes with his own individual baggage, and maybe people just don’t want to see naked pictures of Kim -- swish! -- projected during the performance or are worried the scaffolding supporting the Pyramid stage will buckle under the weight of Kanye's massive ego. That’s another story. But if it’s about the music — and it should be — these sorts of silly, dated criticisms need to be put to rest.