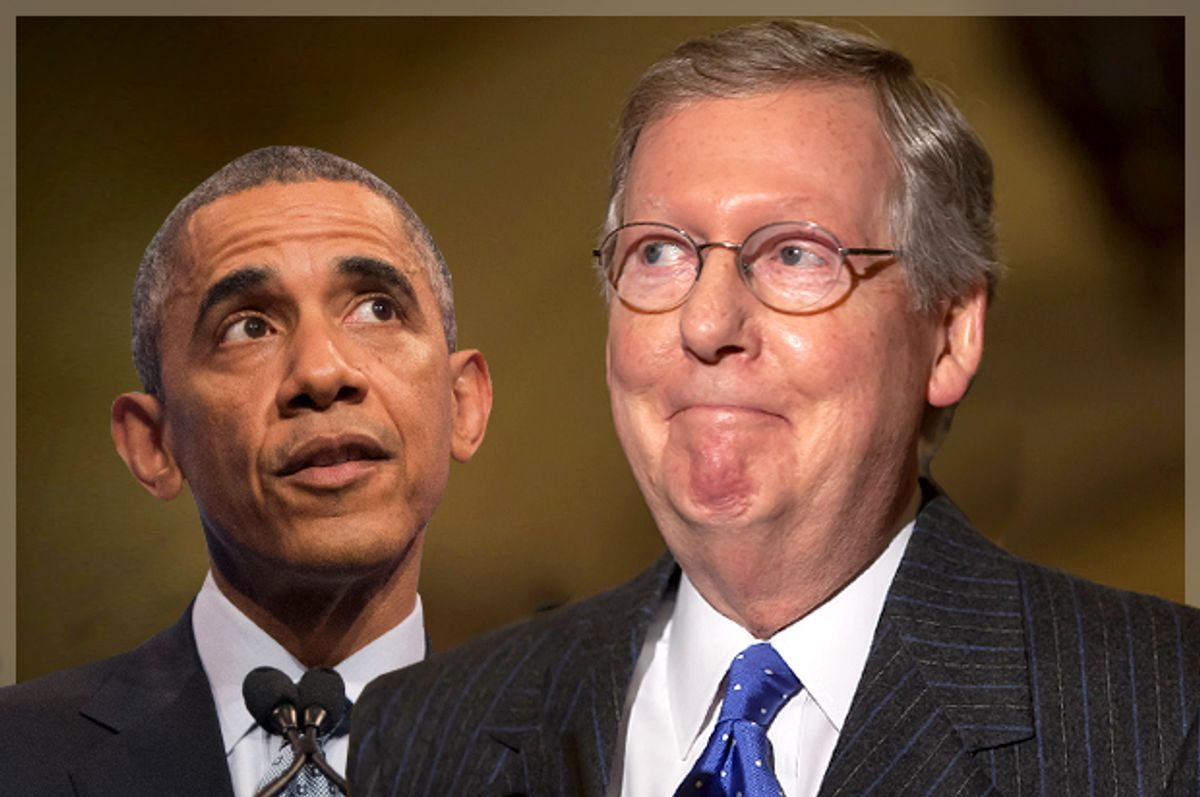 Mitch McConnell is a coal man. During his hard-fought 2014 reelection campaign, McConnell promised voters in Kentucky coal country that he would do anything and everything he could to battle back against Barack Obama’s “war on coal.” If it dirtied the air he’d be for it. If it polluted aquafers he’d support it. Coal ash in every stream and two black lungs in every chest cavity! Vote McConnell!

McConnell’s promise was that by taking on Obama and fighting the Environmental Protection Agency’s proposed regulations mandating steep reductions in carbon emissions, he’d help bring back Kentucky’s withering coal industry. What he conveniently overlooked is the fact that the Kentucky coal business owes its long, slow demise to simple economics: increased automation has drastically reduced the demand for labor; cheaper fuels, like natural gas, are steadily eating away at the overall demand for coal; and what coal remains in Kentucky is difficult to mine after over a century’s worth of enthusiastic digging. Rolling back a few EPA regulations won’t do much to change the industry’s grim economic outlook.

But that doesn’t mean McConnell isn’t a man of his word. He’s taking the fight to the EPA, but instead of going through Congress he’s leading an unusual effort to appeal to the states directly, encouraging them to resist implementation of the carbon regulations. McConnell’s campaign is strange not just because he’s forgoing legislation, but also because he’s straight-up asking the states to screw themselves over.

The EPA’s climate regulations ask states to submit their own plans for meeting emissions goals. If those plans aren’t in by next summer, the EPA will impose a federal plan on the noncompliant states. The thinking is that if a state develops its own proposal, it will be better tailored to the specific needs and unique characteristics of that state, whereas the federal plan will allow for far less flexibility and be more disruptive. McConnell’s plan is to encourage states to simply refuse to comply, subject themselves to the federal regulatory regime, and trust that the EPA’s climate plan will be invalidated by the courts.

That’s a tough sell. The governors who would be most inclined to fight alongside McConnell are the conservatives who believe that climate change is a giant hoax. McConnell is asking those same small-government conservatives to invite a stronger federal regulatory presence into their states, albeit temporarily. If those same governors are apt to believe that the regulations will eventually be invalidated, as McConnell argues, then it would seem to make more sense to work to minimize their impact up to the point that they’re tossed out. Just yesterday the National Governors Association announced a new program to help the states prepare their plans for complying with the EPA regulations – one of the states leading the program is deep-red Utah.

Even some supporters of McConnell’s efforts are wary of what he’s proposing. National Journal noted yesterday that “regulators in McConnell's home state have said they have concerns about subjecting the state to a federal plan.” Earlier this month, The New Republic’s Rebecca Leber contacted Harvard law professor Laurence Tribe, whose opposition to the climate regulations features heavily in McConnell’s campaign, and he said the senator was asking too much of the states:

Tribe told me McConnell’s advice for states to wait until courts litigate the issue is “not really helpful.” "The problem for Kentucky and many other states—and for the electric power businesses operating in those states—is that they can’t count on my being right,” Tribe said. He said "the uncertain legal environment puts many states (and employers doing business and providing jobs in those states) in an impossible position: either gamble that the rule of law will prevail [...] or give in now and act cynically to minimize your potential losses."

Then again, state-level Republicans have recently demonstrated their willingness to put ideological fights ahead of the interests of their constituents. McConnell’s EPA war has echoes in the conservative opposition to Obamacare, which saw state-level Republicans vigorously resist implementation of the law – to the detriment of state residents – on the assumption that it would be struck down by the courts. And given that there’s still a chance of that strategy paying off, state Republicans may be willing to join McConnell in his fight for coal rights.