F**k everything, I'm staying on the couch today: I fled the corporate world to do nothing

At 32, I left a VP job for part-time lollygagging. Was I exhausted by a demanding gig, or embracing my true nature? 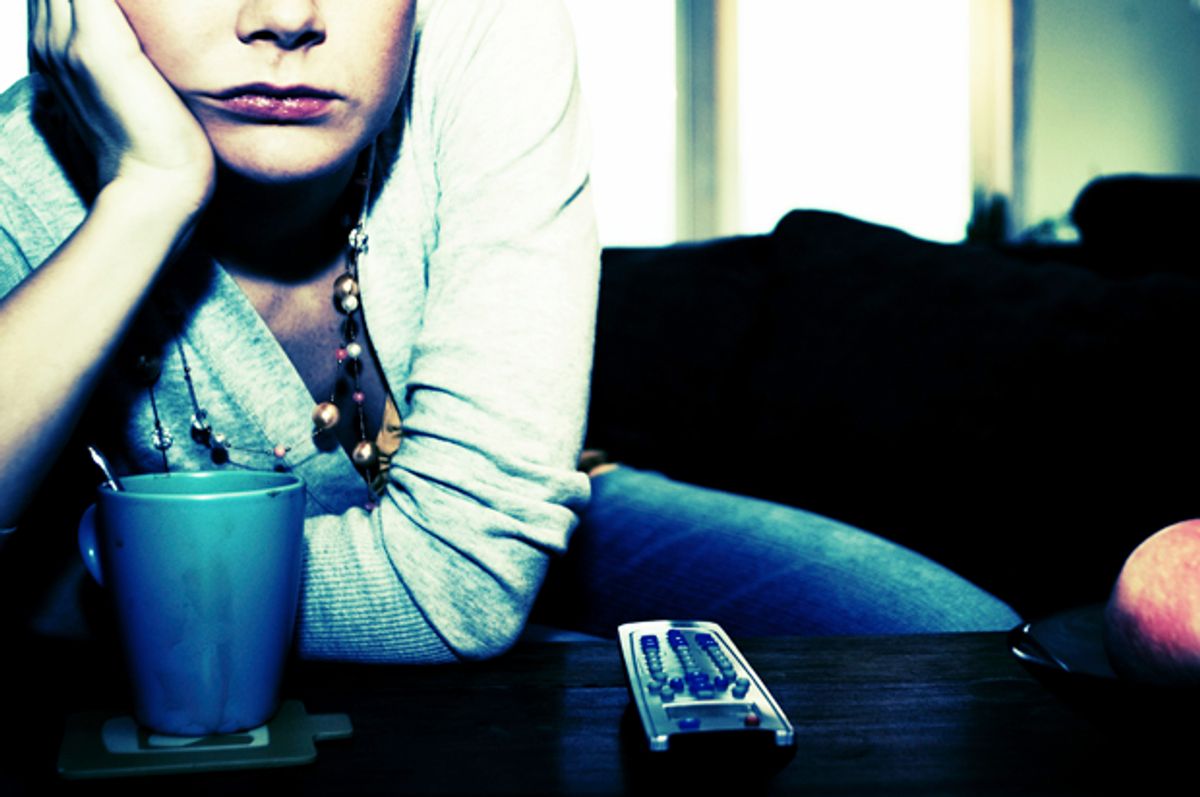 I used to beat myself up for not working out enough, or having one beer (or five) too many. Simpler times, those were. Job stress? Not really. Ten extra pounds? Whatevs. Not accomplishing things -- that's what's killing me lately. Forget gorging on a cheeseburger and fries followed by a slice of cheesecake. These days my greatest indulgence is doing nothing.

Things I currently need to do but can't quite make myself do include: adjusting the contributions to my 401K, networking, finding a new health insurance plan, getting new tires on my car, catching up on unread New Yorkers, writing overdue thank you notes, washing my bed skirt, flipping the mattress.

It's not that I don't enjoy idle time. I love it. But I can't escape the feeling that I should be improving my life right now, getting organized, simplifying my routines, creating platforms for future income, educating myself, getting smarter, getting better.

There are entire publications dedicated to the subject. Lifehacker is one. "Tips, tricks, and downloads for getting things done." That's the idea behind the entire site, which is based on the premise that our lives have gotten so complex that we're all in need of its services. Recent headlines include "Four Low-Risk Ways to Generate Passive Income and Make Your Money Work Harder for You" and "Better Sleep in Your Car." Lifehacker has 283,938 fans on Facebook, and that's just a fraction of its readership. Are our lives really so complex? Or is it just that our lifestyle demands are out of whack with our true nature?

The sad irony is that I don't even have a full-time job. Oh sure, I work for a living, but as a freelance public relations consultant for Internet companies, I sometimes log as few as 10 hours a week. I should have plenty of time to get tasks done. But I lose so many hours to lollygagging. A longer-than-anticipated hike on a sunny afternoon. A morning drinking coffee and reading blogs. An hour outside reading a magazine.

My habits stand in stark contrast to those of my father. At 65, he can't bear to be still for more than five minutes. This has become especially clear lately, as he recovers from knee replacement surgery. For the first two weeks, he barely left his bed. After that, he could only move with the help of heavy painkillers. I've never seen a man more miserable in my life.

You'd think a major surgery like that -- where they actually shaved off the bottom of his femur and the top of his tibia and drilled holes in them to insert titanium screws -- would focus a person on what matters: getting better. But his to-do list is as long as ever. It fills the front and back of three index cards, getting longer every day. My father has been a runner and an athlete all his life. He's raised nine children, six of them boys, and worked up to three jobs at a time for the last 40 years. But it seems there is one thing he cannot do: relax so that he can heal.

My youngest sister, Caity, discovered this recently when she took a leave from work to provide emergency care. After two weeks, my father had made no progress in his recovery, and on the surface, it didn't make sense. He only had to do five sets of 15-minute exercise intervals per day. What was going on?

From the minute she arrived, my dad bombarded Caity with directives. Run the sweeper. Restack those magazines. Wash the sheets. Wipe down the granite countertop with the special granite countertop cleaner and dammit don't use regular Windex. Dust in the dining room. Sort the mail. If Caity wasn't up by 8 a.m., she'd hear him banging his walker around at the bottom of the stairs. There was work to do, dishes to wash, breakfast to make, trash to be taken out. Having Caity around to do these chores -- my mother couldn't be bothered, but I'll get to that in a minute -- was what ultimately put his mind at ease enough to concentrate on his therapy. Before he could settle down and do nothing -- he needed to know that something was getting done.

The story was a revelation to me. I grew up thinking I was lazy. I berated myself for not having accomplished more, for not being in better shape, not being as financially disciplined as I could be. My dad was the model against which I judged myself. He created a formidable family, climbed to the upper rungs of the corporate ladder. I'd admired and resented him for his ruthless efficiency and ambition. But it struck me that his success might not be due to discipline so much as a kind of helpless workaholism. In other words: He's not trying to be like this; he just is. If my father isn't constantly productive, he starts to go a little nuts.

Is that the kind of personality required to be "successful"? I used to be one of them, sort of. By the time I was 31, I was a vice president of public relations at one of the world's largest banks. I could scarcely believe it myself. Eleven years of climbing the ranks, being on call at all hours of the day. Fifty-plus-hour work weeks. Countless exercises in crisis management, anything to keep a client happy.

But in the summer of 2009, almost 11 years to the day after I started working, I crashed. I'd been crumbling for a while. I had switched to a job as a V.P. at a major public relations agency, having decided the bank was too stodgy and lame. I thought being in a more creative environment would help me feel engaged and therefore energized. But I shudder to admit, it wasn't the work I couldn't handle. It was the workload.

I just didn't feel up to the task of intense concentration all day, every day. It sapped my energy, leaving me with nothing for my personal life, which needed improvement. I was 32, single and didn't date often -- troubling, considering I wanted a family.

Desperate, I began seeing a therapist who helped me see how depressed I was. She suggested I take a leave of absence from my job and told me that legally and with her permission, it was possible. It wasn't a decision I made lightly; it made me very nervous to give up the corporate hustle after having bought into that life for so long. It may have been draining, but it also had a lot of perks. Status. Stability. Great health insurance. Money for plane tickets to Miami, Mexico and Paris.

But I took a break. And I discovered that left to my own devices, I could pass the time doing nothing more taxing than reading, going for long walks or hikes, thrift store shopping, sleeping and embarking on pet projects like painting my living room or trying my hand at writing a screenplay. I had some compulsion to get things done, but nothing like my dad's. In fact, what I began to realize was that I was far more like my mom than I'd ever realized.

My mom is a loafer. Now that she's settled into retirement, I feel like I'm finally seeing her true essence. She reads at least five books a week. She plays games like Scrabble and slot machines on her iPad. She stays up late watching '80s movies on cable and TV shows like "The Closer" and "Justified" and then sleeps till 10. She occasionally goes to lunch with a friend or attends a meeting of her book club, but otherwise she's happy staying home and waiting for one of my siblings to come visit with the grandkids. Any chores she's responsible for get tackled at the absolute last minute, when they can't go another second undone. This is not a person who would be frustrated while recovering from surgery. She'd be excited at, say, the chance to reread all the Sue Grafton alphabet mysteries back to back. I'm not saying she's lazy -- having raised nine children, she was far from it -- just that now that she can, she prefers to chill out.

I sometimes wonder how her people survived evolution. I don't wonder this about my father. He comes from tough, wiry and determined folk. They are survivors. Hunters and gatherers. But my mother's lot is sedentary. She and her siblings enjoy sitting around my grandmother's living room in Kentucky, eating potato chips and telling stories, happy to be near each other and jawing away a few hours. These are round people. People who know their baked goods.

What role could these people have filled in a primitive society? Eaters of the snacks? Reluctant doers of the laundry? Let's say they served as the bards, people who kept the oral traditions alive and provided levity necessary to keep their fellow humans going when times were tough. Which makes it even more remarkable that they made it to 2011. They couldn't rustle up a meal in a barren forest; they had to play the emotional cards necessary to live off the people who did.

And then I think: Wow, these people are my people. No wonder I didn't last in a demanding executive position. I can get things done, but my productivity has limits, and when I go beyond them, I start to shut down. Today's business climate doesn't really allow for regular dilly-dallying, for leisurely cheese dip eating and sitting around with one's co-workers discussing the events of the day. There are emails to answer, project plans to follow, presentations to draft, expense reports to file, sales pipelines to track, news digests to read, results to measure. A truly endless amount of busy work.

So two years after fleeing the corporate world, the question now is how to find a life in the middle. I know this is what most of us want: not the high-octane world of my father or the extreme leisure enjoyed by my mother, but to have a job that gives us enough time to screw around on Facebook and take a proper lunch break. (Though speaking of Facebook, it certainly intensifies my feeling that the rest of the world is out there grabbing life by the balls, while I sit here thinking about my next iPhone Scrabble move.)

I don't know that I'll ever stop feeling bad for not being a Type A personality. Or worrying that I'm not accomplishing enough. After all, I do want to own a home some day, and to retire when I'm old, and not to stress about how I'll afford kids. But maybe for now, I should enjoy my idle time. Sit around talking to my aunts and uncles about the absurdity of it all. It may not get me anywhere. But maybe for right now, at this second -- here is where I'm meant to be.

Sara Campbell is a Los Angeles-based freelance writer and PR strategist who has strong opinions about pretty much everything. She fritters away a lot of time on Twitter, where you can follow her @ janedonuts.