Atheists' self-defeating superiority: Why joining forces with religion is best for non-believers

Prominent atheists like Bill Maher and Richard Dawkins judge people of faith. Here's why it's a recipe for failure 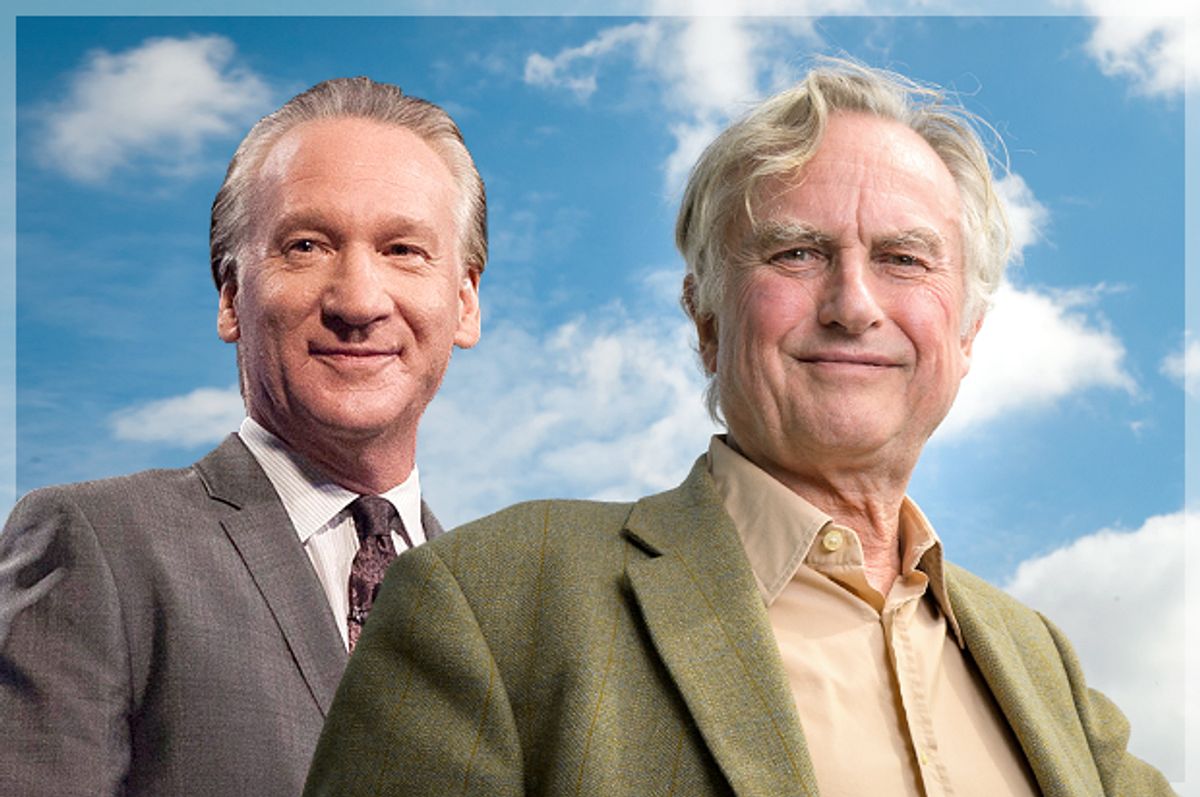 I've written before about the root causes of religious conflict — in a nutshell: it is not about what many people would like you to think it's about — but I realized recently that I had still been missing part of the picture picture, because I wasn't accounting for what happens when people get caught up in narrowly tribalistic thinking. If there’s ever going to be a genuine, durable peace in the world, we have to overcome this tendency. And we atheists have to realize that we’re subject to the same pull of tribalism as are religious believers.

Yes, religion has been a source of conflict for millennia—but religion is just an especially organized form of tribalism. Human beings come by it honestly. As social psychologist Jonathan Haidt observed in his book "The Righteous Mind," “our ancestors faced the adaptive challenge of forming and maintaining coalitions that could fend off challenges and attacks from rival groups” for eons. It may even be in our DNA.

New Atheists like Sam Harris, Richard Dawkins, and Bill Maher — with their legions of followers, numbering in the millions just on Twitter — continue to employ the Us vs. Them rhetoric of tribalism. But what these New Atheists fail to realize is that even if their criticisms of religion are correct, pointing them out does nothing to combat tribalism—in fact, it only strengthens it. Their faith in the power of rationality, which is effective but not perfect, blinds them to the larger problem.

This isn’t surprising, because science has convincingly shown that individuals don't really reason well on their own—our rationality is unreliable because of the pervasiveness of motivated reasoning. This suggests that the only cure for our cognitive biases is other people. The problem is that we’re more receptive to alternatives only when challenged by members of our own tribe. Atheists as well as religious believers are relatively immune to attacks from those “other” people.

So what are we to do? Ironically, we have to expand our notion of what our tribe is—with the ultimate goal of expanding that notion so wide that the tribal concept vanishes altogether. We have to bring people together who will challenge each other’s positions while also being bound by having something in common, a common purpose or a set of common values.

My fellow atheist blogger at Patheos, Adam Lee, recently noted that “atheist groups, especially atheist student groups, are increasingly joining forces with other social change movements and emphasizing how their goals and ours intersect” in order to combat social conservatives who use religion as justification for inequality. That’s a great start, and Lee is correct— that kind of cohesion makes us stronger.

Lee goes on to say that “when we look outward, beyond the borders of the atheist community, the same principle holds: The way to win political battles is by finding and making common cause with allies.” Lee says that atheists’ natural allies are in the progressive movement, most prominently LGBT rights groups and feminists, because they have most often been the targets of religious harassment and oppression.

But I’d like to encourage my fellow atheists to push the circle of our tribe out a little bit further than that. Combining the forces of secularism with the progressive religious movements of the various Abrahamic religions, for example, can achieve even more than we can by ourselves. Forget about disabusing believers of their core convictions with the “universal acid” of rationality—the best way to fight for social justice and pluralism is to ally ourselves with those who share the same values, regardless of their metaphysical beliefs.

This is relevant now because we’ve never had an opportunity like this before. The great decline of religion in America doesn’t necessarily mean that people are becoming atheists; it more likely means that more and more people are adopting more liberal views of the traditional religions. And there are progressive believers out there who would welcome the chance for atheists and believers to work together towards common social justice goals.

One of these is Benjamin L. Corey, who has a Master of Arts in Theology from Gordon-Conwell Theological Seminary and is the author of"Undiluted: Rediscovering The Radical Message of Jesus."

As Corey recently told me,

"We must learn to recognize that all social groups—regardless of religious belief or lack thereof—bring something to the table that is worthy. Coming together to pursue peace, justice, equality, and all the other values we hold in-kind, we find that if we failed to partner together we would be dismissing friends and allies on a wide array of issues."

He acknowledges that atheists and believers may never see eye-to-eye on everything, but he believes nonetheless that we can find common ground on many values and, like Patheos' Adam Lee, believes that those of us who stand for the same values are stronger together than we are apart. Another Patheos blogger, Dilshad D. Ali, manager of the website's Muslim Channel (and her own blog, Muslimah Next Door) has been writing about Muslims in America for more than a decade, and is equally receptive to expanding our tribal wall to the vanishing point.

Ali told me that "wanting to share a more more moral secular community, that atheists should work together with the progressive and/or liberal elements of different Abrahamic faith groups could work very well, as a lot of the core beliefs and practices of faiths centers around moral living, basically putting good out into the world as opposed to evil or bad.”

Like Corey, Ali believes there are many who would be happy to work with atheists as well as those of other faiths on common projects and issues. She also notes that we may not all agree on each and every issue or cause. But as she and Lee both emphasize, there is plenty in the name of good, moral living that we could all come together and work on.

“The more that the atheist community moves beyond purely philosophical debates to embrace the practical pursuit of justice," said Lee, "the more we can establish a reputation for ourselves as a force for good in the world.”

But perhaps the biggest boon of atheists allying themselves with more liberal or progressive believers is that it will serve as a catalyst for even more change. We should see a softening of the positions of the “militants” on both sides, precisely because human beings are more receptive to messages from those with whom we share a tribal badge.

This will have the effect of a universal acid that will eventually break down the walls of tribalism altogether, clearing a path for a truly pluralistic society.