NYT columnist urges us all to the pews, but the Bible can not help us live 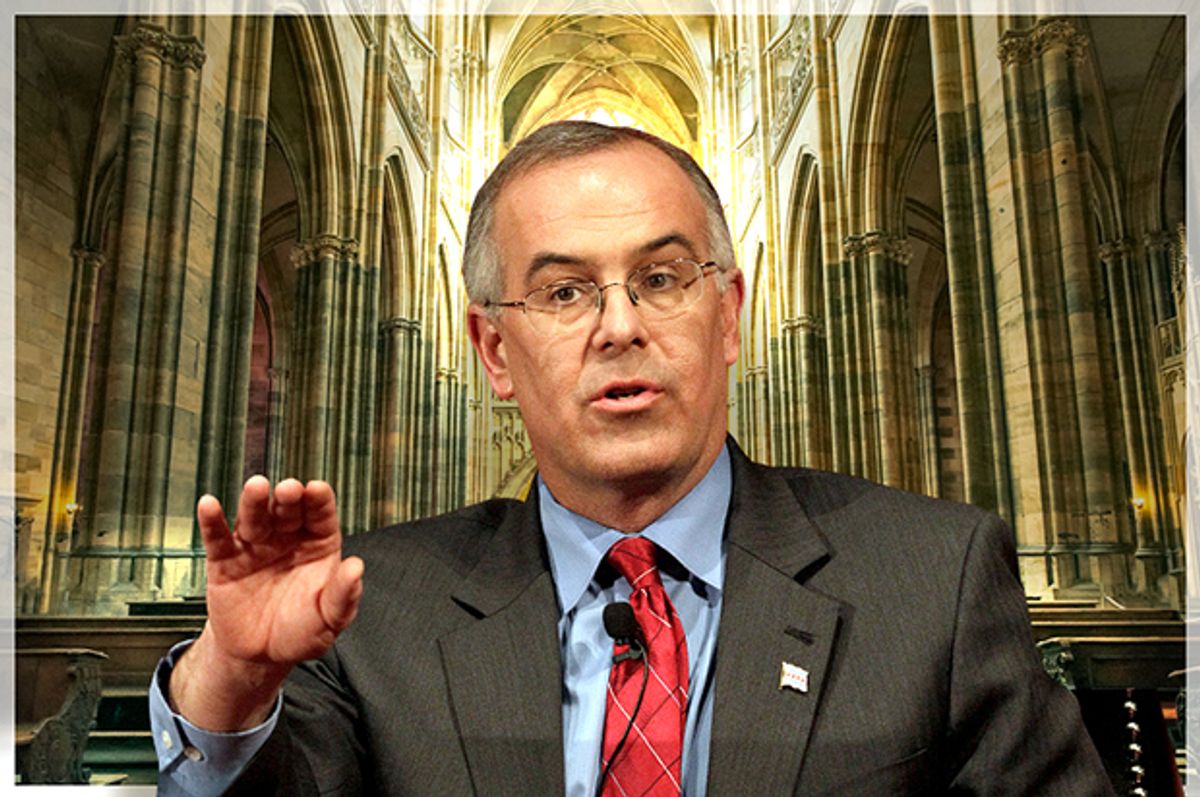 We are, it is generally recognized, suffering through an era of crises – political, civilizational, biological and environmental.  Money has so perverted our electoral system that, according to Princeton University, we now live not in a democracy, but in an oligarchy.  Republican senators, poisoned by partisan spleen, dispatch an unsolicited letter to the leaders of Iran and treasonously subvert President Obama’s bona fide negotiations to thwart the possibility of that country’s developing nuclear weapons.  Islamist terrorists slaughter innocent cartoonists in the heart of Western Europe.  Drug-resistant microbes threaten to leave us without effective antibiotics, and a once-rare hemorrhagic fever devastates entire swaths of West Africa.  Climate change poses dangers to humanity’s future so grave that it worries the Pentagon and the European Union.

Anyone can browse the headlines and add even more troubles to the list.  All these problems speak to the sad reversibility of hard-won progress, to our shattered political systems, to our vulnerability as a species before the caprices of nature, and, let’s face it, to the rank selfishness and out-and-out stupidity of our fellows.  We already know how to deal with at least some of the above woes, but for a host of reasons, we find ourselves paralyzed, unable to do anything much but watch them worsen.

There are also less momentous concerns -- societal ills in America, to be specific – to worry about, and these especially bother the New York Times columnist David Brooks.  In a recent Op-Ed, "The Cost of Relativism," he proposes a remedy.  But he plays coy and does not tell you straight out what it is.  So I will.

Brooks starts his column by decrying what he sees as our banes -- single motherhood, slack parenting, a fall in church attendance, what once was called “juvenile delinquency,” and even clubbing and sex, all of which lead, as he puts it, to an “anarchy of intimate life” and “family breakdown.”  A book by Harvard University professor Robert D. Putnam, "Our Kids," arms him with the stats and anecdotes he needs to arrive at this judgment:

“The health of society is primarily determined by the habits and virtues of its citizens. In many parts of America there are no minimally agreed upon standards for what it means to be a father. There are no basic codes and rules woven into daily life, which people can absorb unconsciously and follow automatically.”

To set things right, Brooks proposes “reintroducing norms” – a task that will “require, first, a moral vocabulary.”  Says he, a “plague of nonjudgmentalism” destroyed these norms, which “need repair up and down the scale, universally, together and all at once.”  To accomplish this, we need, it follows, judgmentalism, a “holding everybody responsible.”  We also need to be more “morally articulate,” and devise “clearer definitions of how we should be behaving at all levels.”

Such rectitudinous generalizations hardly warrant a response, but those familiar with Brooks’ work understand what the provenance of the aforementioned morality is likely to be, and that does deserve rebuttal.  He hints at it, reminding us of times of “moral revival” when “behavior was tightened and norms reasserted.”  He has in mind, he says, “England in the 1830s and . . . the U.S. amid economic stress in the 1930s.”  He suggests we engage in an “organic communal effort, with voices from everywhere saying gently: This we praise.  This we don’t.”

What in those two disparate, long-ago decades is to be emulated Brooks doesn’t say.  But let’s think a bit.  In the United States, the Stock Market Crash of 1929 brought to a quasi-apocalyptic close the famously fun, culturally effervescent rip-Roaring Twenties.  I know of no “revival” in the decade that came afterward, nor do I see any moral tutelage Brooks would wish us to extract from one of the bleakest, most hardscrabble times in our history.  Moreover, the repeal of Prohibition in 1933 constituted a triumph of rationalism and realism over the faith-besotted killjoys who helped get the restrictions on tipple passed into law 13 years earlier.  Hardly “Brooksian,” that.

But what of “England in the 1830s”?  The badass sensualist poet Lord Byron and his fellow atheist versifier Percy Bysshe Shelley had just tragically departed this world for the Eternal Void.  The novelists Charlotte, Emily and Anne Brontë were coming of age, and would produce such wonders as "Jane Eyre," "Wuthering Heights" and "The Tenant of Wildfell Hall."  Samuel Butler, author of "The Way of All Flesh" (a moving, must-read semi-autobiographical account of a journey from religious belief to atheism), was born.

None of this sounds very Brooksian either.  But what must have been Brooks’ moment came in 1837, when a certain queen ascended the throne – a stern, pudgy, bedizened sourpuss by the name of Victoria, the standard-bearer, of course, of Victorian morality.  Just Brooks’ kind of queen, we might think, though the discovery of her private passion for drawings of naked men eventually revealed her to be less of a wet blanket than was commonly understood.

The only bright spot – and it was a considerable one – came in 1859, when Darwin’s "On the Origin of Species" hit the bookstands and accelerated humanity’s journey away from the practice of sacred superstitions and belief in magic books toward truth and science, progress and light.

Why doesn’t Brooks come right out and say he’s advocating a return to horse-and-buggy priggishness?  Surely he fears ridicule.  He does tell us that by steering his column in such a “spiritual and moral” direction, he hopes to coax us toward “social repair.”  From a glance at his other recent Op-Eds (see here and here, for example) that promote religion and sideswipe secularists, we can surmise that he’s prodding us, after all, to head for the pews, where, under the glare of some beetle-browed rabbi, priest or pastor, we are to imbibe salutary lessons from the “Good Book” in one or another of its confessional permutations.

In a Salon column I wrote not long ago, I covered the perversion and debauchery riddling the “Good Book” that make it anything but.  There is precious little, if any, valid moral instruction in this plethoric tome that we might, as Brooks says, “absorb unconsciously and follow automatically” to solve the problems he cites, which are, essentially, child-rearing, violence, sex, delayed gratification (“long-term good,” as he puts it) and the “anarchy of intimate life.”

But let’s assume you do consult the Bible for guidance on how to live.  You would have to exercise an abundance of caution in selecting nuggets of heavenly “wisdom” for this purpose, lest you lose custody of your children in juvenile court, or commit atrocities and land in jail.  But first, temper the filicidal impulses that the Good Book, in Proverbs 19:18, assumes you harbor, and “do not set your heart on putting [your son] to death.”  Otherwise, keeping in mind that your kid could call the cops on you, let fly that rod, as countless other verses ordain.  To wit: Proverbs: 20:30: “Blows that wound cleanse away evil; strokes make clean the innermost parts,” of your children.  And (ibid) 23:14-15: “if you strike him with a rod, he will not die.  If you strike him with the rod, you will save his soul from Sheol [Hell].”  If your son, in a fit of pique, should tell you “go to Sheol!” do, however, ignore Leviticus 20:9, which commands you to put him to death.  Also, guard your daughter’s virginity until she marries; otherwise, if her groom is a Bible nut, he may, on her wedding night, return her to your front yard for you to stone to death, as Deuteronomy 22:21 bids.  Acting out either of those verses could bring the police to your doorstep.

But there’s more to disobey.  If you catch your child muttering swear words against God, you might want to defy Leviticus 24:16, which calls upon you to assemble your fellows and, yes, stone him or her to death.  Death also happens to be the punishment for extramarital shenanigans, as enjoined in Leviticus 20:13.  And of course among the gravest offenses against the Lord is working on the Sabbath, says Exodus 31:15.  The punishment?  What else?  Death.

The New Testament is generally regarded as more clement than the Old.  However, Romans 1:29-32 reminds us that if we know God’s law and break it, we deserve to be executed.  But if Matthew 5:18 is to be believed, God’s law includes every single savage punishment prescribed by the Old Testament: “until heaven and earth pass away, not an iota, not a dot [of the Bible], will pass from the Law until all is accomplished.”  Two Timothy 3:16 tells us that “All Scripture” – all – “is breathed out by God and profitable for teaching, for reproof, for correction, and for training in righteousness.”  Nowhere in the New Testament is it written that Christians are to ditch the 1.0 version of their faith; there is not a single instance of scriptural sanction for discounting some chapters of the Lord’s legislative handbook and obeying others.  No god so persnickety about his dots and iotas would let his subjects decide such matters on their own.

If religious folk want to be canonically consistent, they really should have the guts to enforce the Bible’s punishments, stones and all, on transgressors, including members of their own families.  Better to live just as the Good Book says, and not according to wishy-washy New-Age interpretations available at university religion departments everywhere.  Incidentally, one A. J. Jacobs tried to implement the Bible’s dictates to the letter, if only for a year.  His resulting 2007 memoir, "The Year of Living Biblically: One Man's Humble Quest to Follow the Bible as Literally as Possible," is, sadly for the sincerely faithful, a comedic masterpiece that attests to the stone-age unsuitability of the Holy Scripture as a textbook for getting by in the modern world.

In any case, to develop our morals, we never needed a divine credo delivered in tablet form from on high.  Had we not learned to control our comportment at least enough to benefit by the company of our fellows, we would not have survived as a species, neither in the tropical forests from which we came, nor in the savannahs to which we migrated.  We thrashed about in no chaotic Hobbesian bellum omnium contra omnes, murdering one another, getting it on with our cohorts’ spouses, thieving and lying and lustfully eyeballing other folks’ livestock and domestic help, until Moses stepped off the mount with his hallowed Decalogue and saved us.  If you doubt this, Google “core morality” and “evolution” and discover the evidence for how natural selection has fostered self-imposed restraint on our behavior; that is, morality.  With obvious glitches here and there, and, at times, major disruptions, such morality is, in fact, “absorb[ed] unconsciously and follow[ed] automatically.”  And with no thanks to Moses.

Sorry, David Brooks, we the happily godless will no longer countenance nonsense preached to us de haut en bas by religious folk who presume to have the upper moral hand.  At least in the United States, the prelapsarian era of the 1950s and before is, thankfully, gone, and new times, as troubled as they are, are upon us.

There is no going back.  Get used to it.