This is all my fiancée's fault: The engagement photo I can't believe we actually took

Planning a wedding can be so tedious and joyless for a couple. Here's how we reminded ourselves to be goofy in love 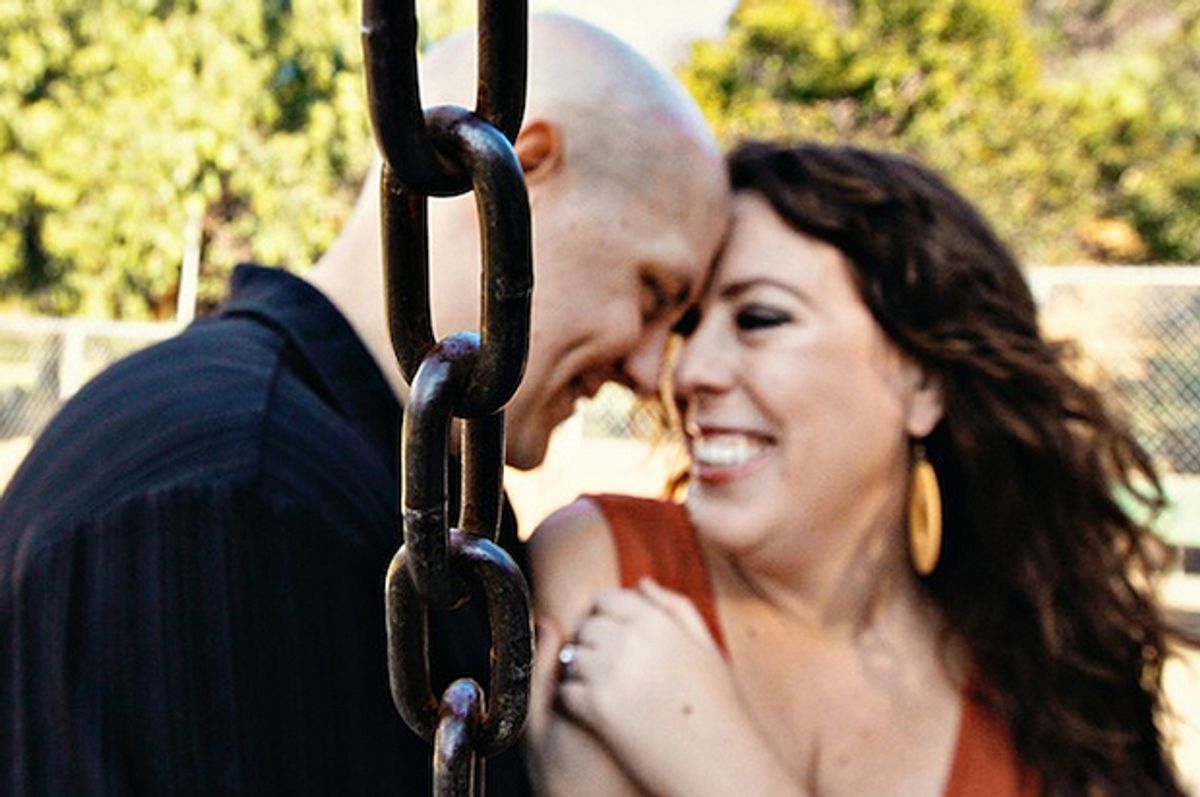 An engagement photo of the author and his fiancee.
--

Like most men about to be married, my engagement has been the equivalent of riding in the trunk of a speeding car driven simultaneously by my fiancée, Jen, her parents, my parents, the wedding planner and a bunch of vendors, all of whom are named Allison. My job, as I see it, is to get out of the trunk on the day of our wedding, put on a tuxedo, say "I do" and dance with my wife. I am fine with this arrangement because it's the one in which I am subjected to the least amount of "talks."

But there are times along the way when I have to emerge from the trunk to do things: taste the food that will be served at our reception, choose a tuxedo style and, recently, participate in an engagement photo shoot.

This is not a thing I knew existed. I assumed that on the day of our wedding a photographer would take pictures of us and we would put those photos in an album that we'd keep on a shelf until we needed to bore dinner guests into leaving. And that would be that. But like so many lessons on the steep learning curve that is being a man about to get married, I discovered there was this thing called engagement photos and they were part of my future.

Engagement photos have many uses, according to the 19 wedding magazines scattered around our apartment. (I just walked around and counted them all.) These professional photos can be used for save-the-dates, invitations, wedding websites, newspaper announcements and reception decorations. The wedding magazine the Knot says they can even be fashioned into "a mobile to adorn your escort card table," which, gun to my head, I'd guess is the table at the reception where the prostitutes learn where they'll be sitting.

Back when wedding planning was less complicated than, say, a moon landing, couples who wanted a photo for the local newspaper went to hometown photographers for a portrait against a studio backdrop. These photos were dull by design. The New York Times Weddings/Celebrations page still requests that "couples posing for pictures should arrange themselves with their eyebrows on the same level and with their heads fairly close together." (Because when you take me, baby, you take my unibrow, too.)

The advent of digital photography lowered the barrier of entry for a host of new wedding photographers and the Internet gave them a place to market and sell their services. Increased competition led to innovation. Enter the newly sophisticated engagement shoot, which combines a wedding vendor's willingness to sell additional services with a bride's refusal to let any woman who has ever been married experience something she herself has not.

Jen and I had our engagement photos taken at Lake Hollywood Park in Los Angeles. Our shoot appears to have been typical, and by typical I mean we were photographed repeatedly while standing on hills.

Our shoot included clothing and venue changes, both of which are common during engagement photo shoots, sometimes to extravagant degrees.

Venue No. 2 was a residential neighborhood near the Hollywood sign. We took photos with the sign in the background. We also were photographed on a random homeowner's front stairs and in front of a garage door painted like bookshelves. "Hey," I'm sure we'll look at these photos someday and think, "there was a time in our lives when we were so playful, and when our love meant ignoring sensible trespassing laws."

Laws? What laws? Anything goes at an engagement photo shoot. They are a departure from reality. Many are pure fantasy. The couples in these shoots seldom are photographed doing things they actually do, such as watching a movie on Netflix or having a conversation about why it's gross to brush your teeth in the living room. Instead they do things like:

-- Laugh maniacally while sitting on a large pile of firewood

-- Walk through a meadow while holding old-timey luggage

-- Hold hands in a field filled with pinwheels

Yes it's ridiculous. And it would be easy to write off engagement photo shoots as elaborate acts of narcissism perpetrated by magazine-fueled brides who will let nothing stand in the way of having a perfect wedding. I completely admit that I was not looking forward to this event, that to me it was one more chore I had to check off before climbing back into the trunk.

But it's also surprisingly fun. It's fun to say to your wife, "I am willing to embarrass myself in this field filled with pinwheels now, and as I fumble through our marriage in the years ahead, and someday as a dorky parent, because that’s how much I love you." And you know what? Something in the godforsaken, thankless, time-consuming process of planning a wedding had better be fun, damn it. (Yes, buying the dress is fun, but that's something she does with her mother and her best friends.) Planning a wedding is a void of joy for the couple. It involves awful conversations in which you must select who not to invite to your wedding and decide what important thing not to spend money on and compromise between people you love.

So it was nice to enjoy the goofiness of that photo shoot, during which I repeatedly instructed Jen to gaze upon me with increased reverence. (Jen responded by slugging me several times.) Also, standing nose-to-nose for long periods of time, which you will do on an engagement shoot, induces giggles. Sometimes we now pose like that just for fun.

At one point, Jen and the photographer had an actual discussion about whether I should stand on a hill with a Mylar or rubber balloon, which, thankfully, did not happen. Jen and I laughed about this the other night. Our engagement photo shoot is a gift that keeps on giving. Let's see the affordable-yet-reliable linen vendor hired for your reception do that.

Joe Donatelli is a writer in Los Angeles. He is getting married in September. You can check out his engagement photos at joedonatelli.com.