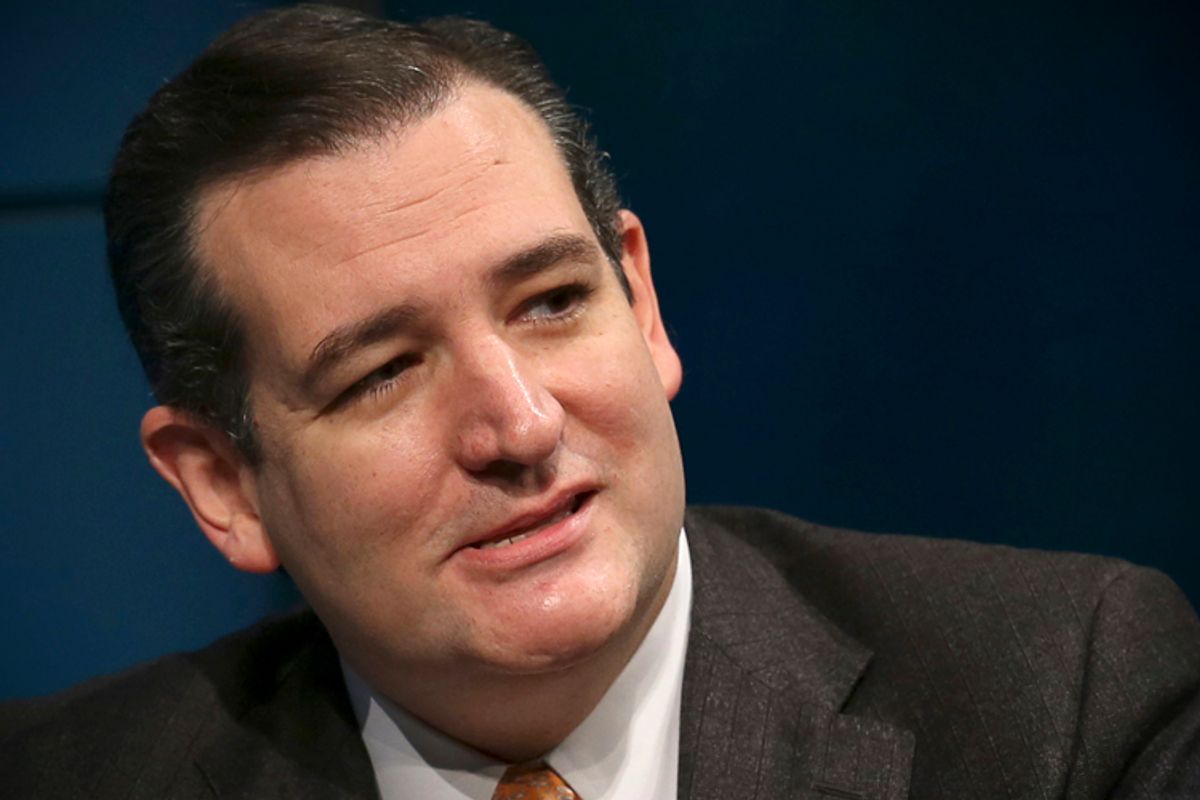 In a Tuesday editorial, the paper's opinion editors cast significant doubt on the Texas Republican's ability to assemble a winning coalition, arguing that Cruz's assumption that he can win by turning out more white conservative voters is fundamentally flawed and warning that the Tea Party firebrand's hardline stance on immigration makes him "a dream come true for Hillary Clinton," the likely Democratic nominee in 2016.

Blaming Cruz for "plunging" the GOP's favorability by leading the 2013 government shutdown -- part of a botched attempt to derail health care reform -- the Journal depicts Cruz as a polarizing figure all too willing to reflexively oppose anything the Obama administration proposes. The editors castigate Cruz as an "opportunist" for seeking to pare back government surveillance and for opposing the administration's abortive effort to authorize air strikes in Syria in 2013 -- stances that Cruz took despite a generally hawkish worldview.

As for Cruz's claim that Republicans like 2012 nominee Mitt Romney have lost because they failed to galvanize the right-wing base, the Journal allows that "Romney in particular failed to motivate enough conservatives." However, the editors posit, Cruz "is probably wrong to think that conservatives alone, especially white conservatives, can elect the next President," adding that the party's 2016 nominee "must broaden the GOP’s electoral appeal." Part of that, the editorial suggests, entails a softer line on immigration; continued opposition to reform will only prove a boon to Democratic efforts to keep Latino voters solidly in the blue column.

This being the Wall Street Journal editorial board, the piece is not without pot-shots at Democrats. Indeed, the editorial is framed around the notion that Cruz is the Republican version of Barack Obama. There are areas of overlap: Both began their presidential bids as 40-something first-term senators, both graduated from Harvard Law School, both are perceived as dynamic speakers, and both boast appeal among key segments of their parties' respective constituencies. Although the similarities largely end there, the Journal insists otherwise. Much as Cruz is notorious for his scorched-earth Tea Party tactics, the Journal would have us believe that Obama harbors "contempt" for Republicans and for the very idea of "work[ing] across the aisle."

In the latter half of his second term, Obama may have come to the belated realization that Republicans had no interest in cooperating with him, but the president reached this conclusion only after the failure of his assiduous efforts to woo GOP support. His 2008 campaign rested on the notion that he, not Hillary Clinton, would bridge Washington's partisan divide, and he spent much of his first term negotiating against himself in the vain hope that his proposals would garner Republican backing. There was the largely fruitless effort to secure GOP support for the 2009 stimulus package, for instance, and the months-long, ill-fated bid to get then-Sen. Olympia Snowe (R-ME) to vote for health care reform.

Obama's Kumbayaism was doomed literally from the start; just as Obama took office, top congressional Republicans decided in a closed-door meeting that the next four years would be ones of knee-jerk opposition to the president's policies.

Six years later, Cruz is telling Republicans that the obstructionists who run his party aren't intransigent enough. That view may be held by a large segment of the Tea Party, but even some of the nation's most conservative voices find it laughable -- and politically perilous.