Search for missing Alaska family of 4 comes to grim end 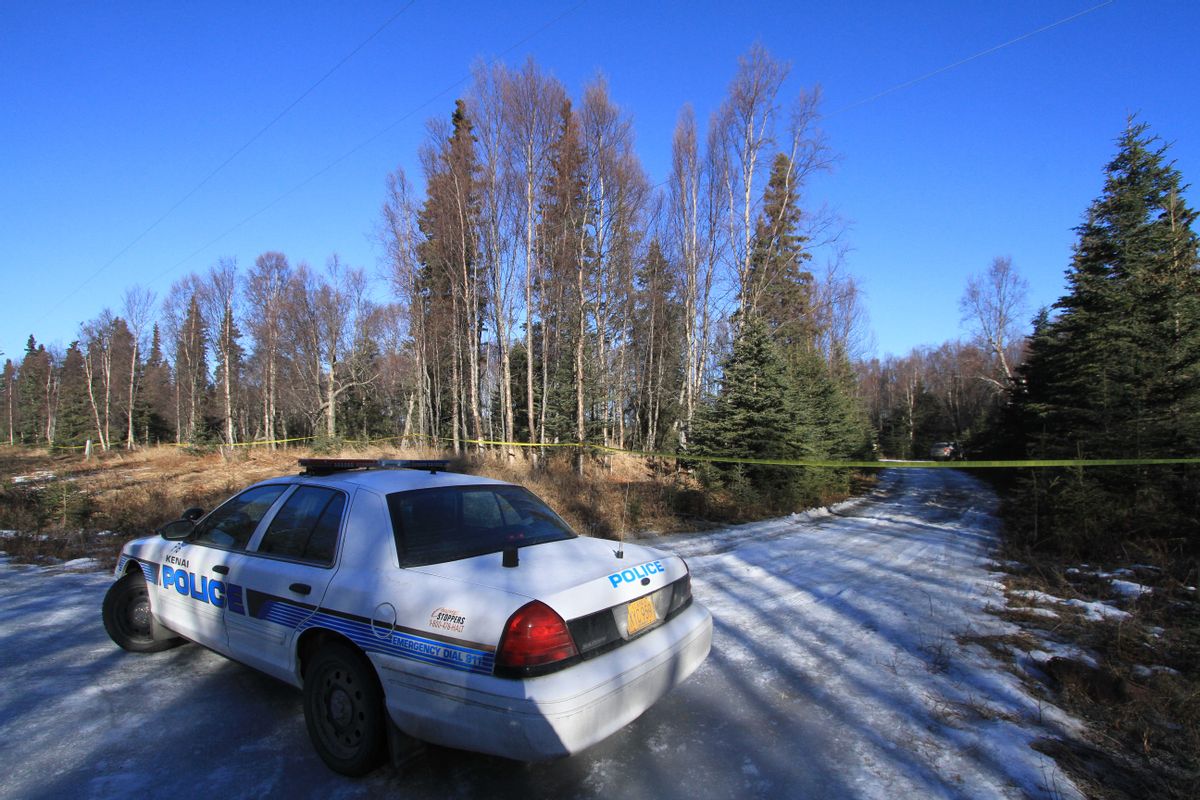 A Kenai Police Department patrol car parked on Alpine Avenue blocks an unnamed trail on Monday, March 23, 2015, in Kenai, Alaska. Human remains of four people were found Saturday night about 15 yards off the trail and Kenai police say evidence indicates they were members of family that has been missing since May. (AP Photo/Dan Joling) (AP)
--

KENAI, Alaska (AP) — A nearly yearlong search for a missing Alaska family has come to a grim end with the discovery of four bodies, a dead dog and a handgun just off a trail in a rural area near the family's home.

Authorities said Monday they could not comment on the circumstances surrounding the deaths but there's no reason to believe anyone else was involved.

Rebecca Adams, 23; her boyfriend, Brandon Jividen, 38; and her children, Michelle Hundley, 6, and Jaracca Hundley, 3, lived on a quiet street on the outskirts of Kenai, a fishing community of 7,100 about 65 miles southwest of Anchorage.

They were last seen in May.

At the time, relatives said it appeared the family left without packing. The couple's two vehicles were parked outside their duplex, and their rent for June had not been paid. The family's dog — an English springer spaniel named Sparks — also was gone.

Kenai police Lt. Dave Ross said Monday the bodies haven't been officially identified by a coroner, but authorities have every indication it's the missing family.

A gun found with the bodies matched the serial number from a box found in the family's home, he said. Officers also discovered other items reported missing from the residence, and a dog was found dead at the scene.

Ross said there's no reason to believe another person was involved in the deaths, and it appears the four people died where they were found.

He provided few other details, saying the investigation remains open and "is very much in an active stage."

The bodies were discovered within a half-mile of the family's home late Saturday after a person driving a vehicle on a trail spotted clothing and human remains and called police.

The bodies were about 15 yards from the trail, which is used mostly by four-wheelers and snowmobiles. They were in a slight depression in the ground amid grass and bushes, Ross said.

"If you were standing on the trail, you probably would not have seen them with the foliage the way it was," he said. On Monday, patchy snow covered the flat, undeveloped area near Wildwood Correction Center.

When the family disappeared, authorities conducted a massive search using airplanes, helicopters and dogs. It covered a wide area around the family's home, and divers at one point searched a pond. Twenty agencies participated.

"I can only speculate how close searchers may have come," Ross said.

Police said it would take time to positively identify the remains and complete the investigation.

Authorities said Jividen was an active hunter and outdoorsmen, but they released few other details about the family.

The father of her two girls, Jaramiah Hundley, died in a 2012 motorcycle crash.

Adams' sister, Lanell Adams of Washington state, previous told the Peninsula Clarion that she last spoke to Rebecca Adams on Memorial Day weekend. Rebecca Adams sounded as if she were in distress but wouldn't say what was wrong, the sister said.

Relatives later requested that police check on the family. When they couldn't be found, Lanell Adams flew to Kenai.

The four people and their dog were gone. Besides the vehicles, camping gear and the children's car seats were still at the home.

On Monday, the families of the deceased issued a statement saying they were saddened by the weekend's developments but would have no other comment.